Could the vaporization of all the oceans push away most of the air in the atmostphere?

You may remember my question here, part of which assumed that all humans would die in one way very quickly, with minimal destruction to the planet.

This question will ask about the way humans would die:

We all know about water's phase changes.

Let's say that the core of the Earth overheated, sending heat waves upward to the surface. The heat vaporizes most of the water, sending gas (steam) into the atmosphere. The gas pushes out most of the air into space and only steam remains. This effectively wipes out the human race in hours.

After hundreds of years, the steam contracts back onto the surface of the planet after Earth's core cools down due to human inactivity¹.

Is this a plausible theory? Could it actually work if Earth overheated?

Some quick diagrams made by me:

Before overheating of Earth: 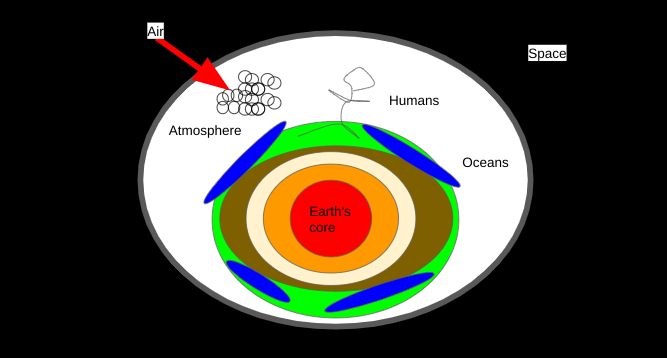 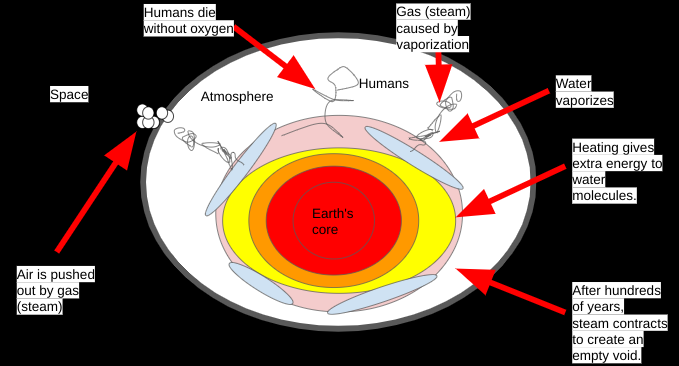 ¹As pointed out in comments, humans probably couldn't affect the Earth's core, but just assume it did for the moment.

I am relying on little knowledge in the scientific field so just tell me if I am being an idiot and my theory is bonkers.

Higher temperature would accelerate the loss of atmosphere to space - but water would be lost first.

Not the answer you're looking for? Browse other questions tagged science-based internal-consistency atmosphere climate-change gas .

19
Technology without heavier elements
23
Realistic sky of an Earth-like moon orbiting a gas giant (length of day and size of celestial bodies)
11
What is the maximum orbital time for my moon around my planet?
6
The Earth and Moon resolidify under a bluer star, their outer layers evaporated and burned away. What do they look like now?
3
Properties of an Argon based gas giant
10
How could a breathable ultra-high pressure atmosphere form?
5
TImeline of Rogue Earth
3
What (if anything) can cause a substantial and stable shift of the magnetic poles of a habitable planet away from its geographical ones?
2
What size/distance a planet should be from its star to have a dense atmosphere and not become a gas giant?
7
Can Advanced Matter-based Weapons Target Fast-moving Targets Deep in the Atmosphere Without Collateral Damage?