How to keep Utility Fog in place?

I was thinking about the concept of Utility Fog, programmable matter that can replicate a physical structure. They can be made to form air, furniture, and even entire buildings, with sufficient programming. 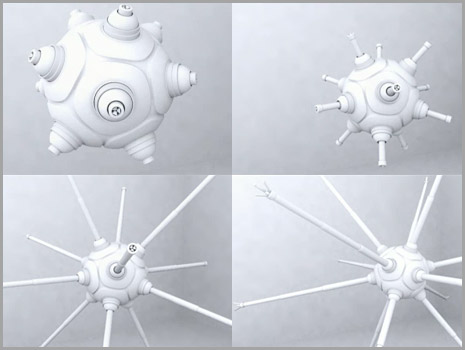 Given the case that they are mass produced to be able to create relatively anything, like the stuff I mentioned above, the next issue would be about how they can be controlled. Looking at the description from the site above, it seems that people have a direct interface with the Utility Fog, as if the Utility Fog was mind controlled, probably with a brain cap that allows for such an interface. So, when people think they want to have a couch rather than just a chair, the Utility Fog will respond to their thoughts and make just that.

However, I have realised a problem, that does not seem to be addressed. If people no longer actively think about what they want the Utility Fog to be, or turn off the brain cap, won't the stuff just collapse back into a bunch of nanomachines in the air? So, I wonder, what sort of mechanism or programming might help to solve this issue, keeping the furniture in place even when the person does not actively think about them.

It seems a rather trivial question. You've made something that can shape, colour and add properties (flex, conductivity, etc.) to itself to your desire. How difficult would the next step be that you consider an object finished or permanent and the fog to obey? Probably you barely need to spare the thought. Only if you would actively think of changing the object, the fog would change shape again.

Given that the fog is remotely controlled, it will be very susceptible to hacking. You might wake up one morning to find that a prankster has turned your bed into a skip, complete with garbage. Or your house might now be in the middle of the street and look like a Swiss chalet complete with snow but no bathroom.

As in virtual worlds, some people would specialise in creating objects and the rest of us would pay good money for the designs. As for the materials; we would order fog online. It would arrive in the shape of a human that would deliver itself to your door and then dissolve into a shapeless mass on command - or into whatever you wanted to purchase.

It would be the ultimate Lego for kids.

With regard to staying in the required shape, this stuff would stay where you put it until ordered to change. The connectors would be spring loaded to stick together and would require power to disassemble.

We have tons of machinery which has the very same "issue" when they are not used: printers, computers, cars, ships, rockets. Basically everything!

In your case the utility fog will still need to have a power supply to stay idle. If that power supply happens to be a RF source, the emitter of the can be configured in such a way that the power supply only extend to a certain volume. Anything that goes out of that volume will be powered off, and the buffer energy it has will be used to try to return back.

Fog does not stay together.

Like a robot servant who turns off the light when you leave the room, the utility fog would slump into inert particles when not needed. Everything in the room made of fog would dissipate into drifts on the floor. What would be left would be a non-fog AI - some Alexa like Argus entity which watches everything and knows where its masters are. When one of them approaches, Argus prompts the fog to reassemble the foosball tables, pinball machines and bar stools.

If you are not one of its masters, you would find yourself in the empty space. When you enter, Argus might ask who you are. Or it might already know. The fog is ready, and there are options for the fog in this space that are not as hospitable as the game room.

I would say the fog stays together using magnetic flux pinning.

This link explains the phenomenon: https://en.m.wikipedia.org/wiki/Flux_pinning

Now I don't know all the equations and stuff, because I'm but a layman but in principle it's when a superconductor gets enveloped in a magnetic field it shields it from all other magnetic fields and causes a repulsive force that pins it in place.

And since electromagnetism is stronger than the other fundamental forces, you could postulate that you could provided you had enough power use this phenomenon to create connections stronger than any normal matter. However I'm not sure as I don't know the math.

Now to make this possible you would make your little nano fog particles little spheres with connection points, half of them made of room temp superconducting material and the rest are miniature electromagnets.

Not the answer you're looking for? Browse other questions tagged reality-check hard-science materials or ask your own question.

6
Third World Countries societies created and populated only by young people
10
Is a mountainous crater filled with fog realistic? Ways for a species to penetrate the fog?
3
Does the probable heat of nanotech universal constructors make it infeasible in home environments?
15
Could keyboards + mice ever really become obsolete?
5
Reality Check: Low-Hanging Banyans
10
How Effective Could we Expect a Subliminal Programming Facility to Brainwash People be in the Near-future?
9
Mind controlling device - how to go on making one?
43
Electricity free spaceship
6
Visible light from the brain
1
Sanity Check : Utility Fog