Given early 1800's level technology, is it feasible to extract salt and fresh water from the ocean?

Suppose the setting is a small coastal island with only three towns in it. (I imagine it's roughly the size of the Isle of Man, perhaps a little bit bigger.) Technology level is roughly around the 1810's. Would it be possible to build giant boilers, fill them with seawater, and then boil them to produce fresh water?

Assuming this is possible, and assuming someone periodically cleans out the boilers, how profitable would it be to sell the resulting salt? Assume nobody else is currently producing salt this way en masse.

I'm from Brazil, a former colony of Portugal. In history classes we learn about this.

In centuries past salt was very valuable. The word salary comes from that. Portugal had been exploring salt pans as one of its chief exports before becoming a country - and that was in the 11th century! Seems like the first ones were in the Aveiro region, with a surge in the commerce of salt in the 16th century.

Around that time the colonization of Brazil was starting, and since we got more sunlight than Europe throughout the year (as well as very salty seas) lots of seawater salt extraction happened here. It was one of the most important economic activities around the end of the 18th century.

As for how it was done centuries ago, there is a whole Wikipedia page just about the process: open-pan salt making. It is quite lengthy and elaborate. But in short:

Look at the image below. The white cones are salt shoved manually. The piles closer to the workers are small because they are still shoveling on shallow water, whereas the larger piles in the background (which can be taller than a house) are ready to be shoveled onto trucks. The picture is from 1967 but the process back then wasn't much different from what they did in the 16th century. 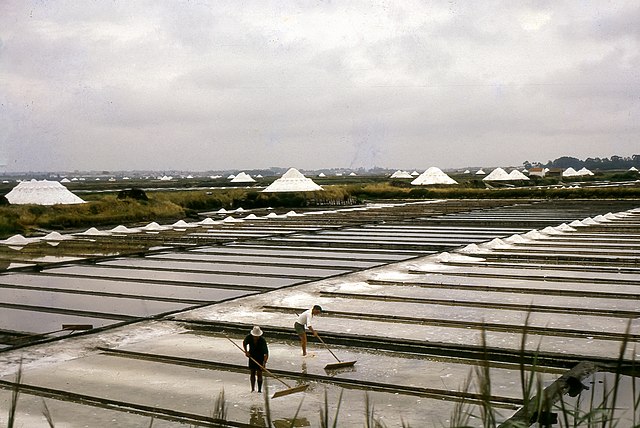 Source: the Portuguese Wikipedia article for salt extraction from ponds. This is the original URL for the image.

You won't get potable water in this process though. All the water is evaporated to the atmosphere. If you tried to get that water with 18th century equipment you'd probably have some heavy metal poisoning on the long run, due to the equipment you'd need to obtain water this way in industrial amounts and the chemistry and biology knowledge of the time. For potable water you do need to find a river in your island.

Distillation was well known long before the 18th century (it was one of the main tools of the alchemist, dating from the 1100s or earlier in Europe, and was known in Asia and Africa long before then). This will do both, as long as there's a source of heat to boil the sea water.

Boiling off the water will concentrate the salt; at some level, the boiling point of the water will rise the point you can't keep the distillation going, and you have brine. Some salt will crystallize as it cools, or you can continue to boil the brine to drive off the water and then dry the salt left in the pot.

The vapor from the boiling is captured and cooled, and produces nearly pure water (if the boiling is too vigorous, the resulting liquid may need another distillation to be drinkable, but this is unlikely in an early 19th century tech level setting.

Sure. Stills have been known for hundreds of years. Depending on the location it might also be possible to build solar stills just powered by sunlight.

However I suspect that sea water would produce some corrosion in a conventional early nineteenth century boiler and might not produce very good quality salt. It would probably be better to produce the salt in air dried pans as I doubt they would need huge quantities anyway with just three villages.

The Square-Cube Law already has a great answer for how to get salt. I am going to tell you how to get potable water. Your people will need a lot of glass to make solar stills, but they don't have tp be a single sheet of glass, lots of small sheets works almost as well. And they can do it, thousands of commercial greenhouses were built during the 17-1800's and this was the high end of things they could build from glass in the 1800's. 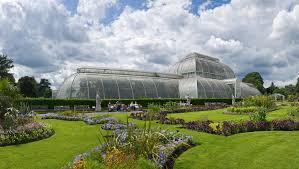 This is the Palm House in England. 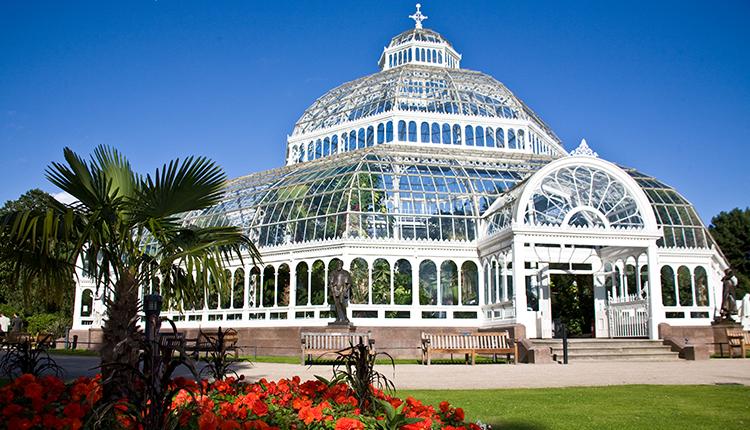 solar stills are well within their capabilities.

There are several designs you can work with. the glass need to be clear* but not necessarily smooth which is well within 1800 technology. They are slow but free energy wise. As a bonus the brine produced can be fed to your salt making fields. The steeper you can make the ceiling the better (better collection efficiency) but it also requires more glass. Single sided is the most common just because it is the easiest to build, fill, and maintain, but with a few pipes you can build all the designs using material from the times. If they are clever they will also collect rain water off the buildings as well as other buildings. 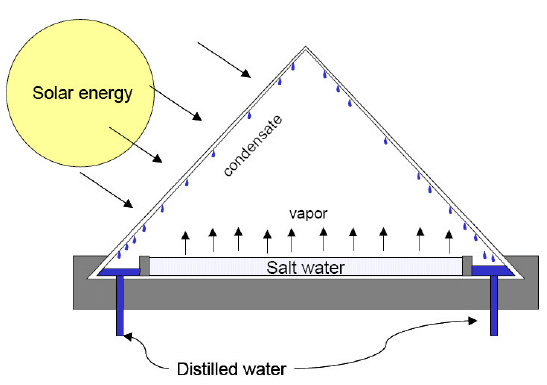 A solar still of 4 square meters (about the size of a king sized mattress) can produce about 0.8 liters of purified water per sun-hour. So figure out how much water you want and just do a little math.

*it doesn't have to be clear but it works a lot better.

Have a Volcanic Island

In addition to what Slarty said, you can have your island be volcanic so that they can build the still on a thermal vent. That way there isn't a problem of importing coal to fuel the furnace. The main reason saltwater extraction is so expensive is the energy cost, so by having a free renewable form of energy on the island it becomes much more economically feasible to produce salt.

Feasible: I seriously doubt it, you don't have plastic sheeting, that's going to be an awful lot of glass in your solar still.

Condensing fresh water form saline water from salt lakes, via boilers, was done during the initial gold rush era in Kalgoorlie, Western Australia, from the mid 1890s until supply of water via a 600 km long pipeline from the coast in 1903. Such plants also produced salt as a waste product.

Vast amounts of timber were used to fuel the boilers.

Building something similar on an ocean coast would have been possible. 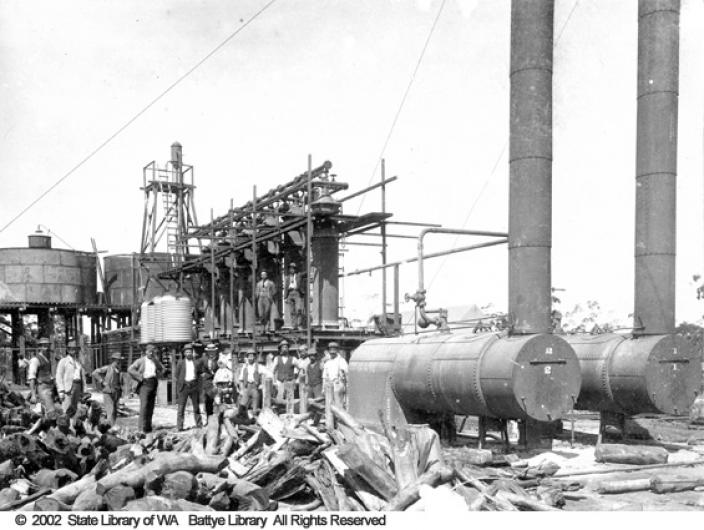 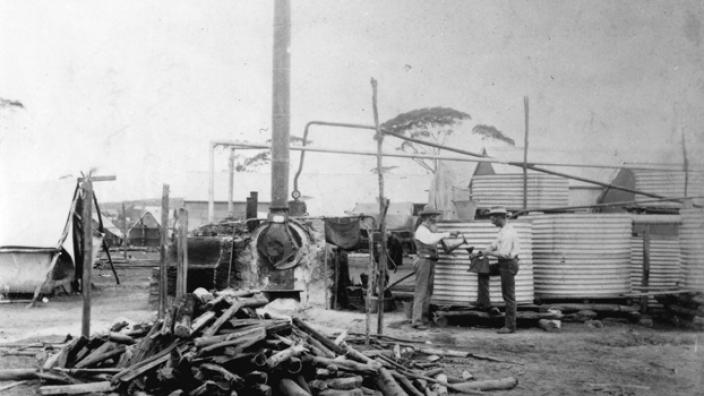 This is an addition to aspects raised in a range of answers and comments.
How to produce water vapour has been well covered.
The all important "How to turn the vapour back into liquid water" has been less dealt with.

It has been generally demonstrated that in the time period and specific conditions stated:

For condensation what is required is a water vapour impermeable barrier that allows heat transfer between the vapour and a cooler external environment. The external "coolth" source may be active coolant, such as water *potable or otherwise) or a "tunnel" which is protected from external heating.

One method would be the provision of a thin "leather" or similar material membrane which is cooler on the outside and which allows water to condense. Where available glass does this well enough. In the context given fish should be a readily available resource and "fish leather" would be an unusual but viable option. There is a vast amount of information on web re fish leather its creation, use and properties.
While it is something that many people are aware of it is "very much a thing" and would serve this purpose well.

Another solution is a "cooled tunnel" that water vapour is channelled through. This could be rock or glazed clay or any other material that will remove heat. Wood would work but not as well as some other materials. Even discharging water valour into a cave would work. The aim is to reduce temperature to below the dew point at current humidity - lower temperature will remove more water from the air.

Copper and lead has been easy to obtain since Roman times, lead piping could be used for condensers, indeed the smelting of lead actually used condensers long stone tunnels running uphill to chimneys where the lead vapour evaporating from the furnace would condense on the stone walls.

You could have done this into Roman times without too much difficulty. Using sea water for cooling as well as the source of the water.

Depending on the latitude, take a metal drum (sheet metal folded into a cylinder and welded, with a circular bottom welded on). Paint the outside a dark colour, fill with water and leave in the sun.
Dig a deep hole in the ground (2+ metres)and put in a large earthenware pot of similar volume to the drum. Make a lid for the drum with a hole fitted with a pipe connected to the pot.
By the end of the day, with a 50 litre drum, you should have 10-20 litres of water in the pot, more the more airtight the system is. The drum will have a concentrated salt solution, which can be poured out into a salt pan to get crystalline salt. No further water can be extracted from the concentrated brine.
You will need to replace the drum frequently, as the brine will corrode it within a month.

A really, really good read on the topic, written in 1862, compares several methods of obtaining salt through evaporation, and even gives the yield per acre of evaporating ponds.

How to Make Salt from Sea-Water: 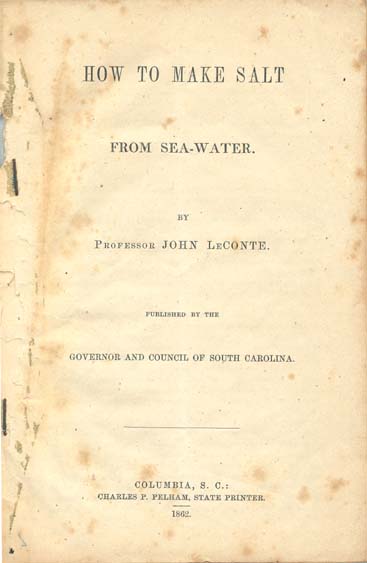 Transcribed into digital format. Much too extensive to duplicate here, but it covers a great number of methods for evaporating sea water to obtain salt.

Not the answer you're looking for? Browse other questions tagged economy ocean industrial-age .

37
What methods might an ancient civilization use to desalinate sea water?
3
Desalination ice ships

5
Could a marine plant have a salt-filtration system for when plants suck up the sea-water (providing a source of fresh water?)?
4
What technology would be necessary to allow soldiers to ascend rapidly from deep in the ocean and to the surface?