How to design a secure private estate that can be stealthily infiltrated and exfiltrated? [closed]

Ask Question
Asked 7 months ago
Active 7 months ago
Viewed 842 times
5
$\begingroup$
Closed. This question is off-topic. It is not currently accepting answers.

I am trying to design a present day environment which is semi-realistically secure but at the same time has some realistic weaknesses that can be exploited. The aim is for this weakness(es) to allow a single person to:

The focus is more on the exterior design of the property rather than the interior design of the building. So once they are in it should be fairly smooth sailing (unless that's unrealistic of course) as a private owner will live there and be there while this takes place, it is the getting inside that should be the challenge. 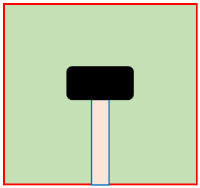 Security Ideas So Far (I have very little knowledge in this area so happy for suggestions, but these ideas have come to mind): Security cameras on perimeter fence, some kind of security system for the house to detect broken windows and intrusion? I'm not sure whether to have some armed security inside &/ outside the house since wouldn't their patrols trip the security systems?

Infiltration Ideas So Far (again please suggest what is realistic/semi-realistic): Underground basement or cellar, roof skylight, guard doggy door, window or door that can be secured upon exit again (I want to avoid anything that will obviously damage things such as drilling, digging, blasting holes etc as this is supposed to leave no trace behind).

I look forward to your suggestions. Thank you

You'll have water access, a squiggly border, a road that cuts off the corner, a swimming pool, adjacent greenspace, a tennis court covering a safe room built by a previous tenant, etc.

Sit down and find an in-reality secured location. Here is a satellite picture of camp david.

This is an extremely secure location, but it isn't an optimally designed fort.

Devoting 90% of your estate's land to security really sucks. You'll want to use that land instead of filling it with sensors and guard dogs and the like.

"Sensors" that detect people breaking fences, windows, notice movement are great ways to annoy your active security staff. Either 99% of all alarms will be spurious or you will have gaping holes that let someone bypass them without setting them off.

Guard dogs can't be "on" all the time, because you have to maintain that garden area, and aggressive guard dogs with gardeners around is going to either blunt their aggression or result in injured gardeners.

Attackers can choose where and what to attack. Defenders have to spend resources on preventing every possible attack.

If the crime boss leaves the compound, they are going to be infinitely more vulnerable than inside the compound. So resources are better spent on non-compound security after a point.

The point of the compound, if the family lives there, is to feel secure. That means obvious security has a cost; you don't want to see people armed with automatic weapons when you are having a birthday party, because even if they make you more secure they make you feel less secure.

So effort will be put into moving the security out of sight of the home as best as possible.

That means a hardened perimeter, and less hard interior. And you don't want too many sensors in the main house, because false alarms are annoying; when they do trip, you'll send a low-threat appearing "friendly" security agent to investigate it (because almost all of the security sensor trips will be the 12 year old opening a window they aren't supposed to, not a super-thief).

Maintaining a mansion generally requires a lot of workers. These workers need to come in and leave, and they in turn need to have supplies and services for themselves.

If you have a personal cook, 3 gardeners, a mechanic/repair person, and 3 house keepers, plus a dozen security, now you need to feed those people (another cook) and manage them (major domo and a head of security). You have guard dogs. They'll need a handler on-site, possibly all the time (part of security? Sort of a different job). Now you have a staff two dozen!

These people need a place for breaks, and possibly even sleeping quarters.

All of those people open up security holes. How many have drive-up access? How extensive is the searching of the food supply delivery?

Of course, maintaining 24 people at decent salaries means that the cost of this estate just blew up. If they aren't at decent salaries (including overhead), they aren't going to be as well vetted in practice. And who wants to pay gardeners great wages when you can pay an illegal immigrant under the table? Yet another security hole.

Insider Threat
Once upon a time, the gardener and the driver would have handled routine maintenance of the grounds and the car, respectively. They lived in the servants' quarters of the mansion. These days it is done differently. There is a landscaping company on retainer. They are supposed to have high standards, but you know how it is, someone calls in sick and ...

Variant, senior staff live on site and they are allowed to bring visitors. The mansion is secure, it is not a paranoid prison. Logged in and logged out, of course. Either find one who can be blackmailed, or one with a weakness which can be exploited.

Cyber Threat
Since the last upgrade, there is a computerized security control center. All guards who are out on the grounds after sundown carry wristbands with little heartbeat monitors and position transponders. When an alert on the motion detector coincides with a transponder position, it is ignored. Except that the software has a vulnerability. No Such Agency knew about it and either used it or corrupt agency employees sold it to organized crime. Someone with the right hacking tools can play the security center like a fiddle.

Trouble from the Sky
L. Dutch mentioned the threat model. Assume that it does not include powered hang gliders. Someone can make a controlled landing on the roof and take off from there, which was not practical with old-style parachutes. The hatch near the chimney is not alarmed.

Considering that normally security is designed around a specific threat model, what you can do is leave some holes in your threat model, so that the security system has some blind spots that your infiltrator will exploit.

Example: you mention cameras and broken window detection systems. When the security system was designed the trees in the garden were much smaller, and the safety was focused on monitoring the ground floor only.

Now the trees have grown bigger, and some of them project their branches over some balconies. One balcony happens to be where a window has been left open (you know, changing air in rooms is a good habit, and we are at the second floor here, at most a sparrow could enter the room), a lightweight infiltrator could use the three to reach the balcony, the open window to enter the house and leave it after hitting the target.

Lean into the Heist

Many heist movies/books have two layers to the heist, one where they trick everyone into believing that one thing is happening, and a second where they actually do another. So you might have an obvious perimeter breach which scares the owners. They call an outside security consultant in to resolve those flaws, but the outside security consultant is actually the protagonist and while getting a tour of the building steals what he needs in plain sight.

Build an escape tunnel, allowing the occupant to safely escape from their panic room to a secluded point outside of the wall if sieged. The kind of person who wants an estate this secure is likely to want an escape tunnel too. This becomes your entry point, as it will lead straight to the inner sanctum. It's camouflage , and not disclosed to the security guards on the front gate who are paid hourly - as they're afraid of insider threads.

If you design and install it, you can design a way to open it from the outside without raising an alarm - it depends on exactly how the secret door is hidden, but a removable door jam should do the trick. For the alarm, my suggestion: install magnetic reed sensors that clearly look like they'll trigger when the door opens, and will if tested by a paranoid resident, but install them close enough to the exterior and oriented such that a magnet on the exterior will keep them in the closed position.

Your secret agent simply needs to bring a magnet and whatever tools are needed to remove the door jam discreetly (screwdriver? depends on how its hidden of course). They enter the secret passage, get into the inner sanctum, do the task, leave, reseal the door jam (screw it back in), and then remove the magnets suppressing the alarm.

If the same company is building two estates at once, you could dig the basements together and join them together with a secret passage.

By respecting the privacy of the occupants, the security is all on the outside of the building - The kingpin in the estate doesn't care for security to hear the details of his private "business" dealings. And added benefit for the thief is that once they're in there is no more security.

Not the answer you're looking for? Browse other questions tagged reality-check construction architecture security or ask your own question.

30
How would the design of a habitable underground fortification differ to that of a castle?
12
How would antigravity change the design of cities and buildings?
12
How to Design a Plague that Causes Insanity?
5
How can I design spacesuits for Anthills?
7
How deep can, historically or realistically, aqueducts and/or underground pipeline systems get?
2
How can I design a magically-induced coma?
3
How to design a ship class around single nuclear reactor and single shipyard?
3
How to design and build a fortified compound in a 12-hour daylight period?
5
How would secret government organizations secure cooperation with police and military for their agents as well as civilians?