What would infrastructure look like on Interstellar's "Miller's Planet"?

In short, Miller's Planet is described as a "potential habitable planet" with very massive tidal waves as tall as 4,000 feet. If for some reason, life began in this planet and is destined to evolve to be as smart as Humans, how would they be designing structures that should be built on raging water with usual tsunamis? What would this structures look like? (A graphic representation is a plus)

Note that the lifeforms that would start here will begin without any access to advanced technologies of any aliens.

Build INTO the ground - literally.

A normal building would have a problem because of this:

So the solution is simple. Don't get hit. Dig Build like this:

In other words, you wouldn't see the buildings. You'd have a lot of entrance hatches on the ground though.

This is a very broad question (starting with, what would life be like), so I'll assume and Earth-like progression of life.

The first coral-like structures evolved to be hardy against water erosion - they had to - and adapt to rise above water-level. Your big wave now just washes over and around their pyramid-like structure. After more and more structures mitigate against the strength of the surge. Other life soon follows, and life among the coral cities.

Your advanced peoples build gently sloping ramps, and soon the wave is a non-issue. The architecture looks much like the pyramids and ramps of the hardy coral. 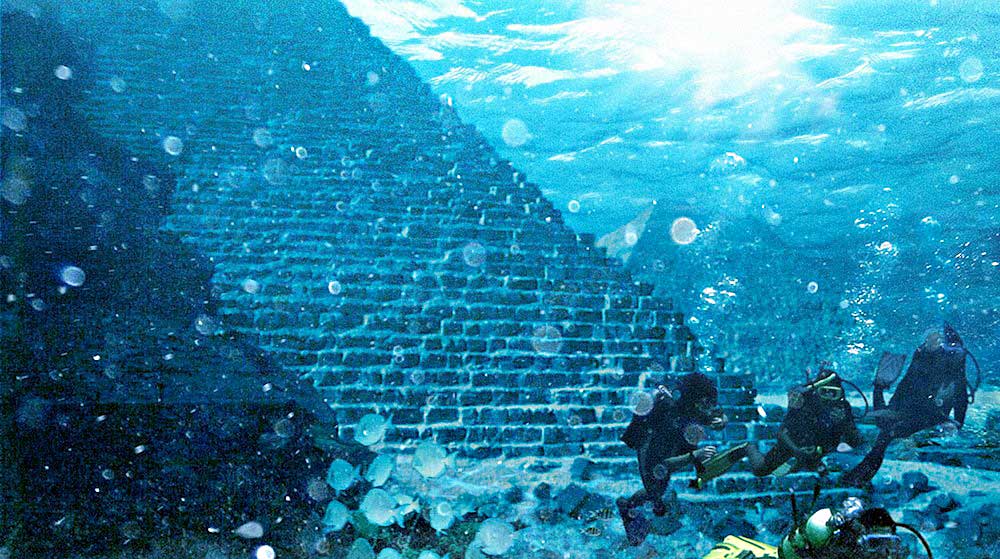 Life evolves entirely in the water and evolves to go underground rather than to breathe air, and the wave is a non-issue.

Honestly, there's a lot of speculation that can happen here.

Structures could survive in deep water, or even on the floating artificial islands on the surface of the ocean above deep water

The wave height shown in the movie is largely due to wave shoaling's amplification of wave height in shallows:

Tsunamis don't swamp seagoing ships that are underway out over deep ocean.

I would say, they would likely be at least amphibious beings or more fishlike. Can live under water. As such much of their building can take place below the oceans waves where tidal waves will have much less effect. The other option would be far inland where the waters have lost most of their destructive force and are just strong currents.

Under water, they can be any shape imaginable, even to the point they can sway in the ocean currents like sea weed. Which might be what the actually use to make their homes.

I don't think life would evolve to any kind of tool development on Miller's world because of the very long list of conditions described in this other answer. There's just no calm enough place to develop fire or tools, which are prerequisites for building any kind of human level infrastructure.

Life would pick one of at least two strategies for living there. A filter feeder attached to the bedrock or a free-floater living in the standing wave. The closest earth analog to the ecology of Millers' is a tidal pool habitat.

As mentioned elsewhere in the comments, there are multiple interpretations of the waves. I'll stick with the sloshing, so that it is entirely possible that the waves are only present on the side of the planet that faces the black hole. In this case, the planet rocks forth and back by a small angle, and the wave is basically fixed.

In this situation, the path of destruction due to the wave is rather limited, perhaps a couple of degrees, and most of the planet should be "safe". Intelligent life can safely form on the outer edge of the path of destruction. Provided that the wave is directly in line with the black hole, and the planet oscillatory tilt angle is small, there should also be an equally small (safe) area that also experiences a day and night cycle (one hour, in the case of Miller's planet).

Provided that the waves are not the real threat, as long as one chooses the right place, the real issue with building structures would be to deal with the forces exerted by the black-hole. I would expect pyramidal, or small dome structures to survive better than towers or stilted buildings. Given that the planet rocks forth and back, that it is tidally locked, and that the black hole gravitational pull is typically not perpendicular to the surface of the planet, we should expect a non-negligible amount of shear forces along the z-axis (the height) of any structure. Reducing the height of the construction and increasing the section should reduce the chances of failure. Among flat structures with a large base surface, pyramids and domes have a better distribution of inner stress components and are easier to build compared to rectangular blocks.

A pictorial representation, the green area should be safe from the waves: 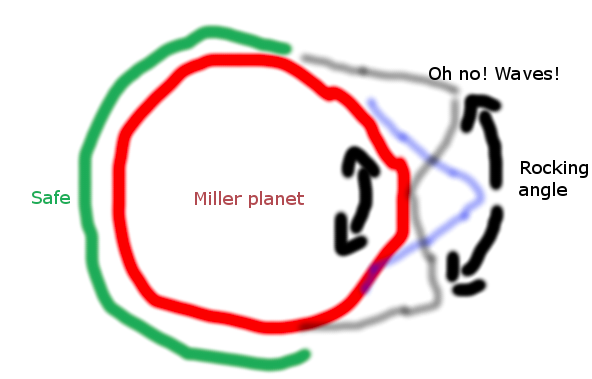 Their buildings would float, simple as that:

Vast mats of linked pontoons would rise and fall with the waves; walls and roofs would flex to conform to the expansion and contraction of the undulation of the flooring substrate, perhaps little more than canvas-like fabric drapped from ropes strung between poles. Nets would hang in strategic places to catch anything dislodged as the flooring tips, and anything of value would either be lashed to poles or tied down to the pontoons.

The leading edge of such structures would probably come to a point and curve upward to help stay above the first swell of the approaching wave, much like a canoe. You might imagine a 'town' as a series of parallel outriggers linked laterally: 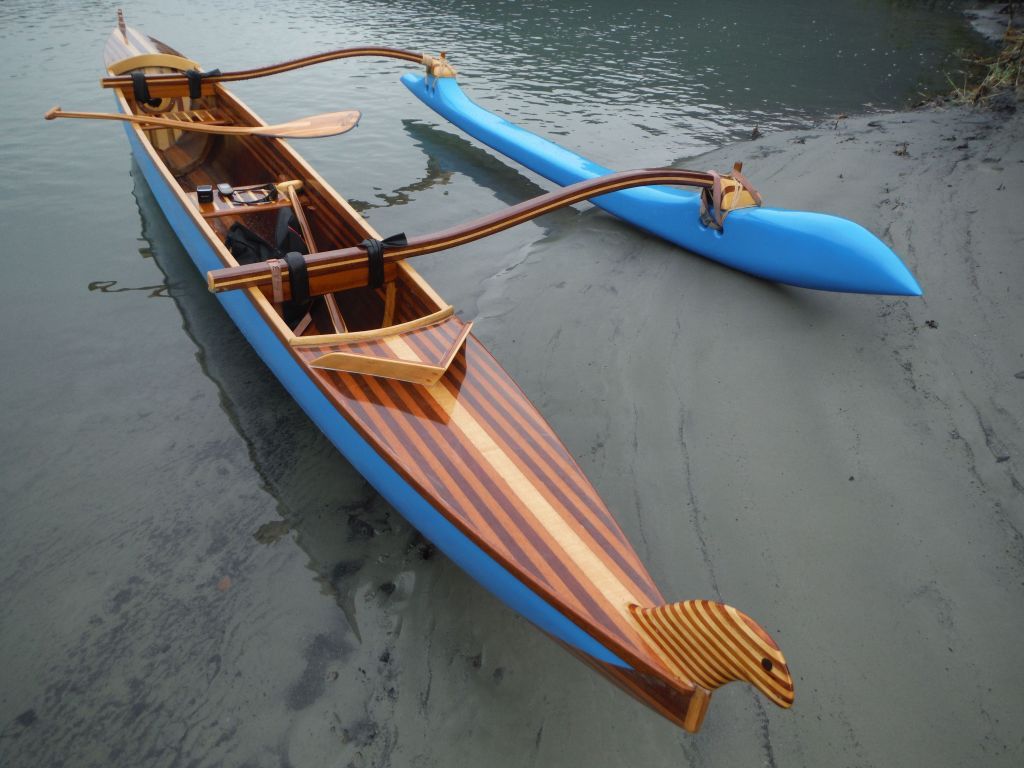 I believe that the cities should be built on the poles because the water is frozen and because Gargantua is only visible on a small part of the frozen poles, making the tides lower.

We generally do not build on the beach, or in marshes for a similar reason to your aliens -- the technology we have at the time can't cope with the shifting sand, rush of tide.

I'd suggest that, similarly, your evolving air breathing species' on a 1.2 km-tide planet would build their structures in the areas that are high enough to be safe from the waves. They'd consider the area under the surf to be unsuitable for building.

However, to answer the question : I think your evolving species would start with whatever dry ground is available.

Not the answer you're looking for? Browse other questions tagged architecture .

97
Is there a scientific explanation as to why aliens should look similar to us?
11
Materials in a tidal water world
7
Massive tides and resources
4
How would intelligent life evolve on an Earth-like planet with dangerous high tide?