Would the internet be intact in 3021 without human maintenance?

I am new to Worldbuilding, so just give me a heads up if this is off-topic or too open-ended.

Let say that today the entire human species were wiped out this month (not relevant why). Humans were wiped out in a non-violent way. Wars or nuclear power did not cause the human race to cease to exist. This means that most data buildings and data towers were fully intact when we went extinct. Of course, due to neglect, they would probably break down over 1000 years. The extent of how many working building and data towers endure over 1000 years is up to you.

Over the course of the next 1000 years, intelligent life forms will have no presence on Earth until an alien species discovers our planet in 3021.

When the alien species arrive, would the basic premise of the internet still work?

It wouldn't need to be in today's complex form, I just want to know if a basic form of the internet would remain.

So, without any maintenance, could the internet work/be salvageable for these aliens?

And when I define work, I mean that the essential feature and base of the web is up and ready to run. (like data and original code, although search engines would be useful.)

If there are things that I'm missing, just let me know in the comments! I'd be happy to provide more information.

I also saw this related but not duplicate question, and this question, which I have put here for reference.

Over confusion in comments, I decided to clear up my question. Yes, I am pretty much asking if Google's servers in Silicone Valley would still be powered-up/working.

The First Destruction
Without intervention, the power grid would almost certainly collapse within a day or two. After that, only emergency power (battery backups, backup generators) will be left, and that won't last long. All the servers the Internet is stored on will become subject to the forces of Nature: temperature, humidity, animal & plant life activity.

Chances are good various disasters -- not just storms & earthquakes, but also ordinary gas leak fires, chemical disasters, water line floods, and the like -- will destroy much infrastructure pretty quickly, without firemen to contain the fires. Whatever survives the fires & storms will be subjected to a thousand cycles of freeze & thaw and the advance of vegetation. Take a look at Pripyat, to see what a city will look like after only about 50 years of abandonment. 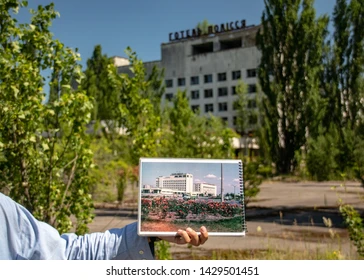 The Second Destruction
If that weren't bad enough, the devices the Internet are kept on are not designed to last long. Modern tech just isn't well designed or built. Things will fall apart, dust will clog everything, rodents will gnaw, wind and water will destroy. Moving parts will corrode and become useless.

The Third Destruction
And at last there's the Great Decay. After the people leave, no one will be around to continuously maintain the e-infrastructure itself -- the data. Most of it is stored on hard drives; some data is kept on CDs, memory sticks and, yes, floppy disks!, but not the Internet itself.

None of that data will last long: hard drives will fail, if not mechanically, then magnetically (this source says rather less than a century). Other magnetic media, like tapes and discs may last several decades. Other media like flash drives may last longer, but without working computers and the hard drives that make them go, your future xenoarchaeologists will be out of luck.

Lastly, it should be pointed out that even if they could find a working hard drive of any kind, they'd have no idea how to get the data off it, or even what the remaining data even is. Even if they learned human languages, which they could do from inscriptions on stone or metal, there'd be no resources for them to crack the code: no books on how people write code, no resources for operating systems, no manuals to help getting the machines turned on even. This, of course, is because all the cheap paper those manuals would be printed on would have deteriorated long before the aliens ever showed up!

Probably the only books that would really survive are older books printed on extremely high quality rag paper and lucky enough to be in an environmentally stable location. And none of those books will be coding manuals!

Not the answer you're looking for? Browse other questions tagged technology aliens internet future .

22
Would a frozen Earth "brick" abandoned datacenters?
4
In a major war what would happen to the internet?
-3
Could the vaporization of all the oceans push away most of the air in the atmostphere?

9
How would aliens recognize communication coming from Earth as communication?
2
How will language work without sounds or body language?
14
Writing system of blind, sea dwelling sentients?
3
How could we clone an alien?
2
What Factors would Likely Govern the Degree of Similarity between Intelligent Aliens and Humans?
2
Adult-sized alien child and child-sized alien adult
5
What would be different in the brain of a being that lives hundreds of years allowing it to have enough memory space?