How to design and build a fortified compound in a 12-hour daylight period?

Situation Overview: A group of 16 (actually 100, but the others aren't relevant here) people have suddenly found themselves transported to a different world. It’s a hybrid setting, with tech and magic. The magic system is fairly standard(ish), but it's limited only to the teenagers in these displaced people, for plot reasons.

In the group of 16, there are only three teens with magic (one without, but again, plot). These three have access to Ice, Fire, and Earth magic, but can't actually use them very well yet. The earth mage (the obvious choice) can make walls to an extent, but can't build something with a roof that doesn't collapse, yet.

The 13 remaining people all have some access to equipment from our world through a system store, but can't currently afford any earth-movers or other heavy machinery. Access is limited to items the characters are intimately familiar with and priced according to familiarity and complexity. In other words, the resources available are pretty much only what they have on hand for the moment plus or minus a few small items.

Current tools and resources available: 16 people of various ages (see below for more info), one hand axe (hatchet), one entrenching tool, one sniper rifle (.50 cal), one pistol (.40 cal), five assault rifles (5.56mm), one first aid kit, one battlefield trauma kit (? not sure what the name is, or if it has one), many dead owlbat carcasses, also forests nearby. Access to water and food is covered through the system store.

Human resources: Two British material chemists, one fresh college grad with a biology degree, one surgeon, one civil engineer (road construction focused), one US Customs agent, two USAF pilots (rotor and fixed wing), one USAF pararescue jumper, one retired SEAL (medical-lost leg), one US Army armor officer, one USN Captain (destroyer skipper), the magical teens mentioned above, and the last teen who is more or less an insurgent/child soldier (she grew up in a warzone, scout/sniper specialty)

The location: The build site is on a rocky outcropping that's about 455 acres. It's bordered east and west with tropical forest (jungle), south has a smallish 20ft cliff (sheer drop) down to the ocean, and north has a small, brush covered mountain (around 1500-2000ft). Mountain hasn't been explored yet, nor has the jungle past a few hundred feet. The current camp is located on the northern edge, close to the mountain (about 20 feet from the base of the slope) and about equidistant from the jungles.

The problems/limitations: Only 12 hours of daylight, plus or minus. The daylight hours are somewhat calm, dangerous creatures can be encountered in the jungles but most avoid the rocky outcrop except to transit to the other side. At night a predatory species of owlbat (bat-like body and wings, owl beak and claws, sensitivity to sound and bright light, size can vary from house cat sized to medium dog sized) comes out in large numbers. They are less than friendly and can fly, obviously, so walls are of limited use. There is also a species of rock lizard that spits a viscous goo that acts like a high-explosive variant of natural napalm when set alight (the lizard can't light it, though). Moving camp isn't a viable option, the jungles are far more dangerous as the pistol and assault rifle are woefully ineffective on the larger wildlife (boars the size of a VW Bug).

How to build a credible (read: believable) simple fort in 12 hours?

Best answer would be one that can give a credible design for construction of a defensible campsite/compound while considering the limited resources, time, and location available. Must be able to defend (or at least protect) from aerial and ground predators. Ideally, it would be expandable over time.

The owlbats seem like the only real threat here (everything else is defeated by a circular wall raised by the earth mage and some sharpened sticks at the worst). However, predators do not generally take fights against significant resistance, so we don't need to actually be able to kill whatever comes at us: just be scary enough and capable of throwing out enough damage to get them to go hunt something else. I'm also assuming minimal use of the system store, so I'm going for using that to get tools and building your own defences: feel free to substitute pretty well everything gathered/made here with purchased alternatives, if you like.

My suggestion would be, if you don't want to go for "just bury yourselves":

And that's it. No predator is going to hurl itself at a wall of spikes, no matter what's on the other side. Honestly, this is already hopeless overkill for dealing with predators: you could probably get away with just building a big fire to sleep near, if you're only worried about non-intelligent predators.

Step one: collect flammable material from the edge of the jungle/brush from the mountain. Preference should be given to things that cause a LOT of smoke and burn slowly (Can be avoided if the pyromancer is the "can make flames appear and burn without fuel" type) This should essentially be what everyone not the pyromancer/earthbender is involved in for the entirety of the 12 hour period. The pyromancer should be resting, they have a busy night ahead

Step two: While the fuel is being gathered, Earthbender should create a 15ft circular wall around a space capable of fitting your entire party and the fuel they've gathered comfortably. The wall doesn't need to be particularly thick, it's there to mask your party from view of whatever megafauna might be around. Ideally they just raise up a circle of 3 inch thick stone or something.

Step three: Earthbender creates a ditch in front of the wall, 10+ft deep, wide enough that nothing can jump from the far side to the wall itself. The depth should really be as deep as the earthbender can manage, so when the rest is set up they should spend the rest of their time deepening/widening the ditch.

Step four: Raise up pillars of stone/earth 12ft tall, with a slight depression at the top (think a shaft with a bowl dug into it). they need to have a cross section of a couple feet. Top them off with piles of wood/other fuel. You want these every yard or so.

Step 5: At dusk/when owlbears appear, light the fires on top of the pillars. The pyromancer's job is to keep those things burning all night. Depending on your cast of characters and the power of your earthbender, you might have shifts which climb makeshift ladders to pile more fuel on, the earthbender might lower low-burning pillars to add fuel, or raise up temporary "steps" so they can be refilled.

What does this get you? The wall/ditch should obscure you from view, and be enough of a weirdness to keep the larger predators away. The smoke will mask your party's scent. The combination of fire and smoke should also keep the owlbears from wanting anything to do with you. If your party does things particularly well, the walls being several feet higher than the fire-pillars will also stop the flames from being seen from a distance, which also helps keep away the curious come nighttime. When dawn breaks the earthbender lowers a patch of wall, fills in the ditch, and off you go!

Sidenote: If your walls need to be of any serious thickness (several feet) then you'd also want some spiky vines, a "step" with more fires on the inward side, or worst-case fires around the top to prevent the owlbears from landing on the wall and then slipping down the inside in the night. Mind you this whole thing is overkill on my part, you could easily get by with a ditch, three fires around the perimeter, and a few sharp sticks. But as they say there ain't no kill like overkill!

Your civil engineer will have a strong background in Earthworks and will be able to advise your geomancer in how to build a sound structure even without being able to build traditional ceiling. First displace a torus of Earth like a large foxhole, then raise up a bunch of stone pillars that can rest against the torus of earthwork and come together as a cone. Since they are not flat horizontal, they are not under nearly as much sheer as a flat "ceiling". This puts any stones your raise into a state of compression instead of tension which pretty much all rocks do way better in (and why you can make a wall but not roof). When you are done you will basically have a cairn or barrow like structure. If there are any gaps too big, just keep stacking stones until the animals can't get in.

When you have it down to one way in and one way out, have everyone climb in and seal the hole off for the night. There will be enough gaps in the stone to breath, but nothing any predatory animals can get in through. 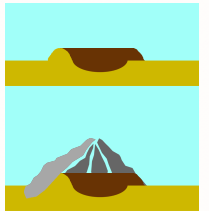 Why could you not create a house? Yes, you can!

Building a makeshift house is part of survival basic knowledge your SEAL should have; This, along with a civil engineer (even when not specialized in house building), a mage who can create trenches, walls and/or even out a platform to build on, they shouldn't have issues building something which is reliable enough. For the roof, using overlapping sticks along with big fern leaves -or equivalent- on top should do the job. Most if not all survival manuals should be able to detail more accurately how to do this than me, if you're interested.

Also, note that if the people stay quiet and undercover, lighting no fire, there is no reason for the owlbats to tear the shelter apart to hunt them, there should be targets which are far easier to get a claw on and which you can be a lot more certain they are there. If they are attacked, then it's likely they are on their territory, which isn't a clever placce to build on, especially when you've already met them.

Getting the most out of what you have

Here are some ideas to improve chances to survive in the wild, using the most of your team and resources :

And some ideas in case they finished building their main defenses before the night comes :

Not the answer you're looking for? Browse other questions tagged magic construction .

16
How to minimize the threat of guns in present day magic fantasy
10
How to Escape an Impossible Situation Using Minimal Magic?
19
Are un-populated areas on a continent with countries at least a thousand years old possible?
3
Medieval political hierarchy with an elite 4 counsel elected based on score points - Part 2