Earth is accelerated out of the solar system - do we keep the Moon?

I've been reading about stellar engines. The Wikipedia article on them says this about the acceleration they could provide to a star:

Such thrust and acceleration would be very slight, but such a system could be stable for millennia. Any planetary system attached to the star would be 'dragged' along by its parent star.

I'm writing a sci-fi novel about Earth going rogue. I would like to know if, by the same principles, if the Earth gets accelerated prograde out of the solar system, would the Moon be dragged along? I imagine so since the Earth is two orders of magnitude more massive, being the dominant mass in the Earth-Moon system.

I imagine a set of possibilities:

I don't have the math or the physics in me to figure what would most probably and realistically happen, so I'm coming here for help because you guys always make my day :)

I simulated the Sun-Earth-Moon system to determine the trajectories of Earth and moon. With your given acceleration $a=0.025g$ and $T_{accel}=12\ \text{hours}$, the Earth categorically, and quickly, leaves the moon behind. One parameter we have to play with is the angle of the relative position of the moon, $\phi$, at the time when acceleration begins. It is simplest to see in a diagram.

Earth is orbiting CCW around the sun, and the moon is orbiting CCW around the Earth. If $\phi=0$, then the Earth and moon are moving in the same direction when acceleration begins. If $\phi=\pi$, then the Earth and the moon are moving in opposite directions when acceleration begins. Here is an example trajectory with $\phi=0$, over five years. It's in the reference frame of the sun, which is at the origin of axes:

We see the moon continues to orbit the sun, and is very much left behind. It is interesting to look at the Earth-Moon distance over time. Here is a plot with $\phi=0$: 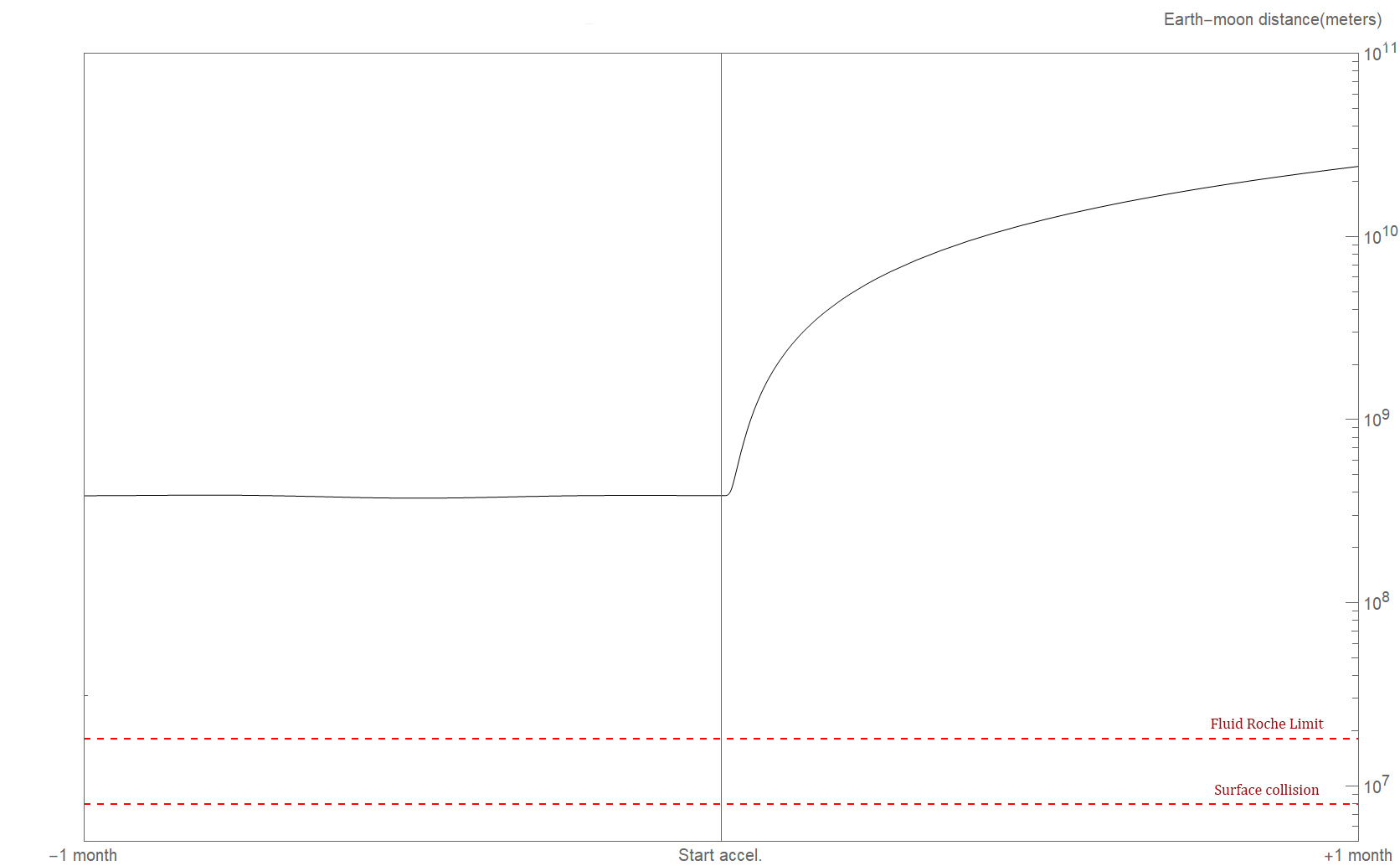 For $0 \leq \phi < 2\pi$, I overlaid the Earth-moon distance plots. Each thin line on the plot below is a distance time graph for a particular $\phi$. 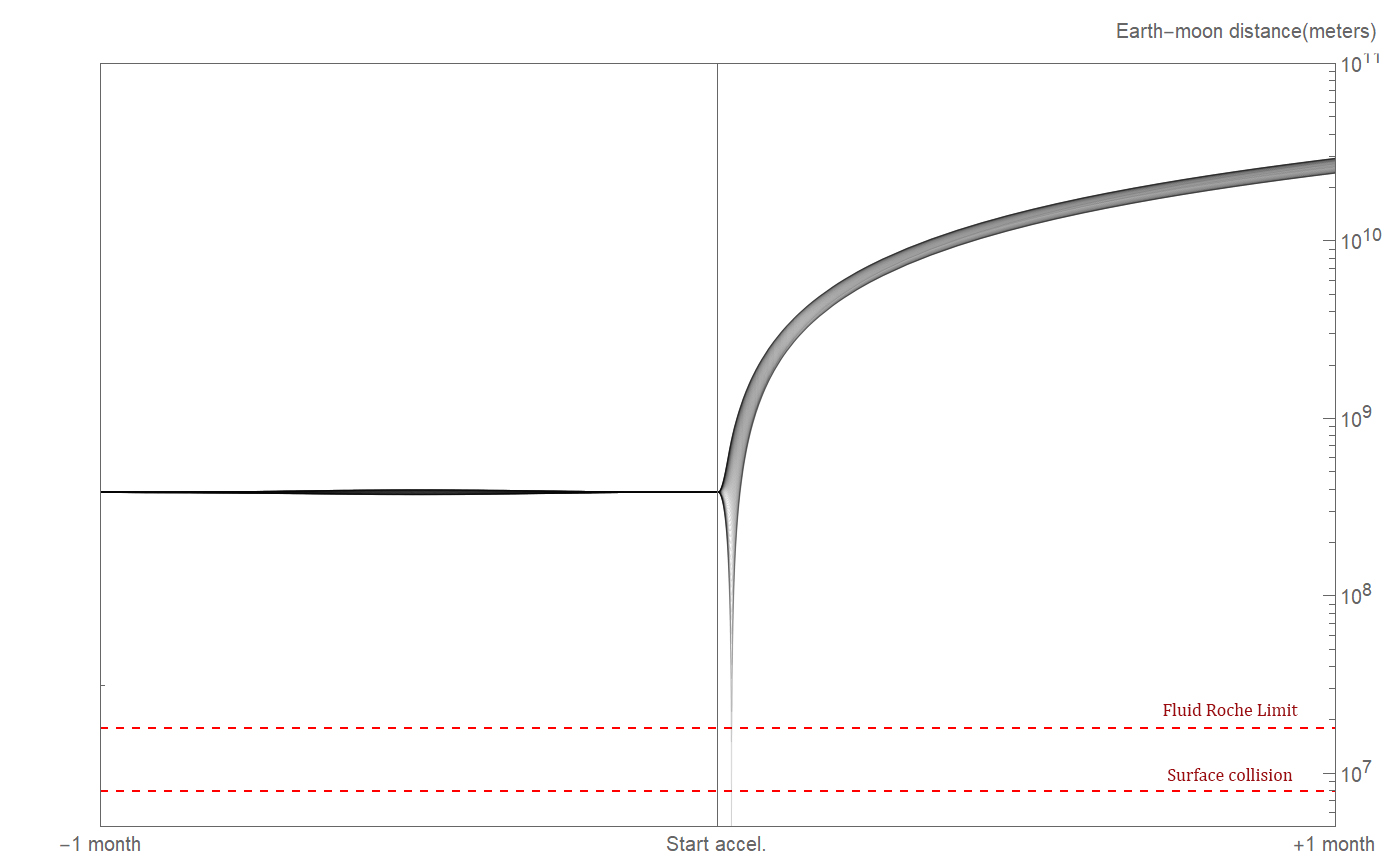 We see that most trajectories (dark lines) have the Earth-moon distance increasing forever. A few lead to close encounters or impacts. After a close encounter, the moon is still lost. The range of $\phi=\frac{\pi}{40}(10 \pm 1)$ lead to approaches below the fluid Roche limit of the moon. Impact/ closest approach happens about 16 hours after the start of acceleration.

From this plot we learn: Independently of the initial configuration ($\phi$), the Earth either leaves the moon behind, or collides with the moon. 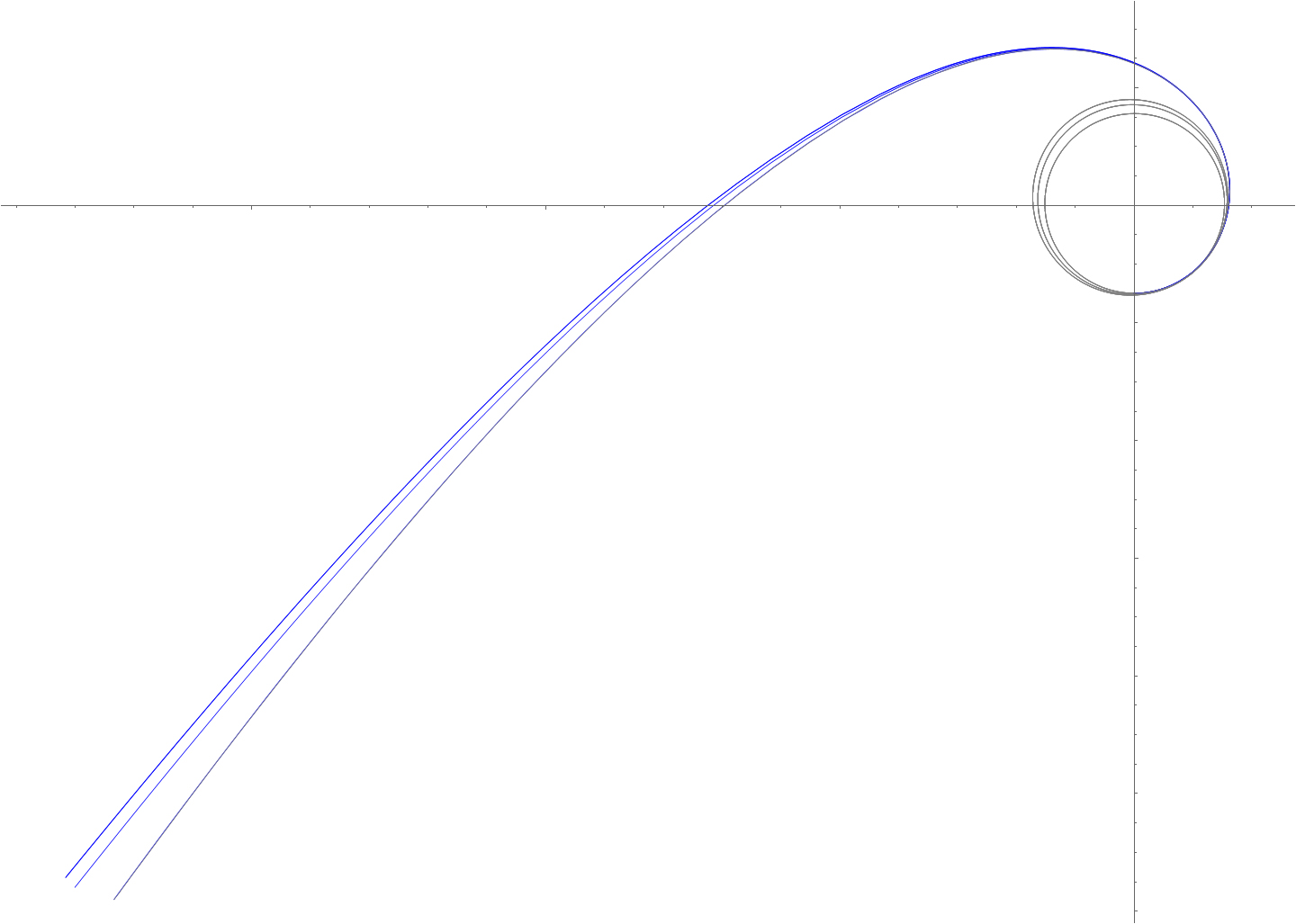 For the trajectory with $\phi \sim 3\pi/2$, here is the Earth-moon distance time graph: 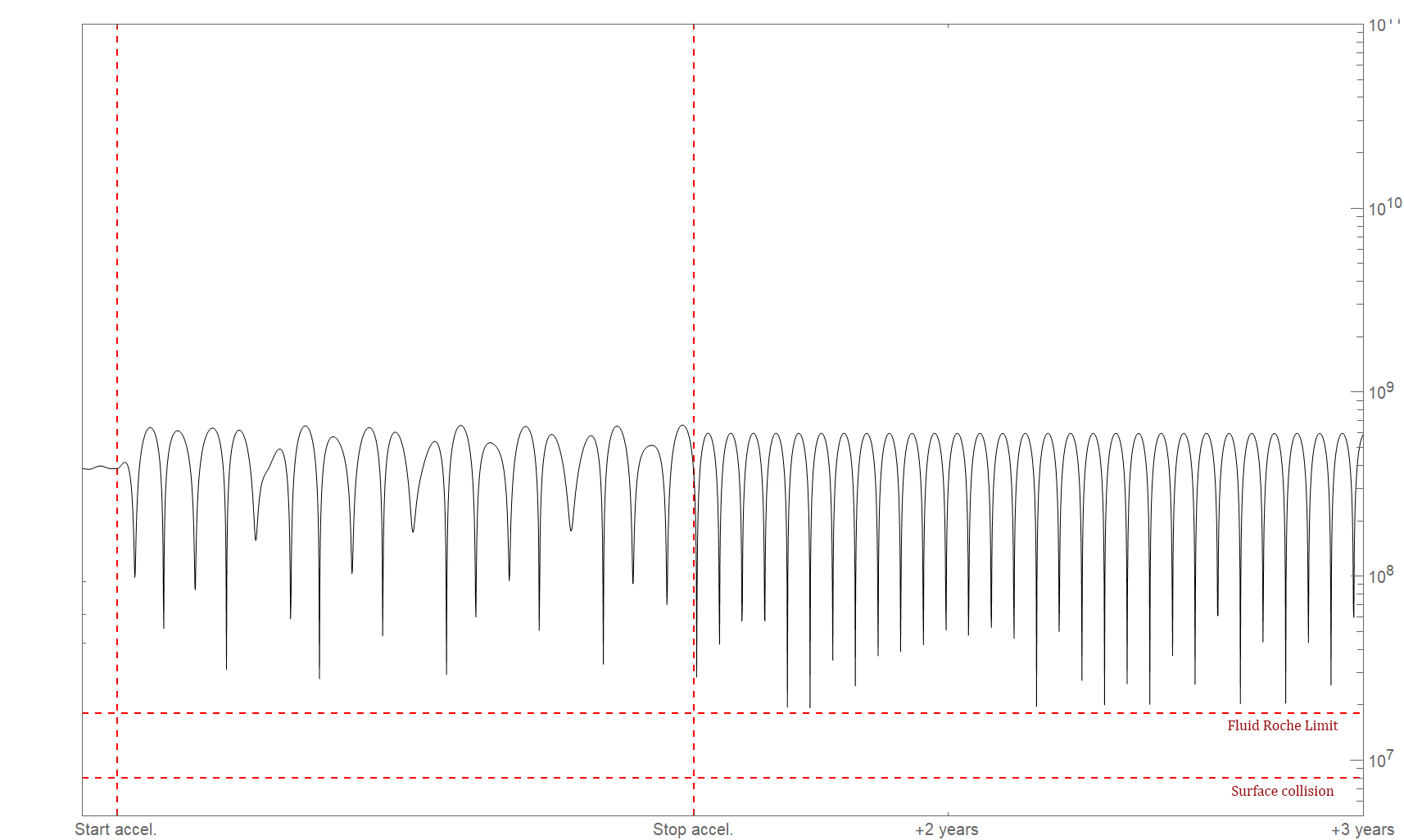 Other values of $\phi$ still lead to the moon being lost. When the moon is retained, the lunar period is reduced to about 20 days, and the lunar orbit is highly eccentric. At perigee, the moon would appear huge, with an angular diameter of about $5^{\circ}$; ten times what we are used to!

From this we learn: the forces and timescales in the question are two or three orders of magnitude away from that required to retain the moon, and even then, the start of the acceleration needs to be at a (somewhat) specific time.

You're going to lose the Moon.

At the Moon's current distance, the Earth's gravity can only change its velocity by $0.002m/s^2$

The mentioned acceleration of about $0.25m/s^2$ dwarfs that, and if at any time during this acceleration, the Moon's relative velocity to Earth exceeds Earth escape velocity for its distance, Earth loses it. At a distance of 384,000 km, Earth Escape velocity is about $1.44 km/s$.

Earth can't drag the Moon hard enough to catch up, and you're planning to put more than 10km/s on the Earth. It's gone.

The moon's centripetal acceleration is always pointed at the earth, and has a value of just 0.0027 m/s^2. If you accelerate the earth in the opposite direction at 0.025g (0.245 m/s^2), the earth will move away from the moon with a net acceleration of 0.242 m/s^2. As the earth moves further away, the force of gravity lessens, resulting in a larger net acceleration, only ever increasing the distance between the earth and the moon. The earth's pull on the moon is not strong enough to overcome the push you're imparting on the earth itself.

This covers the simplest situation of accelerating directly away from the moon. One could also change the direction and timing of acceleration to generate a collision between the earth and the moon, or a close flyby. I suspect you could do some interesting things to slingshot the moon in certain ways, but I don't think it'll be possible to keep the moon in a stable orbit throughout the earth's acceleration.

Depends on direction of thrust and relative position of bodies

Firstly, the Earth-Moon system will definitely be disturbed. The most likely scenario is ejection of the moon, though collision is possible if you happen to... well, accelerate the Earth into the Moon.

You are applying the force to Earth only, which means that you are disturbing the parent-satelite system by adding an external force to one of the bodies only. If you wanted to keep the Moon in current orbit, you'd need to accelerate the system as a whole. Otherwise you are changing the relative velocity of the two bodies. As a simplification that might be easier to imagine - accelerating the Earth by X km/s in a particular direction should effectively be the same as accelerating the Moon by x km/s in the opposite direction - what matters is the relative change in velocity.

As you're accelerating the Earth (by your calculations) to 42km/s that means about 12km/s increase in speed over 12 hours. With a Moon orbital velocity of about 1km/s that change means that Moon's velocity with regards to Earth is anywhere from 13km/s (well over Earth escape velocity) to 11km/s retrograde (Moon's orbit is reversed). EDIT: Correction regarding escape velocities. At the escape velocity of the Moon from its current orbit would be about √2*current orbital velocity. Which will be about 1.44km/s. Hence, the Moon will be ejected.

And of course accelerating directly into the Moon (which will move about 1/60th of its original orbit over the course of Earth's acceleration) will also lead to a collision.

Probably not with your criteria that the force only affects the Earth, for 12 hours, and at 0.025g. Others have explained well why that wouldn't work. We'd leave a lot of satellites behind as well. If the force affected the Earth/moon system, then sure.

If the force only affected the Earth, it would have to be controlled to keep the moon with it. If you have a force capable of accelerating the Earth at 0.025g, you could move it into a position so that the moon is heading straight for it and in the direction you want to go. Start accelerating away so that it isn't close enough to ruin the Earth. If the moon were only 1/3 as far as it is today, you could accelerate Earth at 0.0245g away from the moon, and the moon would be accelerating towards the earth at the same rate. The tidal forces of the Moon on the Earth would be 9 times as strong.

Of course when the acceleration of the Earth stopped, you'd need to do some maneuvering to get the moon back into a stable orbit to keep them moving through space in a happy little system.

There should be a way to do it without losing the Moon, but there would be a very narrow range of timing. If the acceleration is started just right before the Moon is in the part of its orbit away from the sun, the Earth would come towards the Moon. If it just passes the Moon, the distance could be small enough that the gravitational attraction comes close to matching the acceleration.

You can do a rough calculation for the general case by calculating the Moon's kinetic energy with the Earth at rest, and let that be P. The Moon gravitational potential energy in respect to the Earth can also be calculated and let that be U. From the virial theorem stability yields 2P + U = 0 (approx).

You can approximate by ignoring the drag effect of the Earth on the Moon during the Earth acceleration phase (this could be roughly estimated however), and at the end of the acceleration you can get the new Earth-Moon distance and the new Earth speed. That allows you to calculate the new values of P' and U'.

Or you can also apply the equations to calculate the characteristic energy of the Moon after the acceleration, assuming neither distance nor position change during the acceleration (i.e. the Earth is teleported at the acceleration-ending point with the final velocity in zero time).

In both cases you'll find the same result - the Moon is lost.

(This of course assuming the Earth doesn't collide with the Moon)

Answer: No, we loose the moon and all satellites too.

Consider that your moving of the planet will also cause all LEO satellites to enter the atmosphere and burn up in first few hours. ISS is dead too, unless the astronauts take the life-raft down to earth in the first few hours.

The only satellites to survive physically would be in Geostationary or high graveyard orbits, and I suspect they'll be left behind as well, eventually to orbit the sun or maybe the moon in a very wide circle, which itself will have a vector approximately parallel to the solar plane, but its direction depends where the moon was in its orbit as the earth left.

In a perfect world, the moon would end up in orbit of the sun, but its much more likely to be going out or toward the sun.

I think that the answer is that the moons orbit would be changed into a more eccentric orbit, since the gravity of earth will poon on the moon and she will come on our way, but the centrifugal force will make it stay in orbit, although maybe more eliptic. This, of course, is only if the earth were to speed away slowly. If it were to go away faster, the moon would stay behind.

3
Which countries/organizations are most likely to ensure survival on a freezing Earth?
2
Can we live off hydrothermal vents?
1
Visible effects of most satellites deorbiting at once

14
Get/Keep Air on the Moon!
16
What impact is required for a visible (from Earth) ejecta plume on Earth's Moon, and would the Moon survive?
23
Realistic sky of an Earth-like moon orbiting a gas giant (length of day and size of celestial bodies)
5
What would be the impact on Titan, Saturn and the Solar system if aliens harvested as much hydrocarbons as possible from Saturn's moon?
9
If the Earth was part of an ultimate solar system, what would the sky look like?
4
What would happen to the moon if Earth shattered?
3
Detecting an escaping Earth
4
What would happen if a neutron star approached the solar system?