What would the flora of a floating continent be like?

The world consists of a few layers.

With all that said, what would the flora of the skylands be like? Would it be possible for surface flora to pass up to them, or would they have their own type of vegetation? Would the winds just blow everything away instead, leaving them barren landscapes and thus forcing settlers to build contained areas for farming?

Seeds, and quite possibly tiny plantings, can be borne on the wind & also lots of plants spread their seeds through bird droppings, and so ordinary surface plants would likely be found in the skylands as well.

But I would think that native skyland flora would also evolve eventually. I'd hazard the guess that one of the most striking flora types of these environments would be the inverse tree and the rim vine. These aren't species, but rather are types of plant.

Ordinary trees grow upwards and fight against gravity. Inverse trees root themselves in the Edge, the soil matrix surrounding the skyland's perimeter, and use gravity to assist in getting water and nutrients downwards. Such trees can grow hundreds, even a thousand feet tall, though woe to any surface dweller unfortunate enough to be underneath one when it comes falling! It's good wood though, tough & flexible, and carpenters of the ordinary surface prize its beauty and strength.

Rim vines operate along similar principles, rooting themselves into the soil of the Edge and letting their leafy verdure hand over the side. These plants, however, often start out well back from the Edge, allowing them to create strong root networks which can hold the vast weight of the dangling vines & leaves.

Both kinds of plants play host to ecological niches that surface dwellers and skyland folk alike only rarely get to see. There are not only whole species of butterfly & honey bee & squirrel that live well below the Edge, but also whole species of plant life that inhabit the lower canopies of the underforest. 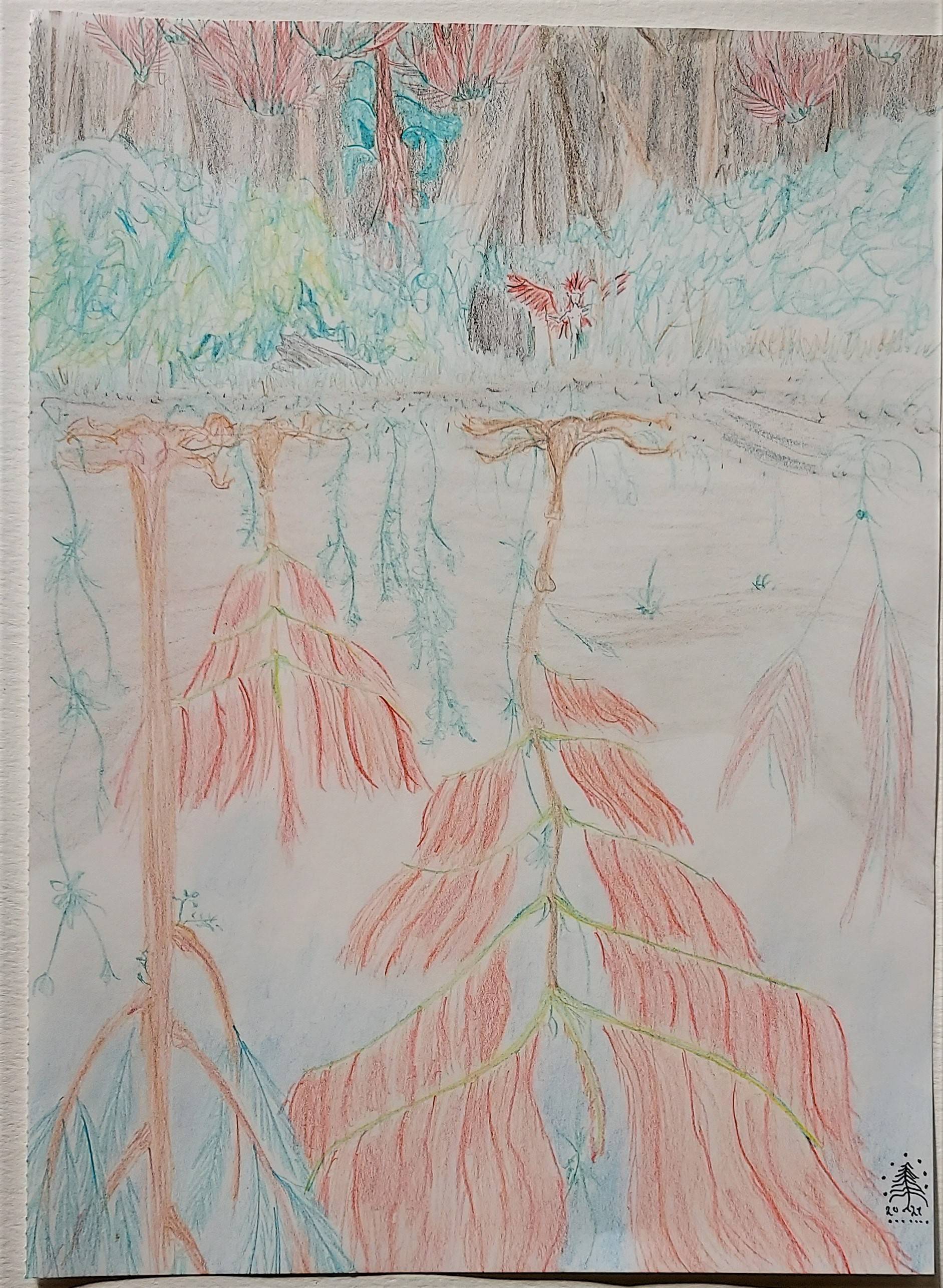 This image is of the northern skyrealm of Yeola. The twin planets Yeola & Camay, each have polar caps, of which this is one, that focus & modulate the thaumo-magneto-gravitic fields of the planetary system. These are called skyrealms by the natural philosophers in apposition to the great landrealms of the surface that make up the continental masses of land. Skyrealms are fairly small in comparison.

As you can see, this portion of the skyrealm is fairly wooded -- a dense forest of quite ordinary trees in the background. Standing at the Edge is a person, a Tana, for scale, who is between five and six feet in height.

Immediately along the Edge, I've depicted several different kinds of vines & trees of the underforest. The red fimbriated yruois trees are quite common, and I figure the larger specimen is about 70 feet tall. Notice the segmented trunk: it is a behaviour of the yruois tree that if it becomes damaged or diseased, it can release the distal segments, allowing them to fall to the world below, and it will begin to grow new segments. The blue-green resueia or feathered fern tree on the left is more conventional in its growth habits. It has a straight trunk and large fernlike leaves that grow from tapered limbs.

Of the vines, the ishia or stellate vine (there's one on the far left, beyond the resueia and also one growing next to the yruois tree) can grow quite long, perhaps as long as two hundred feet. Their habit is to grow long fibrous segments the joints of which sprout leaf poms and runners. Towards the middle is a bunch of lariyaias, a sort of ivylike vine. From the main root stock, various runners with broad leaves descend over the Edge. These vines are fairly short, growing from 15 to 30 feet in length. The luria is a kind of red leafed fern that grows along the Edge. While it has green leaves close to its root stock, it sends down long stalks of red feathery leaves.

Plant life of the underforest almost always has two kinds of leaves: the light gathering, and the water gathering. It's difficult to make out, but below the level of the basal rock, at this part of the Edge, only about forty to sixty feet thick, one can perhaps just imagine a layer of dense foggy mist that eventually resolves into the blue sky below. This foggy layer is a permanent feature of the netherstone, the underside of the skyrealm. If the Denê of the skyrealm were to dig through, they'd find that the breeze is chilly, the fogs deep, swirling and crawling with thaumo-electric charge. The contrariness of the gravities would make them sick, because there's no sure up or down in those parts. Even so, they'd be foolish to jump through the opening! Hardy as they are, even a Tana wouldn't survive the plummet into the depths of the mighty Ocean a mile or more below.

It is from the foggy layer surrounding the netherstone that the taller trees and plants of the underforest get their water. Shorter vines and ordinary plants that nestle among crevices and ledges along the Edge must rely on rainfall, runoff, ground water or else the relatively higher humidity of the air immediately around the Edge itself for their water. And it should be noted that there are hundreds of kindreds of ferns & plants that grow in the underforest: they have no roots except those that attach them to a host tree or rock outcropping; they gather what they need solely from the air.

It should perhaps be noted that not all that is green in the forest is a plant, for indeed there are some animals that thrive along the rocky Edge that look like plants. The "air fern" is one such. It looks just like a fern, but it slowly creeps along the rock face in search of dead insects and decaying matter to feast on. The Denê of skyrealm sometimes keep these as pets.

They would be seeded by the lands they floated over. Therefore, they would probably be a mix of the plants native to those lands, having competed to a new ecological system. You may find Ascension Island an interesting case; though it did not move, the vast majority of the plants on it were introduced by human intention and came from many systems. Unlike that island, however, it would mostly have seeds that could be borne by wind or by birds.

But the flight might have additional elements that affect them. Do their flights mean they go through a wide variety of meteorological system? Then the plants would have to be able to cope with shifting from arid conditions to torrential rainfall, from arctic cold to tropical heat. Are their flights regular so that it operates like seasons, or does the weather pattern change unpredictably? The more extreme, and the more irregular, the fewer plants will be able to adapt to them. They would also diverge from the plants they stemmed from.

Not the answer you're looking for? Browse other questions tagged flora .

9
How would flora behave on a two continent planet?
24
Creating a realistic world map - Vegetation/Biomes
5
Tree volcano? (A "treecano", if you will)
8
What do mushroom-corals use to build their skeletons?
8
If I made a plant that could float between clouds, what would it look like?
5
Why would a tree species grow very large in what is a very windy environment?
5
What would a thicker atmosphere do to plant growth/evolution?
6
Reef World 4 - Flora
3
Could floating trees lead to floating islands?