Would having only 3 fingers/toes on their hands/feet affect a humanoid species negatively? [closed]

Ask Question
Asked 2 months ago
Active 2 months ago
Viewed 899 times
6
$\begingroup$
Closed. This question needs to be more focused. It is not currently accepting answers.

So I have this 3-2 1/2 feet tall humanoid species called Pinokiins that as of the time of typing have 3 fingers(thumb included) and toes on their hands and feet instead of 5. Is this a negative thing? Could they still have as much dexterity as humans? Could they play the same instruments as we do and as good? Could they make detailed drawings and paintings like us? Could they still have the same grip as us? They tend to go on all 4s when they run or travel long distances on foot as they have arms as long as their legs and are hunched over alot, so would having 12 digits in-all instead of 20 make this difficult to do?

Three fingers can produce all the necessary grips the only one that really suffers is the clutch grip, (AKA ball grip, AKA sphere grip, AKA ect. grip), but it still works it is just not as good, and almost half of the other possible hand grips only use three fingers anyway. A lot of the most important tasks (like stone knapping) depend more on the wrist than the fingers. 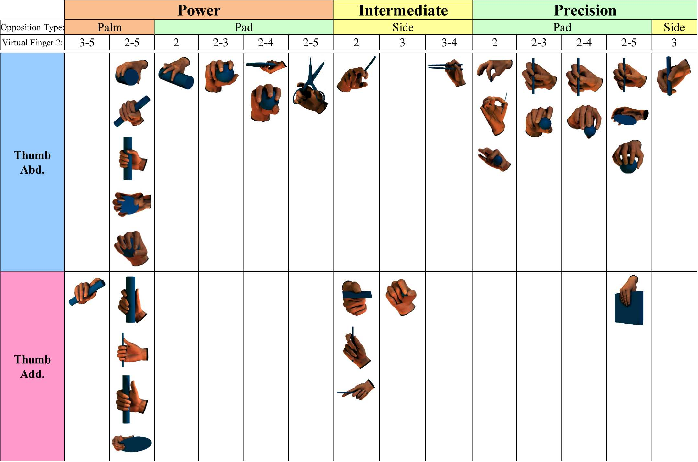 Grip strength depends on the muscles on the arm not the number of fingers, three fingers may actually end up being stronger since you can have thicker finger bones and tendons in the same area.

A hand with three fingers is just about the minimum needed for the tasks humans use our hands for. I was once informed by a historical reenactor that early modern armies mandated that their soldiers have at least three functional digits per hand. (Recruiting standards back then were lower, to say the least.)

Tools, musical instruments, et cetera would need to be designed a bit differently to accommodate a non-human hand structure. Playing a harp, for example, or typing on a keyboard would be harder with fewer fingers.

If these creatures walk on their hands, they likely have a gorilla-like body plan. Knuckle-walking evolved multiple times in Earth's history, as it's the easiest way to have a foot that works both as a load-bearing element and a hand.

Not the answer you're looking for? Browse other questions tagged biology creature-design anatomy humanoid or ask your own question.

31
Are hoofed bipeds feasible?
13
What are the design implications on firearms when they will be used by a race without opposable thumbs?
8
Could a Dinosaur make tools with only three fingers?
10
Hygienic footwear for prehensile feet?
3
Tentacle fingers
3
Could a human sized creature with a skeletal structure similar to a gibbon's be bipedal?
8
Naming the “hand” of a humanoid bird