Warhammer homonculi grow edged weapons out of their own bodies. What should those be made out of?

As I mentioned before, dragons would be too goofy, werewolves are closer to oversized dogs, while lizardfolk are now finally part of the standard fantasy races. These creatures are more cool than terrifying anyway, so, I came up with a briliant idea!

However, I'm usnsure of the materials. Bo staffs and clubs shouldn't be a big deal to produce, but what about swords, halberds, pommels, goedendags, and poleaxes?

It's especially worrying since mass-produced homonculi are supposed to be going up against steel weapons, and while their sthick is Zerg Rush tactics, it's worthless if my homonculi can't even scratch an opponent who's only wearing a measly gambeson.

Is there any biogenic (produced by a living organism) material that could hold an edge when formed into a weapon and resist blows from steel weapons?

While I know that our body does have iron in it, I need a material that is (or its components are), well, more present within the human body.

It will have to be teeth. 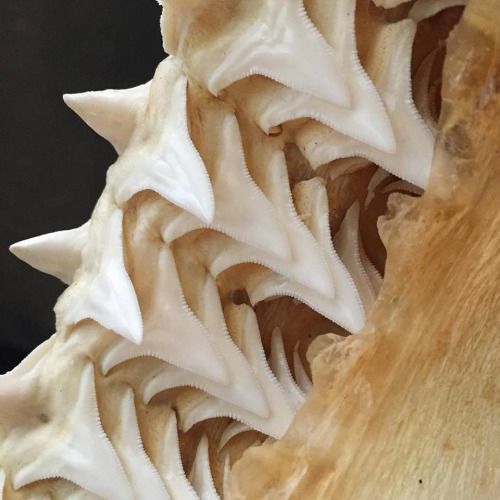 Depicted: the jaw of a bull shark. These teeth hold an edge for long enough. An individual tooth is plenty hard and can resist blows from steel weapons. Until it doesn't and gets knocked loose. It was worn out anyway. A fresh one rolls in to replace it.

Parasitic wasps often have hardened zinc-tipped ovipositors, though that may not scale to the size you need.

A few links to get you started:

Manganese and zinc in the ovipositors and mandibles of hymenopterous insects -- https://academic.oup.com/zoolinnean/article/124/4/387/2684387

Breaking up the Wall: Metal-Enrichment in Ovipositors, but Not in Mandibles, Co-Varies with Substrate Hardness in Gall-Wasps and Their Associates -- https://www.ncbi.nlm.nih.gov/pmc/articles/PMC3722128/

Some sponges can produce silica-based spines to support their bodies. Silicate minerals can have a vicious edge- for example, the Aztecs used swords made by adding obsidian blades to a wooden war club. So, a creature engineered for war could have silicate blades naturally embedded in its skin.

Not the answer you're looking for? Browse other questions tagged science-based weapons materials biochemistry melee or ask your own question.

5
Powerful tail swipe with as little muscle as possible. How?

5
What material should a mjolnir type weapon be made out of?
16
What would justify the use of serrated blades in edged weapons?
39
What would justify hunting dragons that are made with real physics, with melee weapons?
6
What could cause trees to grow large, hollow bulges about halfway up their trunks?
5
Autonomous homonculi vs mass-produced homonculi, which one would be more restricted by the Geneva Convention?
2
My "Fairy Weave" is a transparent/translucent material with high tensile strength and elasticity. What should it be made out of exactly?