In This Picture, How Far Can One Binary Orbit the Other? 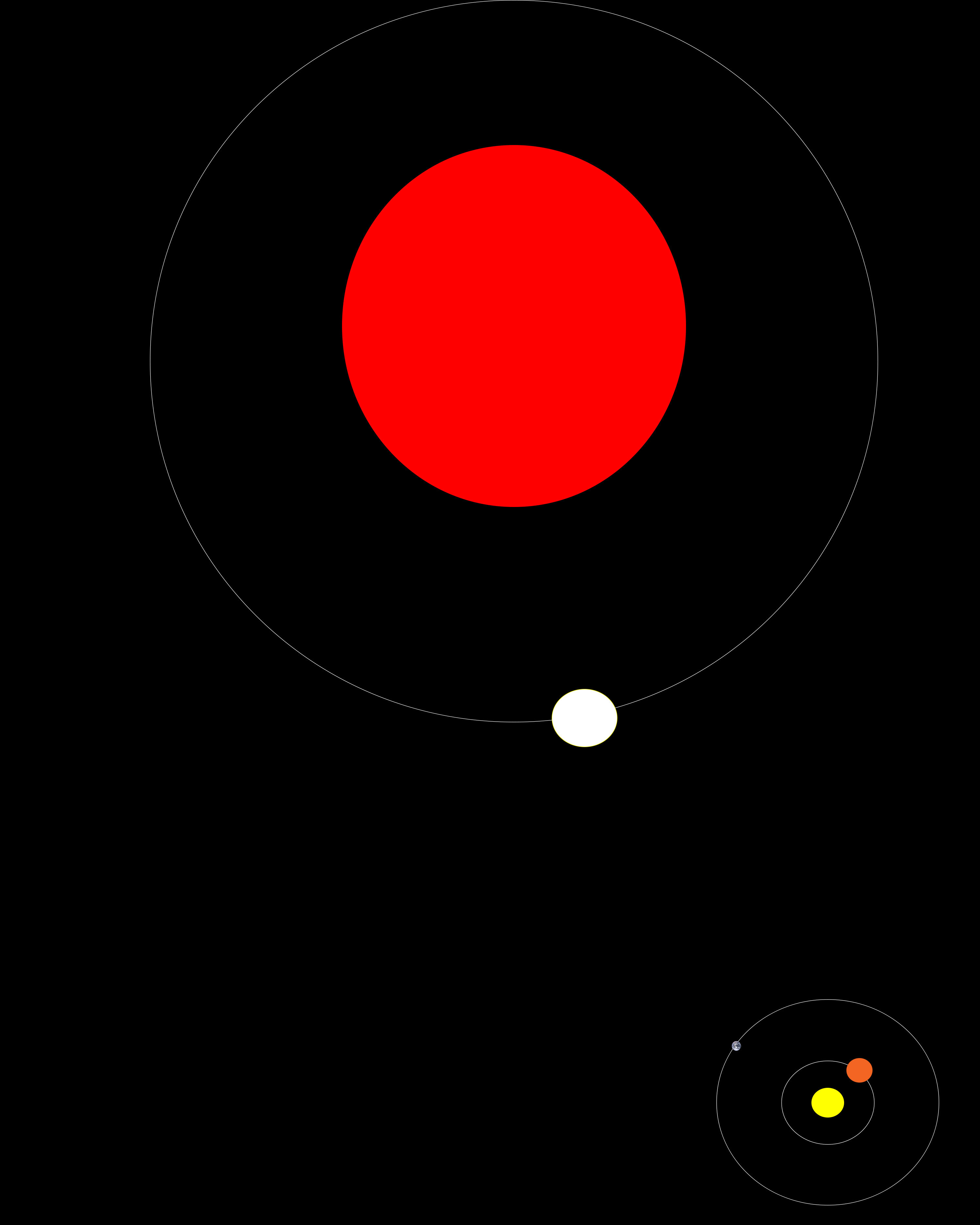 In an alternate Milky Way in an alternate universe, there is a cluster of stars so dense that nights are over 60 times brighter than our full moon. In that cluster is a solar system presented (albeit simplified) above. It is actually two separate binaries.

It is in the second binary that this alternate Earth orbits. With an axial tilt of only three degrees, the seasons are defined by how many suns are in the sky. "Summers" are when all four of them are present in the sky, making daylight as bright as Venus and nights 1,000 times brighter than back home. "Winters" are when only the two that it orbits can be seen, when daylight is as bright as our Earth and nights are more than 60 times brighter than back home.

An Earth like that sounds like good news for potential photosynthesizers, but there are problems with the parent binary. A red giant is big, obviously, which means that it had the potential to go supernova before long. And yellow-white dwarves can carry seven times more ultraviolet radiation than our sun. Put those two together, and you would have an alternate Earth that would have to orbit a secondary binary that orbits the primary binary from a safe enough distance.

So the question is--how far can the alternate Earth's binary orbit the primary binary without concern of near-future supernova or UV overdose?

Since you ask about avoiding future supernova risks, let me reuse my answer to this question. The question was about the safe distance from a supernova for a Dyson sphere, but since the estimate I do is about the energy amount I think it can be applied also here:

Mandatory What if quote:

Rule of thumb for estimating supernova-related numbers: However big you think supernovae are, they're bigger than that.

Here's a question to give you a sense of scale:

Which of the following would be brighter, in terms of the amount of energy delivered to your retina:

Applying the physicist rule of thumb suggests that the supernova is brighter. And indeed, it is ... by nine orders of magnitude.

I am pretty sure the supernova, with the sheer amount of photons blowing out in its surroundings while exploding, would simply plasmify the Dyson sphere, way before the radiation could have any chance of pushing it apart.

What do we learn from this? Well, supernova are huge, that should be clear by now, and as you see 2.2 millions AU are probably too far to be still gravitationally bound as you describe.

If you want your system safe only from UV overdose instead, just use the square law reduction, and assume that a safe UV dose is what we receive from the Sun here on Earth (since in normal conditions our planet can cope with it)

If the star emits 100 times the Sun EUV dose, the planet has to be 10 times more distant to get the same amount Earth does.

Your 3 star system could be a "wide binary" - actually a trinary as you propose.

Now Dr. Bo Reipurth of the Institute for Astronomy, University of Hawaii at Manoa, USA, and Dr. Seppo Mikkola of Tuorla Observatory, University of Turku, Finland, have used computer simulations to come up with a mechanism that accounts for the formation of wide binaries. Most stars are initially formed in small compact multiple systems with two, three or even more stars at the center of a cloud core. When more than two stars are together in a small space, they gravitationally pull on each other in a chaotic dance, where the lightest body is often kicked out to the outskirts of the core for long periods of time before falling back into the fray.

Meanwhile, the remaining stars feed on the gas at the center of the cloud core and grow heftier. Eventually, the runt of the litter gets such a large kick that it may be completely ejected. But in some cases, the kick is not strong enough for the third body to fully escape, and so it is sent out into a very wide orbit.

The implication is that the widest binaries really should be three stars, not just two stars.

Wide binaries can be as far apart as 200,000 AU. But things get hairy. Other things in the neighborhood can perturb the orbit of the distant star, which here is the one with the life-supporting planet.

While tight binaries (for our purposes, mean stellar separations below ~103 AU) are unaffected by perturbations from their local galactic environment, this is not true for very wide binaries (a > ~103 AU). Torques from the Milky Way's tide and impulses from other passing field stars continually change the periastron of very wide binary orbits... This evolution often causes binaries to undergo brief phases of very low periastron, forcing close passages between companion stars. Recently it was shown that the low-q excursions of very wide binary star systems can regularly trigger the disruption of planetary systems orbiting the member stars...

And you specify that their neighborhood is crowded with other stars. These passersby will whisper seductively to your distant partner and it will miss a step in its dance around the 2 in the middle. In this neighborhood a menage-et-trois might not last too long.

I know your OP asked about being far enough to be safe in case the central star went supernova. @L.Dutch's comments about A-bombs on the eyeballs says it all. The widest binaries are 200,000 astronomical units or about 3 light years. To be safe from a supernova you need a distance of 50-100 light years.

Not the answer you're looking for? Browse other questions tagged science-based orbital-mechanics stars alternate-earth light .

4
What Would the Climate Be Like on this Extreme Alternate Earth?
10
A Habitable Zone Within a Habitable Zone--Would that Make any Difference?
0
Would Sean Raymond's "Ultimate Solar System" Work in This Particular System?
5
Would the seasons on this solar system be too extreme for Earth life to thrive?
4
What is the Roche Limit of a White Dwarf Compact Star?
0
In this binary, how far would the secondary planet orbit the primary planet and still have its own day-night spin?
0
How bright would these four stars look on the planet you're standing on right now?