Evolution of sexual parasitism in a species with small and intelligent females but large and “brute” males?

So, I had this idea about a sapient alien specie paritally based on the reproduction of the schistosoma 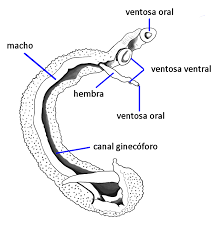 A flat worm specie in which the male is notorious bigger than the female, and this have a curvated chanel in which takes the female for give her protection, this causes a constant copulation while are together, they bond themselves by the presence of a suction cup. Females can go out from this chanel and find other males, but the males compete for evite this.

Then I had the idea of an alien specie in which the female have a little size with a notorious inteligence, maybe sapient, compared with the male which would be some times bigger than the female and with less intelligence. The reproduction of this specie consist in the selection of a male by the female, the most capable and useful for her life plan The males for some time live separately from the females but when they reach sexual maturity they look for them and congregate in groups where they exhibit their abilities and the females choose them to later bond them together (In this part it will not be decided if it is a perpetual union such as monkfish or a temporary union from which the female can detach herself and look for another male, but this will depend on the following questions).

With that union the females have practically acquired a tank or living "mecha" that they control with their own mind obviously with separate functions to the mind of the male so as not to complicate things. This would give a much more capable union for both female and male who benefit from having great strength and intelligence which otherwise they would not have because during their development they could only invest energetically in one or the other.

Probably this evolved because males were aggresive since their birth and they were losing that aggressiveness as they created and despite how hostile it seemed, only other young but somewhat older males would be responsible for coupling them in their herd or perhaps the same females would ensure that they did not starve by restricting them like an animal wild; The point is that they would miss out on the intensive care that females would receive with what they would acquire the necessary knowledge to live in society.

The characteristic of growing to giants and bonding the females, it could evolve from an extreme need for protection against predators, especially against the offspring and the females themselves, the same reason why male offspring are also so aggressive, to protect themselves from driving away predators by protecting their own litter this made the males invest all their resources in strength, size and perhaps other defenses (horns, armor, fangs), further enhanced by sexual selection on the part of the females, meanwhile the females had to keep caring for the others therefore they learned to make tools over time and no longer depended so much on males, but still it was a great use to stay attached to a male who could give more use to certain tools.

I have thought about shapes, anatomies and body format for make it viable but but I'm still indecisive about certain things that I don't know how they will work, based on different earth animals, gorillas, elephants, humanoids, crabs, beetles but I could not decide.

So, my principal problems are the next (but if you see other at myinitial idea do not hesitate to let me know and make your own proposal):

Finally, how is this possible?

It's common in animals use use the same opening for copulation and birth, but it's not necessary. The reasons it's common is because it's evolutionarily simpler to reuse an existing mechanism or body part than to create a new one from scratch, and because growing and maintaining more body parts requires more energy. This doesn't mean it's impossible to have separate openings for different functions, simply that it's less likely to happen without some evolutionary pressure.

Anyway, I have some answers to you questions, inspired by the sexual behaviors two real-life animal: bedbugs and anglerfish. Beware of slightly gory details.

This is a trait that actually evolved in a bunch of invertebrate species, but it's very prominent in bedbugs. The idea is, instead of taking the time to carefully line your genitals up with your mate you just evolve a spine at the tip of the penis and stab the female just about anywhere and insert your sperm. The sperm kind of float around until they find the ovaries and impregnate.

There are several associated byproducts of this. One is that males often inseminate other males as well, hoping it will end up in the testicles where it will then be passed on to another female - so called "penis fencing". Another is that female bedbugs have evolved a special organ to reduce the effect of traumatic insemination. It's not clear exactly how it works, but current theory is that it helps reduce infection.

Anglerfish and the fusing of bodies

Anglerfish live deep in the ocean, and the population down there is really sparse which means an anglerfish might only encounter another of its species a few times in its life, and it's unlikely that this will match up with when they are ready to lay their eggs. Their strategy to deal with this is that the male is much smaller than the female, and looks quite different. When they encounter each other the male bites the female on her side, and them slowly he becomes a sperm-producing parasite. Through the bite location, their circulatory systems fuse and many of his organs dissolve. The rest of his existence is now centered on one thing: when the female is ready and releases her eggs, he sends out his sperm to fertilize them. That's it.

Combined on a macro scale

It's clearly possible to attach to another creature and join you circulatory systems together, and there is no reason the joining spot couldn't be centered on a penis stab instead of a bite. On a bigger and more complex animal you cant really count on sperm travelling trough the body to where it needs to go, so just make sure the penis stabs directly into the uterus. So timing of sperm insertion is up to the male. The female might release eggs regularly on on command, depending on who you want to be in control of reproduction.

While joining onto a bloodstream is simple if you can overcome the immune response since it's modular, taking direct control of a nervous system is harder since it's all directly connected to a brain already. That said, you don't really need full control but just ways to send signals. This could be sounds or limbs tapping out commands, but cooler would be simple nerve connections the male can detect but which don't directly control movement. The female can send out general signals, such as "go there" or "fight him" or "give this child your food" very fast, and the male is trained to respond to these because the females intelligence gives better outcomes. Maybe more complex signals for precise tool manipulation are also possible, but take longer and so are hard to use in emergency situations.

It would also be interesting in that the male are always actually in control of themselves and can ignore the female if they wish - they just don't usually. Great for dramatic storytelling: you could outmaneuver another pair by making the male overcome with some emotion so he stops listening to commands, and then he's simpler to trick than the female.

Not the answer you're looking for? Browse other questions tagged science-based reality-check biology creature-design reproduction or ask your own question.

34
Evolution of species with separate sapient and non-sapient forms?
7
Will this creature's reproductive strategy work?
2
Reasons and advantages to this form of sexual dimorphism
7
Why would males exist in species with hermaphrodites?
10
Is there a reason for a humanoid species to be 'biologically' matriarchal with females being slightly more dominant than the males?
5
Could a species that practices maternal dermatophagy develop sapience?
13
Can humanity survive if all people are born females and later become males?