What would be the best city in the U.S./Canada to live in for a supernatural being trying to exist undetected from humanity?

I am wondering if there are any specific cities on the North American continent (not considering Mexico for the moment being, for reasons detailed below) that supernatural beings trying to live hidden amongst humanity would naturally flock to in order to hide.

Additional parameters for my question are as follows:

Worldbuilding SE already has this question (Best country for humans with superpowers to hide?), but there are some significant differences. I am interested in figuring out which specific cities would be the best place to hide, rather than countries. The other question is more talking about 50,000 superhumans migrating as a group (and therefore dealing with immigration laws) and talks about countries rather than specific cities. However, different regions of a single country can be dramatically different in terms of hideability. For example, in North America, hiding in Calgary or Denver would be a completely different experience than hiding in Toronto or New York City.

The main reason I'm asking this is that in urban fantasy series with supernatural beings there is often a single city that ends up being a hotbed of supernatural activity for plot-related reasons. New York City is especially popular for this purpose, but I’ve seen Seattle, Washington, Toronto, Vancouver, Chicago, Denver, Los Angeles, San Francisco, Boston, Tulsa, and even Cincinnati used. However, usually the city is picked first rather than picked considering what would make it a supernatural hotbed. What I’m wondering is if there are specific geographic, demographic, and socio-economic factors that would make supernatural beings under a Masquerade more likely to emigrate there and hence more likely to be hotspot cities for supernatural activity than others. I would be very interested in seeing if there are cities that could fill the role in other parts of the world like Europe, Australia, Japan, etc. (e.g., would Tokyo be better than Kyoto? Would Liverpool be better than London? Would Melbourne be better than Sydney? Would Perm be better than Saint Petersburg? Not to mention what would be the best areas in Mexico specifically), but I fear that would be too similar to the previously asked question so I am focusing on North America north of the Rio Grande given that most of these series tend to be set there. Trying to focus on the U.S. and Canada over Mexico given that Mexico seems like too much of an obvious answer.

You want a city with low visibility from authorities and where the odd crime can go unnoticed. I think the best metric for this is the effectiveness of law enforcement. You want an ineffective police force who will leave you alone. Washington Post did an analysis of where police are least effective at investigating crimes based on how many murders go unsolved.

Let me just show the cover art from the Washington Post story (A four-block area around Gladstone Avenue, on the northeast side of Indianapolis): 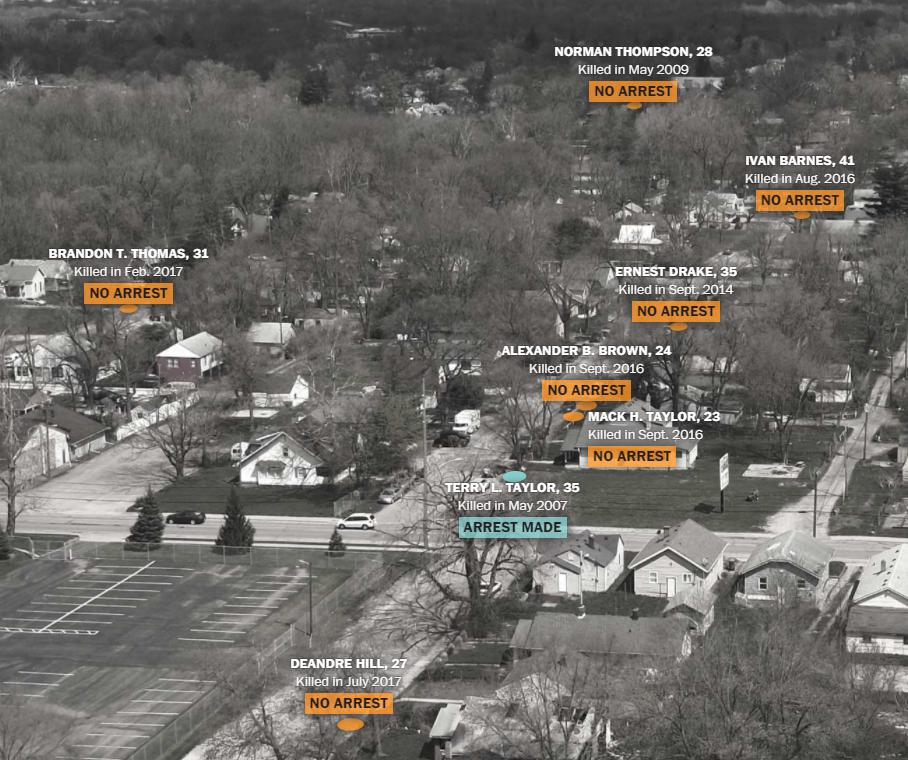 (There probably already is a werewolf here - that'd explain all the unsolved homicides!)

The average income of US\$ 42k a year per person (down from the average of \$53k), might scare you off, but looking online at the upper end of real estate nearby there are some really nice mansions for the well-off supernatural to relax in.

There are already cultures and beings living there that I would not classify as "Human", and they are an accepted part of the community.

Anecdote: I drove through there one Sunday afternoon a couple years ago. Walking on the sidewalk, I saw a couple:

Obviously just a loving couple out for an afternoon stroll, shopping and minding their own business.

Now... When NORMAL humanity presents such an facade, just how are we supposed to notice if one of them is a Werewolf, Vampire, or Orion Slave Girl?

P.S. Portland got a very close second place in my vote, due to the existence of people like this:

The supernatural beings aren’t interested in living in a non-urban area. It would be a lot easier for them if the supernatural beings if they were willing to live off in the woods as a hermit. However, the supernaturals in this case still want access to electricity, running water, and fresh coffee. So at most they would be willing to live in a suburban area that has easy access to an urban center. A city that has large amounts of wild spaces in close proximity to urban areas might be a favorable factor for them.

I suggest Yellowknife, in Canada.

Yellowknife (/ˈjɛloʊnaɪf/; Dogrib: Sǫǫ̀mbak’è[8]) is the capital, only city, and largest community in the Northwest Territories, Canada. It is on the northern shore of Great Slave Lake, about 400 km (250 mi) south of the Arctic Circle, on the west side of Yellowknife Bay near the outlet of the Yellowknife River.

The closest city to it is Edmonton, about 990 km away.

Here is a picture of the place to show that it is quite urban: 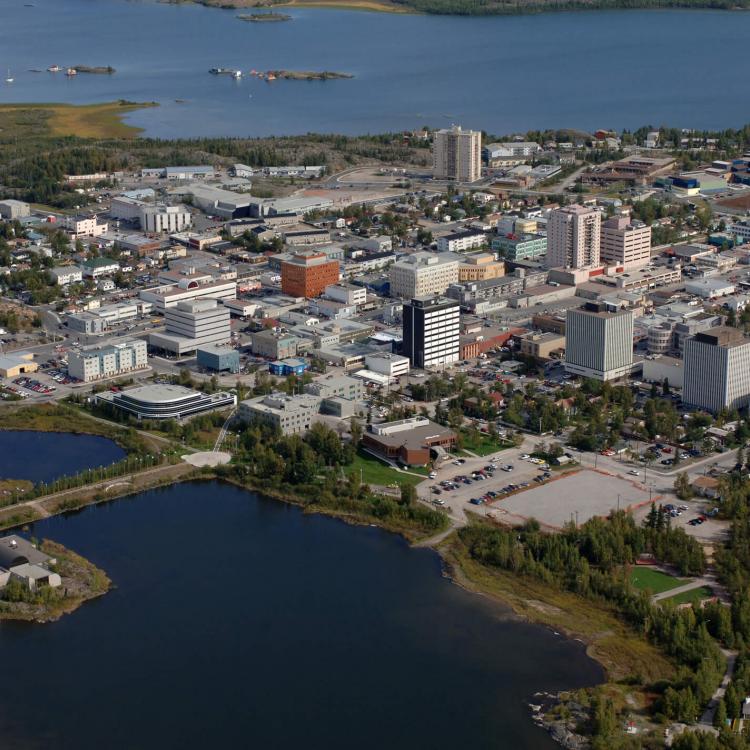 It is large enough that you can get all the benefits of modern technology in it. But it is quite small with a population of about nineteen thousand people (which is almost half of the population of the province), and as I said above quite far from the next urban center. There is plenty of rural and wild areas around if the supernatural being wishes to do something away from human eyes, while still being able to quickly go back home in a urban place.

High population densities are your friend. Smaller towns tend to have a higher rate of "everyone knowing everyone", so any kind of secretive weirdness is going to be much harder to hide.

For an entity that feeds on humans (vampire, wendigo, etc.), a city with a high temporary/transient population (the homeless, tourists, migrant workers) is ideal. When someone without social or legal ties to the place goes missing, it'll take longer for anyone to notice that something's wrong.

Lots of vacancy, including larger factory building. You could easily remodel some of those to accomodate the supernaturals' needs.

Part of this is going to depend on your supernatural beings.

Do they all have the capacity to pass for human at least enough to hide? If not, then at least some of them will need to be basically hermits. Hermits in a nice house, but hermits all the same.

What do they consider a nice place to live? A nice place is not necessarily a giant mansion or a top floor penthouse in the big city. Some might want a country house where they have room to be themselves without prying eyes on them all the time.

How much Urban is enough of it? Smaller cities are still urban centres, and they will still have many of the amenities of larger centres, but they will not have everything. It is a bit of a sliding scale.

This is the general answer. As you have realized in your own question, different entities will have their own needs and wants.

My thought would be a city of 40,000 to 100,000 people -- Large enough to have most of the urban amenities available, even if actual options are limited. However, there will also be enough semi-rural areas available to have finer homes or larger yards to run around in. Also, enough people so that one can live in relative anonymity if desired.

Also, it is plausible that some supernatural beings actually would consider a farmhouse and surrounding farm to be a nice house. A nice place, an honest days work away from the prying eyes of people sound great. Yes, you have neighbours but so long as you can pass for normal for that time, you're fine for the most part. Surprise visits could be tricky but manageable.

I haven't been around the continent too much so I don't know every city there, but I was thinking of a place like Chatham or Barrie, in Ontario to go by the range of settlement sizes. It would not be a perfect fit, but those were my inspirations and places that I know of. They are a good size, have a good mix of nice houses in the city, rural space nearby to use, and proximity to larger centres for the rest of their amenities.

But this is a general case. I would assume that vampires, at least as we generally know them, probably want a larger city to have a wider net to cast for anonymous (and possibly willing) food. Werewolves might veer towards cities with woodlands or bush not too far away depending on their control. Aquatic entities are likely as concerned about the waters they need over if their house is really nice -- a place on a river or lake is likely their ideal and not all cities will qualify there.

This part will be the trickiest and depend on the powers and control your supernatural entities have more than the location chosen. People will eventually notice that there are bodies in a certain neighbourhood killed in a certain way (if they ever find the bodies that is).

As an example, a vampire will have to figure out how to deal with a bloodless body in the event they drain somebody dry. The cause of death will be very noticeable -- two pricks in the neck or at a vein as well as a distinct lack of blood.

Those that actually bodily consume their prey have it a bit easier -- there will be a disappearance, but without a body it will be hard to prove that they died. Their death will only be assumed until something confirms it.

Not the answer you're looking for? Browse other questions tagged society urban-fantasy secret-society cities modern .

2
Best country for humans with superpowers to hide?

13
Would it be possible for a city floating on water to exist?
3
How to "hide" the effects of battle between supernaturals
3
Will A Real City On Earth Ever Have 100 Million People?
6
How large could a population of supernatural beings be and still be plausibly hidden?
12
Is it realistic for a town to completely disappear overnight without a major crisis and massive cultural/historical impacts?
3
What Point of Departure Would I Need to Turn The World's Largest Cities Into Kowloons?
3
Suburban areas for megacities?