I need an armor which can stop being pierced by arrows and bolts, stops blunt trauma from maces and swords and also stops stabs and cuts.

But how would a living armor work and not get killed from the first arrow? Consider it's something which evolved and was not created with magic.

Many animals use other animals as armors, but they are using the dead part of that animal. Except some fish which hide into the anus of sea cucumbers, but those cucumbers are kind of squishy.

Your armor is a hard fungus. 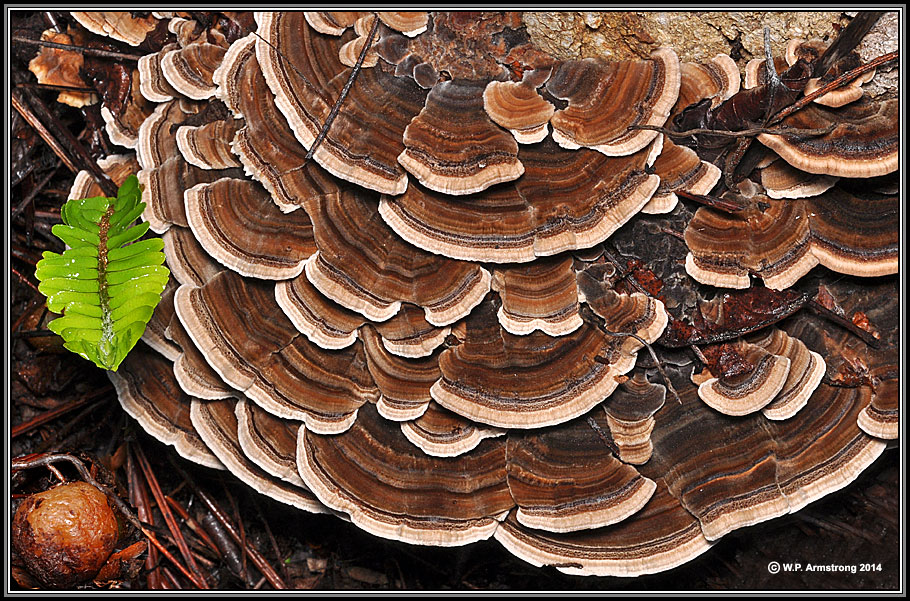 Go ahead and whack it with a mace. I hope that made you feel better. Try to cut it. You will need a saw, and time. This fungus produces fruiting bodies as hard as wood. You cannot kill the fungus by whaling away at the fruiting bodies, but you will get a good workout.

Fungus is alive, but its "body" is composed of ramifying filaments and adhoc appendages as depicted here. With concerted effort you could ablate the woody fruiting bodies in a given area. When you stop, they will begin growing back.

How you tend and feed your living fungal armor is a different question.

Absent magic, a full bodysuit single organism is unlikely. It's simply too far from the original creature to the end result without the needed benefit in between.

Imagine an original species similar to army ants, that essentially build their hive by linking their bodies together. They could develop over time, where some of them would grow a thicker carapace and become a defense against outside threats.

Along comes humans (or other sapient) and figure out how to create the pheromones necessary to trick the ants into thinking the humans body is the hive and needs protection. They'll now crawl over you and link together to create a layer of armor.

From here they can be developed like any other domesticated animal, to be stronger, more armored, and even simple first aid (some native tribes today actually use army ants as a sort of suture to close wounds. The pincers bite down on the wound closing it up, and even when the body is removed, the pincers still hold together)

Side note: Stabs are what arrows and bolts do. There cannot be an armour who would stop everything. There will always BE something better (IRL, in created world it can be the best thing in the world).

What stop stabs and cuts? Armour. Turtles have one of the best. Any stab that would penetrate it is actually a blunt force that brake the shell. To mitigate this we have pangolins. Small pieces that are shaped to deflect and disperse the force applied.

To mitigate the blunt force there should be some non-newtonian fluid underneath it. Some type of colloidal fluid would be good. Like milk. Or secretion from some spiders

Also having a lots of bones instead of few ones would help in being flexible (making the force of any hit to be divided on many joints and small pieces).

I need an armor which can stop being pierced by arrows and bolts, stops blunt trauma from maces and swords and also stops stabs and cuts

It sounds like you are describing a turtle, or animals with very thick skin/fur.

For example hunting elephants required the development of dedicated ammo, because a normal bullet would have not enough penetrating power to reliably do its job. Same goes for boars, which are known to be not an easy target.

Basically if the animal has enough material to dissipate the energy of the blow before it reaches a vital organ, that thickness can act has an armor.

Of course this last until better weapons are developed. It has already happened with tanks, too.

You may take some inspiration from Star Wars Legends and the armor worn by Darth Bane. The wearer becomes a host to parasitic creatures that latch onto the skin and feed off the bloodstream, but whose shells provide almost an almost impenetrable defense. Over time, these creatures multiply until they cover the entire body.

Take Willk's excellent answer of a type of fungus and add another creature to it like social spiders (1) which could work together to create protective webbing between the blades of the fungus, adding some distance and cusioning to blows and adding a lot of protection against piercing and slashing.

Since we are basically designing our own creatures to form living armor we can start combining traits and alter some parameters.

Instead of spiders, we design a community of spidersilk-weaving ants using a high-strength spidersilk like that of the barkspider which is currently the toughest biological material created (2). Such ants can have castes, some of which could have other purposes like gathering food for the fungus, making repairs, performing soldier functions like biting or even using stingers and the like. So that when a weapon strikes some of them might be able to climb the weapon and inconvenience the weapon wielder and more things like that. Food gathering ants could be equipped with wings so that they can feed the symbiotic creature when its worn while following the distinct smell and feremones of this hive-like creature.

While we are at it we could add some kind of limited form of limpet creature who is fed by the ants and fungus and generates teeth that are incorporated into the fungal structure. These teeth are incredibly hard and are some of the hardest biological material possible. (3)

This way you have essentially created a composite armor, incorporating the fungus for volume and form, the limpet teeth for added hardness and the webs for extra structural strength in case the fungus is split as well as toughness. On top of that the armor can feed itself if you place it on the ground for a while as the ants gather food for all organisms and any attacks made against the armor could result in ants being able to counter-attack. The only reason I'm not adding things like those flesh-disolving murder-wasps is that its too hard too aim them while it is possible to designate area's on the armor where soldiers congregate with less risk to the user or friendlies accidentally aggrevating them (who will definitely be using something similar).

Conversely, some whales may use barnacles as weapons or protective armor to add power to a strike in mating battles or against killer whales (Orcinus orca), or as a deterrent to being bitten by killer whales. This would make the relationship between whale barnacles and certain whales mutualistic in which both parties benefit. It may be that some baleen whales, in the context of the fight-or-flight response, are adapted for a fight response, namely the humpback and gray (Eschricthius robustus) whales. As such they may have evolved to attract barnacles, sacrificing speed for damage and defense. Others, the Balaenoptera, are adapted for a flight response, probably evolving an antifouling mechanism in their skin to deter infestations, avoiding unnecessary weight which would hinder speed. However, the bowhead whale (Balaena mysticetus), the North Atlantic (Eubalaena glacialis), and North Pacific (E. japonica) right whales, which favor fight responses, are generally barnacle-free.[21] It may be that a reduction in population caused by historic whaling restricted their distribution and contact with other whales, thus impeding the barnacles' ability to infect other whales.

Something like coral comes to mind. But you may decide it's more supple or more durable than actual coral, and it doesn't need to be as porous as coral. It could "filter feed" on something in the air, or perhaps it derives energy from human body heat. You can think of other symbiotic relationships between the human wearer and the armor too. Perhaps this "coral-like" armor benefits from burnishing and polishing for some reason. Maybe the armor eventually binds to the human skeleton itself, if worn long enough, and then it can take nutrients directly from the body.

The issue I see that stops an animal from being entirely clad a material that we typically associate with armour (i.e. iron, copper, tin, zinc) is that these materials are not very abundant in the environment and we tend to have to mine immense amounts of ore to extract a relatively small amount of that material.

Hence why you see animals with shells made of calcium or silica, and the animals themselves are largely made of hydrogen, carbon, and oxygen which are abundant elements. So your living armour would need to be fed somehow fed the large amounts of raw material and energy necessary to grow itself. Perhaps this could most feasibly done with an initial incubation (placental) state which removes certain physical limitations so that rapid feeding and growth (and dissipation of the waste heat) can be achieved. But feeding and repairing in the field would likely be much slower.

But being a living organisms that grow itself and can form complex molecules amd build things from the bottom up (humans tend to build things from the top down), it could probably produce something much more elegant than the crude hunks of solid iron and copper that we tend to use, intertwining the scarce elements only where necessary with hydrogen and carbon to make a more natural, biologically growable (can't exactly use a smelter or forge), and resilient material. This would also greatly reduce the amount of the relatively scarce elements required.

62
What kind of natural armor would stop bullets?