What sort of work environment would require both an electronic engineer and an anthropologist?

In a futuristic setting, I have two characters, an electrical/electronic engineer and an anthropologist, and I would like them to meet as coworkers. In what sort of environment would those two professions be likely to work together?

Another possibility would be a collaborative project, for example a xeno-archaeological investigation of some ancient electronic technology made by aliens whose culture is difficult to decipher.

I'm looking for a context that makes sense. Am I missing something obvious? I may be suffering from tunnel vision a bit here.

UPDATE: I love all of these answers, but in the end I had to pick one that fit most. Thank you all.

Anthropology and archaeology have been augmented in recent years by nondestructive noninvasive imaging techniques. One of the coolest is backscatter muography. 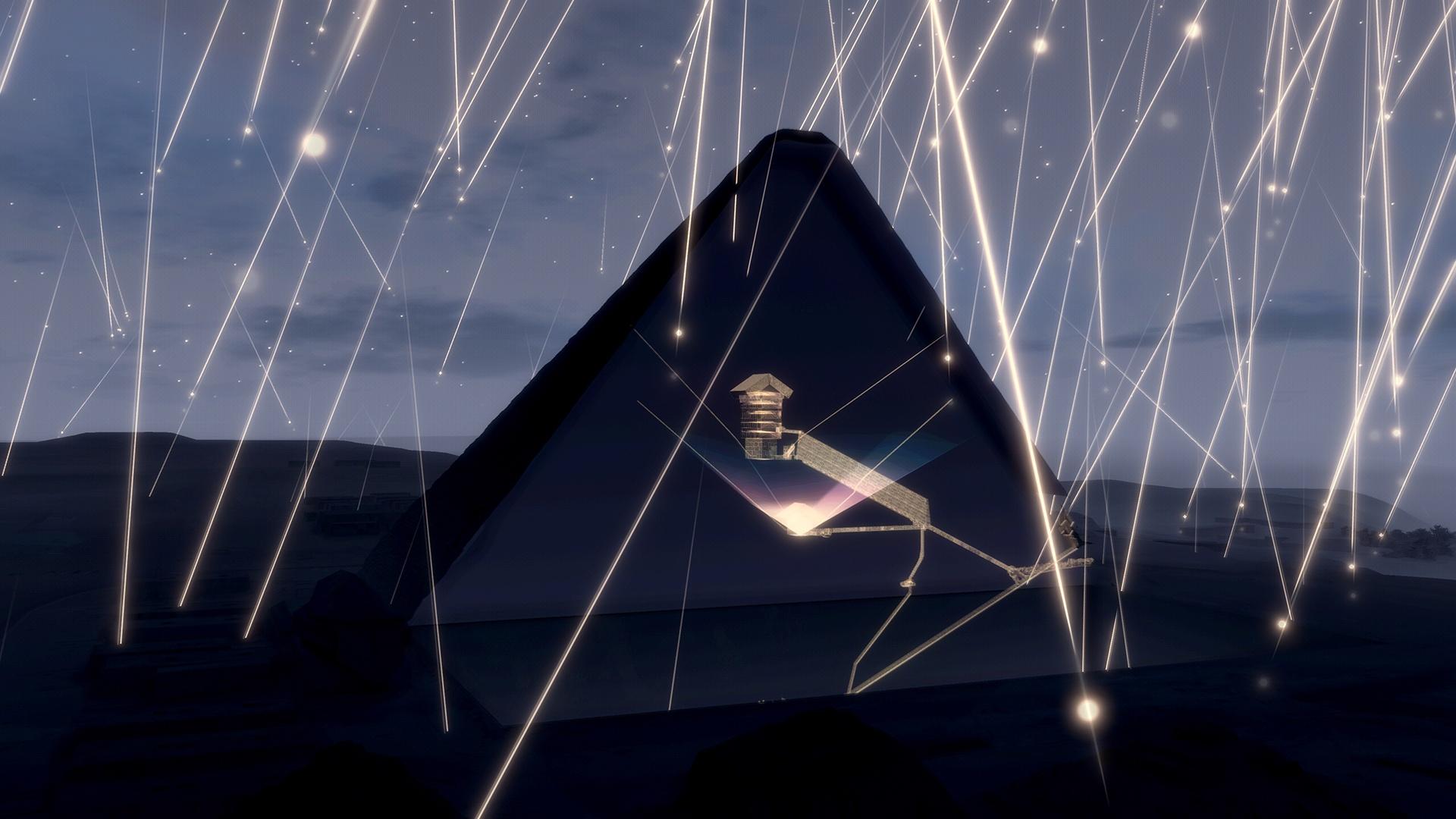 Scientists used an unprecedented imaging technique called muography to create an internal scan of the Great Pyramid of Giza. See how it works. Muography is the process of recording the trajectories of sub-atomic particles known as muons to form images. The process is similar to taking an x-ray but on a much larger scale.

Muography usually takes advantage of natural muons formed in the atmosphere - so a sort of passive sensing technique. It would be possible to generate artifical muons and use them to do active sensing; this would be good for a near future fiction.

Another less edgy but also cool technique is ground penetrating radar. This is active sensing, using electromagnetic radiation to look through and into structures and the ground to determine what is under there.

Coolest of the cool: aerial lidar 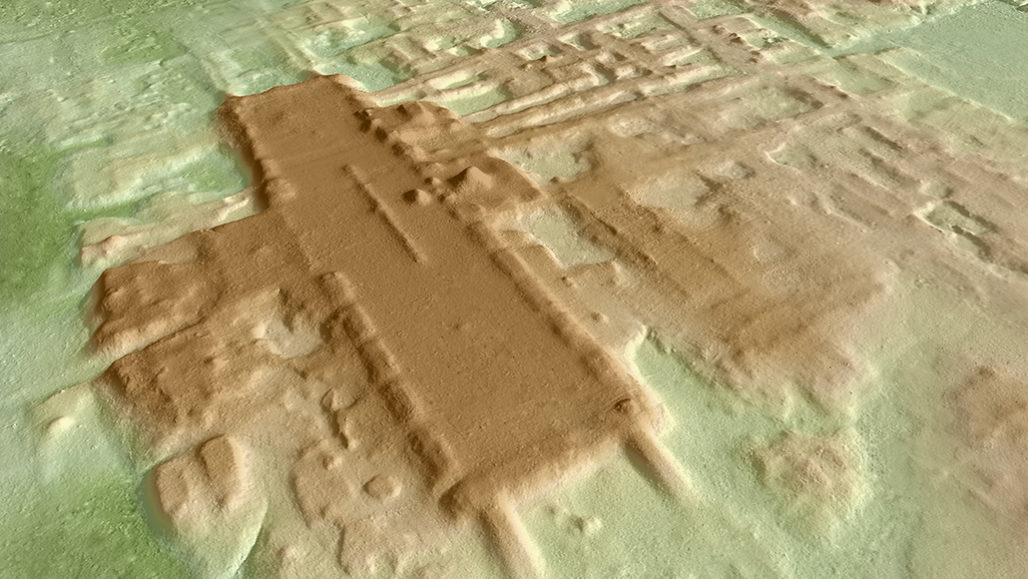 What’s more, the study is yet another example of how an airborne remote-sensing technique called light detection and ranging, or lidar, is dramatically changing how archaeological research is done in heavily forested regions. The technique, which uses laser pulses to gather data on the contours of jungle- and vegetation-covered land, has uncovered other lost ruins at the Maya city of Tikal in Guatemala (SN: 9/27/18) and a vast network connecting ancient cities of Southeast Asia’s Khmer Empire (SN: 6/17/16), among other finds.

I like this one best because you can look thru things to see what is underneath, then go down and walk in. That is what is going on with these Mayan ruins. People did not appreciate the extent of what that ancient civilization had built!

Your anthropologist knows where to look and what to look for. The engineer knows how to look. They are a good team.

I had a vision of the engineer whose nickname is Din. Originally it was "Odin" because he was All Seeing. People started calling him DinDin because he does not like to miss meals and it shows. Ultimately it became Din. Din is good with all of that; "It's all true."

From Wikipedia. Note the "present", it can be used to add understanding of an unusual culture, but still in the present day.

I can see a modern government offering assistance with electrification to some isolated community, and the anthropologist is sent along to avoid cultural faux pas caused by the engineer in the society they know nothing about.

Or electrical work in a native peoples area

It doesn't even need to be foreign - it could be a native peoples but for all intents and purposes to your city-dwelling electrical engineer might as well be another country. For example, last years bushfires destroyed enough of Australia's electrical network to leave 80,000 homes without power for weeks, by destroying long lines snaking out deep into the Australian Bush (Its so intense it turned out to be cheaper to just build new small powerplants in many cases rather than rebuild grid connections).

There are significant aboriginal peoples lands in central Australia larger than many countries - for example the APY peoples lands are larger than Portugal and the US state of Georgia - and there's about 500 "nations" of people, each with their own language, customs, beliefs, government systems, etc.

If you're sending an electrical engineer into these land divisions, including an anthropologist who understands the local culture and belief seems like a safe choice to help avoid conflict.

Am I missing something obvious?

I guess you have a somehow wrong impression of the work environment. Although Worldbuilding is ruled by XKCD, let me introduce you to Dilbert.

Contrary to common believe, not all mathematicians or physicists end up working in blue lighted fancy laboratories and not all humanities graduate end up teaching to snotty kids in some remote school.

Former FCA CEO Sergio Marchionne had a master in philosophy, just to give you an example from the real world.

I am sure he had a lot of engineers, including electronic engineers, as colleagues, if with colleague we mean someone on the same payroll.

Also in your case it can happen something similar.

It can also happen that they work together because it's required by that particular job: I, for example, am an engineer, and I have happened to work shoulder to shoulder with archaeologists because they needed to check that where I was supervising the digging of trenches to lay a conducting cable there were no tombs or other historically relevant manufacts (spoiler: there were a lot of them).

As L. Dutch pointed out, many people don't quite work in the field they studied. But assuming you want them both soon after graduation, doing what they graduated in ...

Essentially, the type of work done at the Computer History Museum when they are working on restoring vintage computers to working condition or trying to reconstruct old technology. The actual process consists of a complex combination of classic investigation to find original documentation as well as some of the type of ‘reconstructive’ extrapolation popularized as ‘what anthropologists do’ by certain dramas on television, together with a lot of applied electrical engineering.

The same type of multi-disciplinary work almost certainly also happens to some extent in state-level investigations from time to time as well.

For that matter, in the distant future I could easily see this being a major aspect of ‘conventional’ archaeology, as a large percentage of what our modern society is leaving behind is of a more digital nature than traditional archaeologists today deal with.

There are some great answers already, so this is really more a supplement. All my answers envision a future with either "primitive" aliens or culturally backwards humans (depending on the background of your universe) being introduced to new tech. which works best depends on the flavor you are going for in your setting.

They work together at a hospital where multiple species come for treatment.

An anthropologist is need to understand various cultures and religions, and quickly, so that treatments don't violate the patients' unique beliefs. Which could lead to lawsuits or war, depending on the culture. And for the other side, for an anthropologist this is a great way to gain access to the variety of species and civilizations.

An electronics engineer could serve in one or more of multiple roles. They could be a doctor for cyber-sentient or cybernetic entities. They could adapt various machinery for patients with different requirements (both biological and societal). They could be there to scan and reverse engineer the tech of any new species that shows up. And they could just repair the existing equipment, some of which is advanced and rare enough to require a doctorate to work on.

For a specific example, you could have an alien arrive who needs to be scanned. But they insist on not being exposed to any technology that uses gold. The engineer races to replace gold based circuitry with copper based equivalents. And the anthropologist talks to the aliens, and learns that while this is a religious requirement, it is based in a biological one. The species is highly allergic to gold dust and while the chances a given machine will expose them to it are small, the risk and its avoidance had evolved into part of their religion. So the two end up working together on this case.

Assuming that you want both characters to actually practice their professions (which is rather unusual in the modern world, where most university graduates work like general-purpose knowledge workers), the most common environment to require both an electronist and an anthropologist would be user interface design / user testing of some new appliance. (That is, if the anthropologist chose to study human interfaces.)

Investigating an ancient and now (presumed!) dead civilization that uploaded their minds to an unimaginably large and complicated computing device of some kind, and thus "transcended".

(Kicker: Civilization isn't dead at all! Device is still operating, at a very slow rate consuming little power, but just active enough to notice the interference of the meddling anthropologist and the unfortunately doomed EE. And, boy, are they ticked off! EE should have been more careful where he stuck his probes ...)

Humanity has discovered a planet that was once completely overtaken by sapient robots, but is now long extinct. All organic life was replaced with machines. Robots here had a culture and history all of their own. An electrical engineer and anthropologist would need to work together pretty closely to learn things about the robot culture, the species that created the first robots, and all that kind of stuff.

Not the answer you're looking for? Browse other questions tagged reality-check engineering anthropology or ask your own question.

10
How could “groundhogging” work, and what explanation would require the least handwaving?
2
What kind of characteristics do flora and fauna need to thrive in a polar environment?
2
What effects would an atmosphere with the following composition and pressure have on humans? on the environment? what color would the sky be?
1
Would combining thermoelectric cells and electronic warfare reduce chances of a ship being detected?
6
Reality Check: What sort of jaws would a venomous and omnivorous creature have to carry a human in its mouth?
6
What sort bridle would be needed to ride a multi-headed carnivorous mount?
7
Would carbon fiber be a good choice to strengthen human bones, and how would that work?
12
What environment would goblins be best adapted for?