How far would we have to travel to make all of our familiar constellations unrecognisable?

How far would we have to travel to make all of our familiar constellations unrecognisable? (in terms of human recognition)**

We know that groupings of stars in constellations is illusory. Two apparently close stars may be vastly distant from one another but appear to be close because they look that way in the sky.

Suppose travellers pop out of FTL into an unknown space (perhaps because of a fault in the onboard AI). How far from Sol would they have to be in order to no longer to recognise any of the constellations?

No doubt a sufficiently developed AI in our ship could orient us in relation to a suitable 3D star map but what if we were out of range of the maps? More to the point, since the AI has proved faulty, what can we recognise as humans?

How far must we be away from Earth in order to recognise none of the familiar constellations?

I am aware that an exact answer may be difficult but I don't think the question is subjective. For example, if we found ourselves in orbit about Alnitak (which Earth dwellers say is in Orion's belt), we clearly would not see Orion's belt in our sky. However it is still possible that some other constellations would look the same at that distance. It's easy to come up with some distance because we could theoretically be in a different galaxy. However I'm looking for a rough closest distance where none of our familiar constellations would be recognisable. How can that be calculated?

The constellations to be considered as recognisable by humans (using a telescope if necessary) is in the following list.

Below is the list of all the 88 modern constellations recognized by the International Astronomical Union https://www.constellation-guide.com/constellation-list/

Last summer, for another answer on Worldbuilding, I wrote a script in an attempt to show how the positions of stars in the sky would change from the perspective of an observer outside the Solar System, using data from three catalogs: the Hipparcos, Yale Bright Star and Gliese databases. (The site which generated the CSV file I used is currently down, unfortunately.) As an example, I showed what the well-known constellation Orion looks like here on Earth and what it would look like if I traveled 10 (33 light-years) parsecs in the direction of $\alpha=0$ and $\delta=0$, where $\alpha$ is right ascension and $\delta$ is declination.

(I strongly suspect I made some numerical errors with the precise locations of the stars in the sky, but it seems that relative to one another, they're fairly accurate - and relative position is what's important here. The axes' scales are a bit off, so ignore the precise values for now.)

Here's Orion as it looks from Earth: 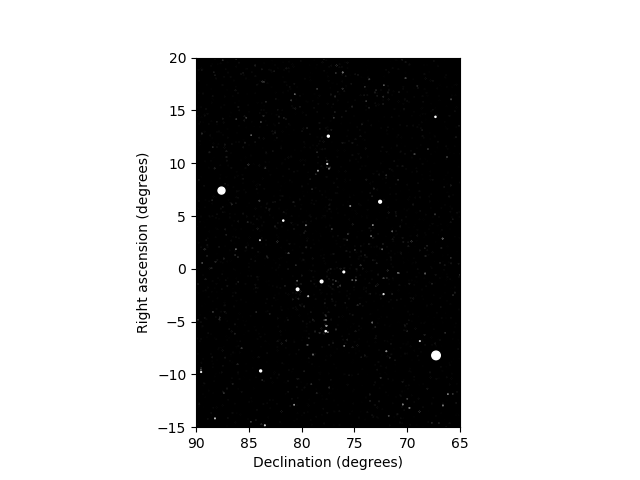 Here's Orion as it looks from 10 parsecs away, in the specified direction: 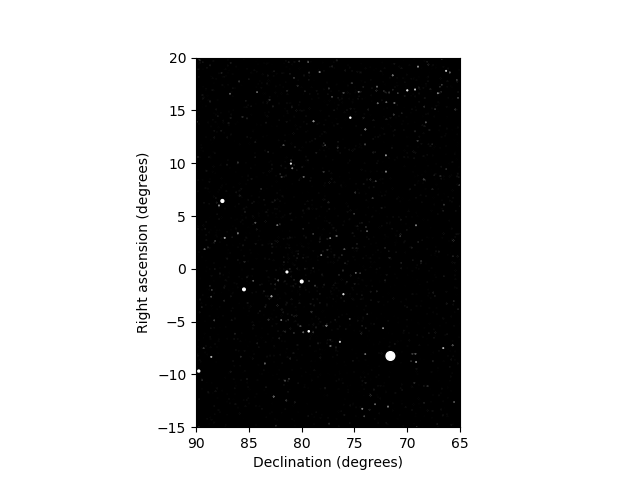 The constellation as a whole seems to have shifted slightly, but some stars in particular have moved more than others relative to the new constellation. For example, on Orion's belt the middle star, Alnilam, has moved away from its companions because it's further away. Mintaka and Alnitak, being closedrto Earth, have shifted more and therefore remain together. Bellatrix, too, has moved significantly because it lies only 250 light-years from Earth, much closer than any of the other stars - now it appears to be where Orion's other shoulder was, whereas that star, Betelgeuse, is off the screen.

It makes sense that we'd seen changes in Orion. 10 parsecs is a few percent of the distance to some of these stars (around at least 4% for some), and given the variations in how far away they are, that does make a difference. Added to that is the fact that Orion is close to 90 degrees in the sky away from the direction we're traveling - had we moved in the direction of Orion, I'd guess there would be less distortion.

To maybe quantify this a bit: Say we have a star a distance $d$ away, and we move $x$ distance in a direction perpendicular to it. For $x\ll d$, we see that it should appear to shift by an angle $$\Delta\theta\approx\frac{x}{d}$$ Therefore, the angular shift of a star twice as far away than another will be half the shift of the closer star. Therefore, we'd expect Bellatrix to move five times more than Alnilam, which is roughly five times as far away.

Now let's say we're moving directly towards or away from the constellation. If the stars were all the same distance $d$ away and were separated by no more than a spatial distance $D$, the constellation would appear to have an angular size $$\alpha\approx\frac{D}{d}$$ At our new distance, $d+x$, the constellation would have a new angular size $$\alpha'\approx\frac{D}{d+x}$$ If the stars are at different distances, then their angular distances from the axis of travel will change individually by the above formula, with closer stars moving more and farther stars moving less.

Hdes answer is very thorough and essentially correct, and I am not going to duplicate their mathematics, but the flaw in their answer is the corner case of moving directly away from a constellation.

Taking the southern cross as an example, the closest star is 88 light years. If I moved 88 light years away from it, the crosses angular size would halve, and it would slightly distort (as it's not a uniform plane),it would still be recognisable as a cross, just it would be half the angular size and have lost about three quarter of its brightness.

The human mind would still pick it as a cross.

The solution? Pick your new position carefully so that a star you've past is added to the constellation, giving it new meaning. The far side of proxima centuri is the closest place this will occur. About 4.5 light years away. The one surviving constellation will have proxima centuri added to it.

It is lucky for space travelers that they have much easier ways to find their posiitons in space than by recognizing constellations. So if you want to reduce your fictional characters to recognizing constellations, you will have to disable those superior methods, perhaps by having the ship's AI control them and thus the AI's malfunction will interfere with the automatic use of those position finders.

If the ship's navaigational AI is on the fritze, the crew would be lucky to have a hard copy book like Interstellar Navigation for Dummies or How to find Earth if Your Ship's AI is Defective, especially if it has lots of tables and diagrams and they don't have to relyon their memories.

There are a number of answers to various questions about interstellar navigation.

Sugests a four step method to find one's way back to Earth if one is lost in space less than about one hundred million light years from Earth. That is a very vast distance, though only a tiny fraction of hte diameter of the observable universe.

Other questions with answers about interstellar navigation include:

I note that when it comes to recognizing constellations, one of the most recognizable from Earth is Orion. The bright stars in Orion happen to be in about the opposite direction from the galactic core as seen from Earth. So if someone is lost in space and trying to find constellations, the first thing they might do is look in the difection opposite the galactic center to see if they can recognize Orion. If they can recognzie Orion they will know that they are close to Earth. And undoubtably someone more familiar with astronomy could point out the asterism or constellation which would be recognizable fromt eh greatest distance.

68
How would an astronaut conclude he's on Earth, but 600 million years in the future?
37
How to get directions in deep space?
15
How can I know where to point my spaceship?
9
How can I locate myself in a random point of space?
19
Can my spaceship figure out its position using Cepheid Variables?
8
How to figure out that you traveled 570 million years into the future while in space on a small shuttle craft?

6
A Binary Sun, A Hot Jupiter and a Binary Mars...All Within View of Earth
8
How would a civilization similar to earth develop if there were no stars at night?
8
About how many planets are plausible for this binary-star system?
9
How can I locate myself in a random point of space?
11
The North Star in the ancient world sky
3
How Big Can the Habitable Zone Be in a G-Type Binary System?
5
Dropping into a new star system: how would you set up a frame of navigational references for use at planetary distances?
4
In This Picture, How Far Can One Binary Orbit the Other?
3
Navigation in space
8
Time scale and mechanism to “realistically” remove Sol from the Milky Way