I am looking for any way to make a very localized snow fall event in the same way hail could be a very local event (and I believe summer showers could be very local too). There should be a village with a lot of snow (say 1.5m of snow), while nearby villages have comparably little snow (say 30cm) falling in a few days. Both difference and amount of snow should be as large as realistically possible in the most favorable event that can happen.

There are no significant differences between all those villages, including geography (no mountains nearby, one village in hills unlike the others or similar). Grassland and woods, somewhere in medieval Europe as far as climate goes. Separation between the villages is about 5km and villages without snow are all around the snowed-in one. All villages should have generally similar weather until this event.

This weather could be influenced by human activity (eg burning anything in any village, throwing something in the clouds at the snow village, or church bells to disperse clouds at other villages; but not intentionally sending rockets with chemicals at other villages). That human activity needs to be possible, preferably plausible, 1200-ish activity.

The most realistic way I came up with little snow is very simple: there was a little temperature difference, but I am looking for alternatives where those nearby villages don't get a lot of rain either.

To recap: A lot of snow on point X,Y. Not much snow or rain on points (X,Y)+-5 km. Same-ish geography of those points. If 5km distance is too small for this to happen, please note what would be the minimum possible distance.

Two gentle fronts, one warm and one cool meet as equals. Together they have a snow baby. 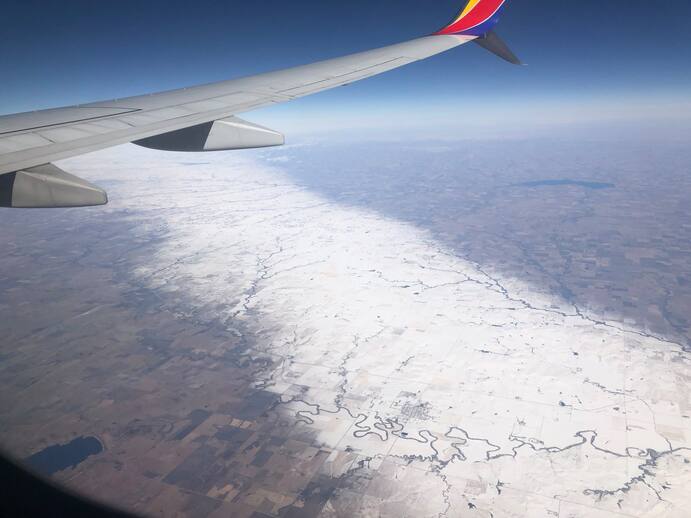 Weather satellites confirmed the bizarre feature, which highlights the meteorological caprice that can give rise to such narrow swaths of snow. More than a foot of snow fell in the band, which was only 10 to 15 miles wide at times. Just a few miles on either side, there were hardly flurries...

Integral to its formation was convergence, or the gentle collision of two air masses at the surface. The “pileup” of air causes it to rise, in turn blossoming into a band of heavy snow showers. That can also cut back on precipitation outside the band, since air exiting the clouds is likely to sink and choke off any snowfall on either side of the axis of best convergence.

I like this one for you because you don't need anything except chance. This was not lake effect - it was in Kansas. It had not happened before. I have to think what Dutch observed and described in his answer must have been something like this.

What you want is lake-effect snow. Areas downwind of large lakes can have very heavy snow, while nearby areas that don’t share the same topography have much less.

What you are asking it's plausible enough, just based on personal experience.

So I grew up in Maryland where predicting snow was interesting. In this state 80% of the population lives 40 minutes or less from the boarder with another state by car and we do have days where a part of the state it is snowing and another part is covered. When predicting school closures as the kid, I would generally look at which portion of the state was 28 degrees or colder vs. 28-32 degrees (F). The reason is the state used a salt that was effective until 28 degrees. If the roads were above this, the snow would melt on contact and it would be a non-issue.

We also have the telltale I-95 Rain/Snow Line, which is an interesting trend that the parcipitation West of I-95 would be snow and East would be Rain/ Wintery-Mix (A combo of Rain, Ice, Snow.). And while it was never precise, the more north and west you went the better chances the snow had to sticking while the more east and south, the less chance it had.

The other thing you should consider is having the rainy village be in a coastal region while the snowy one is further inland. Water is an interesting chemicle and has a very High Specific Heat. What this means is that once water is chilled to freezing temperature, it may still stay in liquid form... you have to add a little more energy to it to actually get it to turn to ice. Water can get well below the freezing point and if static enough, will still be liquid until it's disturbed and immediately turn to a slushy ice. In this state, the water is said to be "Super-Chilled". What this means for environments is that a large body of water will actually affect the local temperature differently than the nearby inland temps. Typically, coastal areas are cooler than inland in the summer, but warmer in the winter because of this effect.

Again this is sene in Maryland, where the Easter Shore region (the part east of the Chesepeak Bay, the large body of water nearly bisecting the state) almost never gets snow and may only be lightly dusted when a major blizzard hits the rest of the state, yet the temperature is not that far off.

Not the answer you're looking for? Browse other questions tagged hard-science weather or ask your own question.

20
How to create the eternal storm?
4
A localized artificial magnetosphere for Mars
16
Tropical beaches and snow topped ski slopes
2
Could knights navigate a dust storm?
3
How will a dust storm affect infrared sensors such as thermal imaging?
9
What could cause sudden localized atmospheric pressure change?
7
A snow sea: How to make water snow light/smooth enough to obtain fluid properties under 1 gravity
12
Hurricane-force winds or gentle breezes in an O'Neill Cylinder?
5
How should the human respiratory system be changed to be able, in addition to oxygen, to breathe chlorine or hydrogen sulfide?
6
How would a black lightning storm work?