Would cloth coverings be useful for power armor?

Numerous science fiction works feature super soldiers wearing power armor (powered exoskeletons fitted with armor plates that provide varying degrees of protection, strength, speed, endurance, and other capabilities), such as Halo, Warhammer 40k, Fallout, etc. Sometimes, these suits of power armor are painted in camouflage patterns. However, I have read that breaking up your silhouette is very important, and that even if you wear colors similar to those of your surroundings, you can still get spotted easily if you stand out as a person-shaped object. I would imagine that the hard lines present on a suit of power armor would be even more noticeable than a regular soldier. Because of this, wouldn't it be wise for soldiers wearing power armor to wear a baggy cloth layer or some sort of ghillie suit outside? The IDF already does something similar, with their Mitznefet helmet coverings.

One thing about combat in nature — nature has very few sharp lines and edges. A powered suit would be easy for software to detect simply because the motion of the suit would produce a hard edge against its background no matter how it was painted. However, consider this fellow (courtesy Orange Tip Tactical): 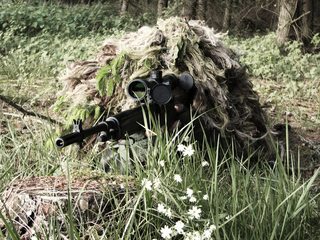 You see, even powered armor isn't invulnerable. It's always a good idea to make it harder for the enemy to see you.

It's certainly true that tanks and artillery look great rolling down the street during a parade, but nothing inflates El Presidente's ego like seeing his latest Presidential Seal adorning all his soldiers! (Image courtesy Pinterest): 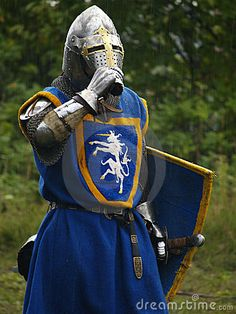 If you're tempted to say, "yeah, but the armor could just be painted that way!" Let me suggest that you never underestimate the pomp and grandeur of pennants and flags....

Most fictional portrayals of powered armor show them to be impervious to everything around them: water, heat, acid... But in reality it's a good idea to protect the articulation (joints). Water is insidious, and if it's bad, acid is even worse. A powered armor that's 100% proof against every acid or base is hard to imagine, and joints will always be susceptible.

Also, you really can't pack every form of protection into powered armor. I personally love the depictions of marine grunts in StarCraft, but if the suits really were that way, you'd have to dislocate (even separate) arms and legs from the body just to get them into the suit. What this means is that you can't perfectly thermally insulate the suit, which means a good flame thrower can be a problem. Cloth coverings allow the suit to be protected from such environmental and combat problems. In fact, you can think of the cloth coverings as a form of ablative-ish armor that can be "burned away" as it encounters things that can hurt (if slowly) the much more expensive powered armor. This is likely a reason why ablative armor exists for real-life tanks (Image courtesy Omsk State University). 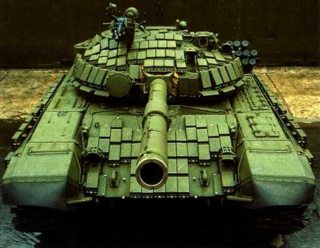 4. The lack of pockets can be a problem

Finally, the last thing you want to waste expensive powered armor on is a few extra mags and a camp shovel! There will always be a reason to haul supplies around. Yes, this could only be a backpack, but why waste all that power? (You know, Powered armor!) Cloth would allow all kinds of things to be strapped, attached, and carried. Add an Acme Quick Disconnect system to drop it quickly in case of combat (Image courtesy Ruck for Miles). 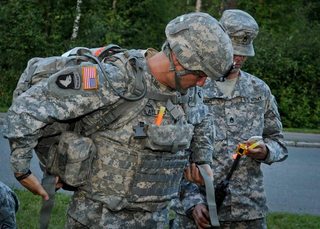 It could be a good way to keep the sun off your armour, and keep you from building up excess heat. Cloth was often worn over armour for this very reason.

For stealth, a ghillie suit is king, you'd definitely want one. Someone mentioned that it could get caught up in joints... but if power armour is that delicate that a shirt getting caught in it messed it up, then it's not combat-practical.

Note that for some purposes, camouflage makes little difference, or you might even want to be seen. SWAT wears all black so as to look scary and shock the enemy, for example.

For breaking up your silhouette, even if it's baggy, I doubt running in power armour will be particularly stealthy. Too baggy might make it more obvious.

You might want to go for something like elbow-length, flowing sleeves, to break up the arms and shoulders, and maybe a long cowl the break up the head and neck, and a skirt to hide the legs. That would be manageable, and it can work with a ghillie suit.

Cloth coverings would easily snag on things or be damaged by battlefield conditions.

It would be better to use disruptive coloration and paint the armor in such a manner that its outline is no longer distinctive.

Cloth coverings would be a very sensible idea for power armors. I could prevent water, dust and mud from getting into sensitive mechanical places. Depending on the weather proofness of power armor, i would find it plausible if power armor is required to have weather proofing done every time it is put on. In fact humanity does cloth coverings for tanks for this purpose.

I doubt cloth coverings would bring much stealth benefits unless:

However a complete cover might result in problems with getting rid of heat, so there are many thing that need to be considered when deciding to use them.

Not the answer you're looking for? Browse other questions tagged science-fiction military .

9
Would genetically modified dinosaurs be useful to the military?
2
How strong would an armor made out of steel grain bonded with living GMO plant root possibly be?
1
How to make powered armor viable as a substitute for guns?
5
I need a 1980s suit of nuclear-fed heavy power armor
5
How Large Can Power Armor Get Before It Becomes a Liability?
2
In this universe with these technologies would HUMAN infantry still be useful for the military?
11
Would a portable watchtower be useful for the premodern military?
5
How to kill a marine in power armor?
5
How do examples of Power Armor stack against that of tankettes, and other small vehicles?
3
Would my Army's Inspectors General be useful?