Which Crops/Other Plants Could be Grown in a “Tropical Mediterranean” Climate?

In my book series, the region around the capital city of one of my planets has a very odd climate: while it has the year-round warm-to-hot weather of a tropical climate, it also has an exaggerated version of Mediterranean rainfall patterns: bone-dry summers and a winter monsoon season. I input the area's climate into a koppen climate calculator I found on the internet and it came out as Csa (hot-summer Mediterranean) but just barely:

Note: the planet's culture and technology is based on an amalgamation of Ancient Greece, Ancient Rome, and Byzantium so keep that in mind in regards to agricultural technology.

Lots will grow in that climate

After some googling, if we plot your average along the graph, it's about the middle of the average daytime max and average nightime min:

Your rainfall is about twice Perth's, but fits the same general shape of a winter peak. "14 inches" is 350mm of rain. So your land is equivalent to a plot of farmland near Perth which is irrigated over what rains by a factor of two. 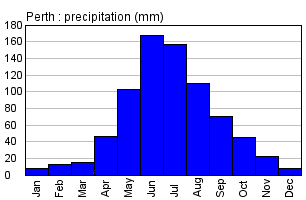 A lot of things can grow in this climate. Sorting by month of planting:

The most exported crops from that region are Wheat, Barley, Canola, and Lupins.

Not the answer you're looking for? Browse other questions tagged climate flora agriculture farming or ask your own question.