How Dragons Can Hoard People

Dragons hoard things, they're known for it. In this setting, they're quite possessive and like hoarding. However, some dragons have been observing humans and noticed something odd: when introducing a friend or loved one to someone else, humans say things like "Hey Dave, this is Linda, my new wife!" or "Hey Marcus, these are my kids, Mindy and Carla."

These dragons investigated through a combination of scrying spells and spying minions (dragons always have minions. And gold. So much gold. You can never have enough gold.) and found humans have concepts like:

Humans don't often question these relations, which the dragons interpret as a sort of ownership unique to the human species. This ownership is doubly odd to the dragons because it's mutual; if someone belongs to you, you belong to them. The dragon's closest analog is their obsessive connection to their hoards.

However, as the dragons pondered their findings, they realized something upsetting: why is it humans can own other people, but dragons can't? Understandably outraged, the dragons spread their findings far and wide, and now the dragons want to right this wrong. So, the question is, how can the dragons gain human hordes?

They just need to found a new religion, based on the worship of dragons. The dragons will reward the true faithful and punish the blasphemous ones.

Religion and indoctrination walk together since forever. It's not something the humans aren't used to.

Every religion has its own set of rules and prohibition to be followed. Again, nothing brand new for the human minds.

Do you know any religion which is happy to share their supporter base?

They should enter the feudal society. We like to think of feudalism as a fully consistent, stratified pyramid: with kings on top, who are served by dukes, who have counts, who have barons, who have peasants. Video games haven't helped with this misconception.

In reality, feudal relations were complicated and inconsistent. Firstly: before the nation state, there were barely any borders between large realms. Two land owners agreed which fence marked the boundary between their farms, but their liege lords would not be able to say the same. A land owner at that theoretical border would probably be in some arrangement with both lords, even if they would not be equally strong. The feudal period was one of contracts between nobility, and those contracts could cross and go sideways.

Contracts existed between neighbouring rulers of equal "rank", which is when they were called alliances or pacts. And contracts between small and large were often of the nature of the big entity providing military protection, and the small entity paid taxes. But a wise feudal lord would have arrangements, in varying degrees of strictness and expense, with many other lords in the region.

What this means for your dragons? They can have a castle built (or conquer one) and declare themselves barons of the fort and the surrounding villages. They can consider the peasants their property if they want: the lowlife wouldn't have more than one liege lord. But they can do so without swearing allegiance to a duke or king in a way we are accustomed to.

They can instead engage in relationships with other, human lords in the region. And they would probably be the less powerful partner in most of those relationships, as they would own just a single castle, but the feudal contract was so important in the medieval era that both parties considered it their "ownership", or their duty to maintain. Breaches were rare, in either direction. It was seen as a mutually beneficial partnership, which is why the word "liege" could apply to either party in such an arrangement. I have read a historical text that called the count of Holland, governing a small swampland constituting little economic value, the liege of Lorraine, a duchy so powerful it could just secede from the Holy Roman Emperor (and engage in a new contract with the more lenient king of France) and it took years to conquer them back.

That's the first solution I can think of for your dragons: make them do what every other person of power was doing at the time.

Find a king who has only a daughter.

Demand her. (A grand tradition of dragons.)

Marry her and demand half the kingdom now and the whole when the king dies. (The traditional reward for killing the dragon and saving the princess, but -- who wants to argue with the dragon?)

Wait for the king to die, and then for the princess.

Be a good king so that the subjects don't run away. In particular, dealing with invading armies yourself rather than letting your subjects get slaughtered. (Hmm. You'd want to do that anyway to prevent the waste.)

Have you considered having your dragons go into the corporate sector and becoming CEOs of megacorporations? CEOs are often seen as having control or dominance over their workers and their lives, especially in depictions of potential corporatocracy as in cyberpunk. However, this doesn't have to be restricted to cyberpunk. It could just as easily work in an early Renaissance (i.e., rise of the merchant class) or Industrial Era setting. You could even have the dragons go into banking and have a win-win. Not only are the humans giving them money, but they are amassing their own horde of people through their system of employees.

In many Western countries it is expected that people will leave jobs and go elsewhere when opportunities arise, so the idea of being "owned" by a corporation might seem weird, but in some cultures (like Japanese work culture) you are expected to stay with a single company for life. Indeed, the depiction of the corporation as controlling one's life was especially the case in the U.S. prior to the passing of labor laws in the 21st century, when companies far away from any other major population center would build "company towns" which were pretty much glorified prisons where the people living there were dependent on the company for food, water, shelter, and even transportation in and out of the town (there are examples of company towns in other countries, but I know more about the history of them in the U.S.). Sometimes people got fed up of being dependent on the company for basic needs and rioted and the company usually suppressed these with extreme force. Even after that there was often this expectation of lifelong loyalty to the company that employed you, as you can see in a lot of fiction set in the 50s-80s.

Shadowrun is a good example of how dragons can make hoards by going into the corporate sector. On a completely unrelated note, vote for Dunklezahn. 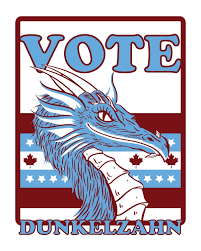 Newsflash $-$ They Already Did.

Dragons are the dominant species on the planet. The leaders of the major nations are dragons. This is a closely guarded secret, known only to the higher council mages who are paid a handsome sum for their cooperation, and for hunting down rogue anti-establishment mages.

Dragons live for thousands of years and are powerful spell casters. It is no trouble for them to appear human. Of course every few decades one must change their appearance and name to give the illusion of mortal human rulers dying and being replaced.

This is the reason the major nations have existed for thousands of years. It's because Dragons live long enough to either (a) plan that long or (b) erase their nations's history so it seems like the nation is really old when in fact they established it only 3 generations ago.

Another benefit is the Dragon Kings can arrange phony wars (see the famous England vs. France conflict) between neighboring kingdoms to keep the peasantry on their toes (you need me to protect you) while in fact the start and end dates are agreed long in advance.

Not the answer you're looking for? Browse other questions tagged society magic fantasy-races or ask your own question.

6
How Can Dragons Get Humans To Accept Living Inside Their Mouths?
4
Protecting Mermaid Pearls
2
How Can People Hoard Dragons?

15
Tame and Sovereign Dragons: the opinions of the Sovereign Dragons
5
Dragolitics, or how political structures work when rulership is determined solely by individual might
6
What events for the Reconstituted Dragon ‘Olympics’ can best avoid civil war?
3
How would winged humans fight dragons?
2
Dragon Mothers: Recruiting?
4
Dragon Children: Bringing Them Into The Fold?
2
Dragons Rising: Subverting the Dragonslayers
2
How Can People Hoard Dragons?
6
How Can Dragons Get Humans To Accept Living Inside Their Mouths?
17
Explaining why dragons leave eggs for their slayers