Could a pre-modern civilization make a gas canister with rough valves and pressure regulation?

I wanted to have a gas cylinder that would hold up to about 10 litres of gas (oxygen, mainly) at 20 atmospheres of pressure. Or, if that's impossible, 7 atmospheres would suffice.

The setting is pre-modern, so late medieval tech at best. I'd like the lowest tech solutions possible, but anything from the 16th century would be fine.

These don't need to be high quality or particularly safe gas cylinders (early boilers were plenty dangerous), but they need to basically work. They don't need to be precise or scientific in the exact pressures and measurements, either, but could work in the longstanding tradition of playing it by ear, where journeymen learn traditions from previous masters. They would also need to be able to exchange gas between canisters, using smaller ones to fill bigger ones.

I actually have the details worked out for how they can generate pressurized gasses. The question I have is how they contain it at those pressures. I can give additional details if necessary, but you can likely guess, if you've seen my other questions of late.

If they could get suitably pure copper, it has more than enough tensile strength for the task... but I don't know enough about the development history and purification of copper. Bronze is stronger, so it may be better. Since copper and bronze can be cast much more easily, they may be much easier to form into canisters.

Early boilers were made out of many small, copper, riveted plates, since copper withstands heat better than bronze. But the heat combined with the riveted construction made it limited in the pressures it could withstand (something like 500 psi was commonly handled, all the same). When they developed larger plates, the boilers got a lot safer.

This suggests several advantages for our canisters. Since they only need to contain a few litres of gas/liquid, instead of huge amounts of a boiler, they can be made possibly out of a single mould hammered into shape, instead of many small plates. Since it isn't a boiler and doesn't need to handle high temperatures, we can use bronze instead of copper. And since the heat from boilers is said to have weakened the copper considerably, we could assume our bronze canister can handle much greater pressures.

Notably, thickness makes an exponential difference to strength, so presumably what they lack in pure copper and flawless bronze alloys, they could make up for with thicker, heavier canisters? Of course, some merchants will use thinner, cheaper, less safe canisters, as is good for a story/setting.

I had trouble finding information on the historical development of these, aside from very broad strokes. I don't need highly tuned pressure regulation, but there will need to be valves that allow for gross adjustments of pressure. It is also necessary that it's possible to refill one canister with another.

So, within the constraints of the setting, would it be possible to produce suitable valves?

Is an invention from 1679 sufficiently Pre-Modern for you?

Denin Papin's Steam Digester, invented 1679, could safely handle 6 Bar(for boiling temp of 165C), and supposedly would rupture at about 15-20Bar, if the pressure release valve malfunctioned.
Supposedly, the action of this pressure relief valve led to the first concepts of steam engines! When near the release pressure, it would open, release some pressure, and close again, quite energetically. 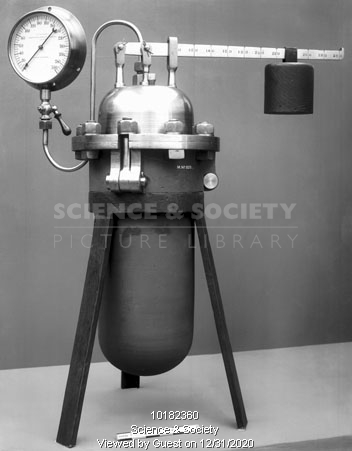 I think the answer to your question is as simple as could.the civilization manufacture a cannon. If yes, the same metalurgy will easily contain 49atm being the liquification pressure of oxygen and hence give you todays storage densities.

Cannons were never particularly safe though

This answer is for Oxygen, other gases have different liquification pressures

I think that the best example I would look at would be the early fire engines (steam engines) used to drive pumps in the Cornish tin mines. The issue that they had (and issue that you will also find) is that they were not very efficient due to leakage. However, these did not come about until the end of the 17th century so are probably too late for your needs.

One last thing to think about is that the ancient Greeks did come up with a type of steam engine, the Aeolipile (written about by Hero of Alexandria). It is therefore realistic that this could have been developed, but it was just not.

Valve wise, there is not much evidence of anything that I know of that would have been able to reliably hold gas under pressure, esp if you are keen on there not being leakage. So theoretically, you can have a cylinder that could contain gas at a certain pressure, but there is not really any way to get that gas in or out without it leaking all over the place.

Not the answer you're looking for? Browse other questions tagged reality-check medieval alternate-history scientific-development pre-industrial .

50
What does a medieval army cost?
9
Semiliquid atmosphere - Is my premise/conclusions correct; and will it get the result I want?
38
Create "gold" from lead (or other substances)
10
What is the highest pressure any life form could theoretically survive in?
4
Could a society attain 1800s technology if limited to using copper and bronze?
73
Is it possible to create a practical sword that's naturally toxic?
8
Are these atmosphere compositions for habitation in space plausible/do they cause problems I don´t see?
3
Alternative Pre-Modern Rocket Fuel to Gunpowder: Can you make a naphtha rocket?
1
Could you develop Electrolysis with Pre-Modern technology?
4
Can I have an otherwise High Medieval society, if they are in perpetual Bronze Age?