What mammal most abhors physical violence?

Imagine a world of anthropomorphic animals (if you're thinking of Zootopia, that's a reasonable starting point). People in this world have a lot in common with humans — opposable thumbs, language, the ability to walk on two legs, etc. — but also retain some characteristics of their bestial cousins.

For the most part, physical violence among unrelated people is frowned upon. (However, there are notable exceptions; gatherings of male bovines and/or cervines at "certain times of the year", for example.) What happens among family and close friends is a little different, however. Equines and suines are known to nip at each other, and canines are especially notorious for "roughhousing".

Of course, the opposite is also true.

What type(s) of people would find this sort of thing most abhorrent?

Answers should be based on the behavior of real animals, and should be limited to land mammals. (No whales, seals, manatees, etc... or bats¹.) Also, there are no humans in this world, though there are other primates.

(¹ There are no bat-people in this world. Unlike Zootopia, people have a much more physically-plausible minimum size, which means bat-people wouldn't realistically be able to fly, and I don't want people running around with unusable wings.)

To put this in more human terms... some humans consider a certain amount of friendly physical contact perfectly normal; slapping a friend on the back, or "play punching", or giving your younger brother a "noogie". Canines would consider this sort of behavior extremely normal, if not "tame". I'm looking for (a) species that isn't/aren't necessarily opposed to any touching, but would be appalled by anything that might be construed as violent physical contact, such as the preceding examples. OTOH, species with a near-pathological aversion to any physical contact are okay too. (And I mean any. One that hates being hugged, but likes friendly scratches or mutual grooming doesn't qualify for 'hates any touching'.) 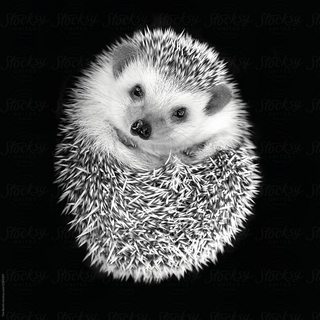 Some mammals respond to threats with aggression. Carnivores have effective weaponary for violence. Many herbivores have learned that the best defence is a good offence and many will fight over mates.

But there are some who respond defensively. Hedgehogs do. They have a passive and effective defensive system. They are not build to fight nor to flee, but to curl up and let their spines do their job. They don't have powerful limbs to claw, and their teeth are sharp, but small. Moreover, unlike porcupines, their spines are not detachable, so do no lasting damage to one who investigates too closely. Their mating fights are at most "a bit of argy-bargy" with no teeth of claws engaged.

When the danger passes they uncurl and go about their business. They are insectivores that eat a lot of slugs, but there Slugs aren't people and so they don't count.

The anthropomorphic form abhors violence, because its instinctive reaction is to defend passively rather than to hit back. The hedgehog doesn't cast the first stone. They are phlegmatic and stoical.

The same can apply to African spiny tenrecs, the American armadillos and the monotreme echidna. This last one also has tiny teeth, reducing further its ability for violence (unless you are an ant) 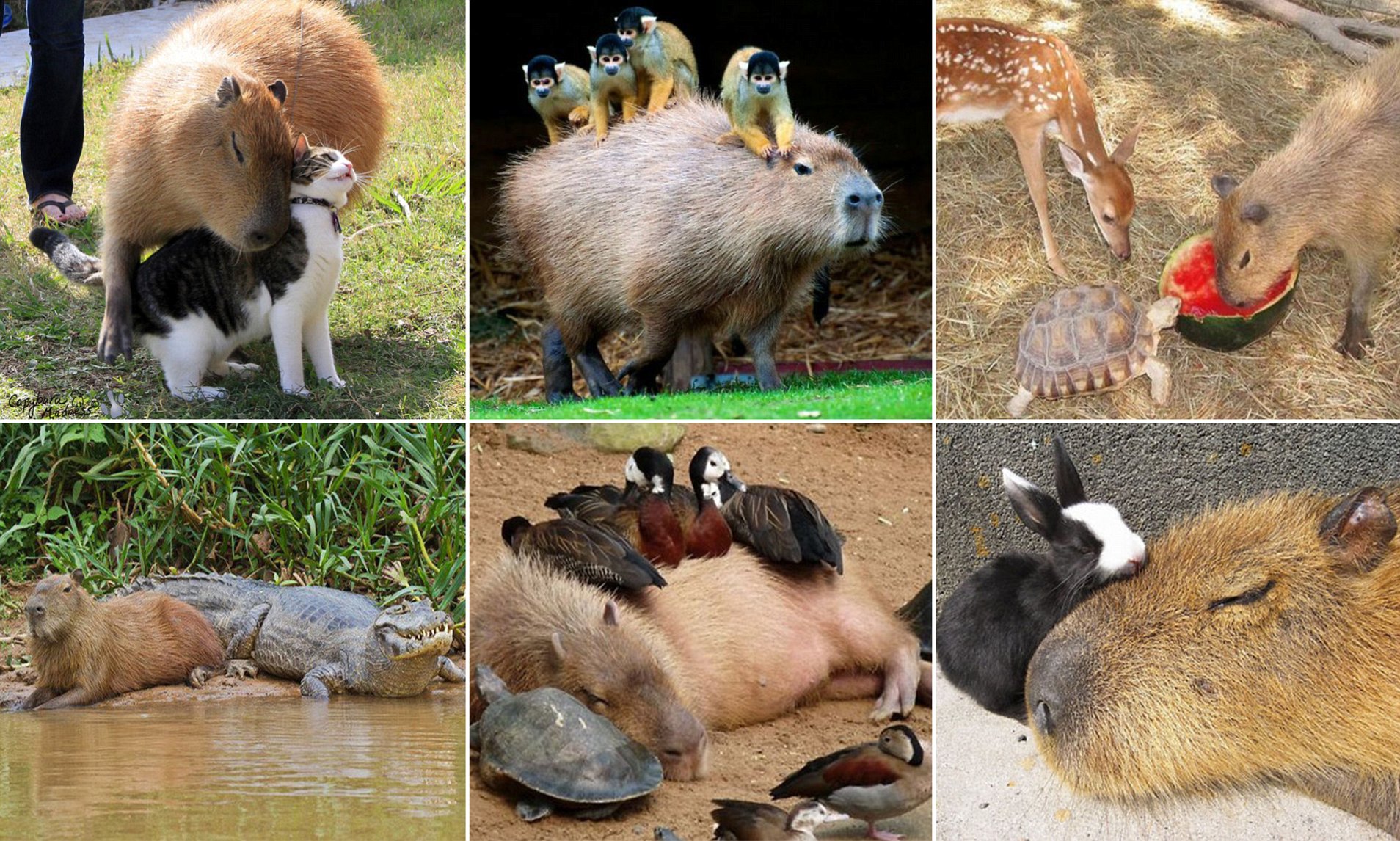 Capybaras are somewhat known for being extremely relaxed around other animals and they are also quite social. They share their natural habitat with many other species and with some they have developed a natural symbiotic relation (with birds, for example). They also give an alarm when sensing a predator, which others around can benefit with. On the other hand, for reasons unknown to me, they also seem pretty chill with predators such as caimans.

Quick googling will show you a lot pictures of capybaras hanging out with other animals. It is worth noting though that violence is quite common in nature (duh), so even capybaras are known to bite when threatened.

The Sloth, of course.

The concept of ANY energetic physical movement, much less that directed to injury, is anathema to their very way of life.

It is rumored that they redirect the usual instincts for physical violence into political intrigue, but no-one has waited around long enough to verify this as yet. It can be hard to tell by body language alone.

Image of a Sloth taking a noon Siesta: 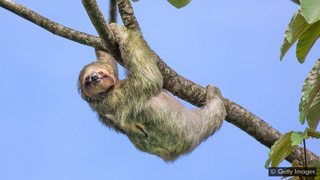 VIDEO of a Sloth in !!!Fighting Frenzy!!!

Scientists have studied the frequency of aggression in mammals in several studies. This study investigates the roots of lethal violence across Mammalia. However, this study is only based on field reports of positive confirmation that animals engage in lethal violence, which can be seen in how primates appear hyper-aggressive. Primate are hyper-aggressive, but they're also highly popular subjects of study and so their behavior has been heavily documented compared to something like a cricetid rodent or opossum for which few studies of behavior are made. This study also does not count the frequency of non-lethal violence and appears to be missing several taxa (it shows squirrels and opossums as violence-free when most field workers on opossums and squirrels will tell you how they will regularly kill each other when they have the chance). And groups that don't have a lot of killing still fight each other, like rabbits and kangaroos.

Also an important thing to mention is that bonobos, despite their stereotypical depiction as peace-loving, are not an example of a mammal that abhors physical violence. Bonobos are actually more violent than humans, it's just that they're less violent than hyper-aggressive chimpanzees. Humans are actually pretty bog-average in terms of aggression for a primate.

My guess, the mammal that would most abhor physical violence would be something like an opossum. Note, this does not mean non-violent, just avoiding physical violence. Opossums hate to be around other members of their kind except when they want to mate, and if they hate being around each other, it reduces the chance for physical violence. Take a look at the chart showing the frequency of aggression again. Look where the highest rates of intraspecific killings are: Primates, colonial ground squirrels, elephants, pack-hunting canids, social mongooses, and colony-living pinnipeds. Notice a pattern? Increased violence appears to be correlated with sociality. This isn't me just idly speculating here, it's what other scientists have suggested drives the evolution of aggressiveness. The violence is literally inherent in the system.

Possibly some island species might be less aggressive. Increased docility has been suggested to be selected for in island environments because food and space is so limited and there are fewer predators. However, it is not clear if this is always the case. For example, Galapagos fur seals, which are well known for their naive, friendly, inquisitive behavior towards humans, still fight violently among each other in disputes. Mother seals have been known to kill their own offspring if an older sibling harasses their younger one too much.

tl;dr: I would say opossum. But in this case you would get a violent reaction to physical contact at all

My answer, after about half an hour of poking around the Internet, is the prairie vole.

I went looking for species that do male courtship displays as their primary mating ritual. Why? Because every species that does combat or dominance displays for mating rights is automatically less likely to avoid violence -- there's at least one arena where violence is fundamental to their nature. Female courtship displays are often contested by multiple males fighting it out. I found a seemingly trustworthy website that described the prairie vole:

Trying to confirm that citation lead me to a bunch of research articles about prairie voles and oxytocin, for example, this one from the journal Nature. It seems that their easy-going nature and strong pair-bonding attracted the attention of many researchers who are investigating how brain chemistry relates to social relations.

Most other species I could find that do courtship displays were birds (i.e., not mammals) or where female does display with the males fighting afterward. 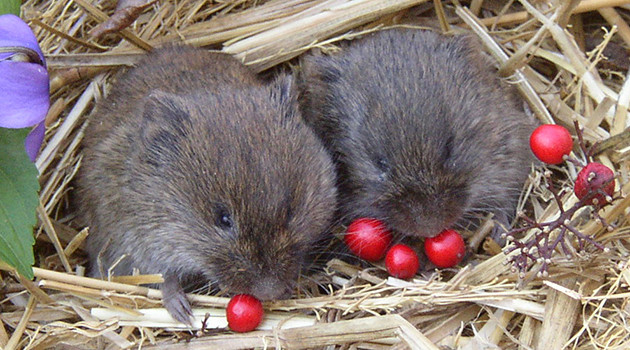 I think the best candidate for this would be the Naked Mole-rat. They are classified as eusocial creatures, which means that they behave as a collective to support a single reproducing female rather than reproducing individually, similar to many bee and wasp species. They are the only mammals that behave in this way which makes them uniquely qualified in their non-violence.

Their social structure means that there is no incentive to fight within the colony. There is no mate competition because there is only one reproducing female (the "queen"), and only a few reproducing males who are physiologically distinct from non-reproducing members.

The only individuals who leave the colony are called dispersers. They are also physiologically distinct from non-dispersers and they leave to join other colonies in order to prevent too much inbreeding. They leave voluntarily and peacefully, so there is also no violence associated with this behavior.

There is one significant exception to their non-violence, which is when it comes time to replace a queen. When a colony lacks a queen a number of other females will go through rapid sexual maturation and then violent competition until one of them emerges as the new queen.

This could actually be interesting from a story telling perspective, a totally peaceful and cooperative species that occasionally goes through a period of serious violence before returning to communal cooperation. Perhaps they are secretive or ashamed of that behavior and never show or reveal it to other species, or perhaps they are unashamed of these events and see these events as unfortunate but necessary for the good of the colony.

Bonobos, unlike common chimps, are matriarchal and non-violent, at least within troops. They can be described as randy little buggers, as they use sex to reduce social tensions. They do eat meat, including lower primates, but this is a small part of their diet.

< :-) >
Without a doubt it's the Honey Badger.
They can't stand violence from ANYTHING.
If a Honey Badger meets something that's violent, might be violent or can be suspected of thinking that violence may be a good idea it immediately uses all possible means to eliminate the violence source. If this is not possible (which is usually not the case) then it will do its best to drive off and discourage said putative violence monger.
It usually works.
A lion will usually think thrice before taking on a honey badger. Not that it has much choice. If a lion encounters a honey badger it may consider itself taken-on.

You'd have to be crazy to be violent around a honey badger.

I was going to say that a Cape Buffalo abhors violence almost as much as a honey badger, but I now read that Cape Buffalos have been found which have been killed by Honey Badgers - so I guess a HB hates violence more.

Not the answer you're looking for? Browse other questions tagged society culture zoology .

27
What physical and social effects could two stars cause?
24
How to explain the co-existence of peace and violence in religion
2
Mammal producing spider venom
3
A Mammal with Electrical Defenses
5
Most efficient actinopterygian jaw structure?
4
Why would being (left/right)-handed be considered a disability in a world where most are ambidextrous?
3
Most overall likely culture for cats living in caves?