Imagine a humanoid creature with only 1 eyeball the size of a tennis ball, it has a rare genetic mutation so it had 2 conjoined pupils! I suspect since the 2 pupils are just side by side it would not be able to sense how far objects are relative to each other since the focal point is very short or it brains cannot tell the difference because of the fixed focal point so there is insufficient information to patch the missing puzzles?

Can they perceive depth?

YES. Of course they can. You don't even need the mutation, a single eyeball with a single pupil can perceive depth.

How can we know this?

Are they able to perform stereopsis?

No useful information will be available by the conjoined pupil even though there technically will be two feeds of image. L Dutch has given an answer below which I agree with and have upvoted.

As you correctly suspected, there won't be any different information to infer the depth from. 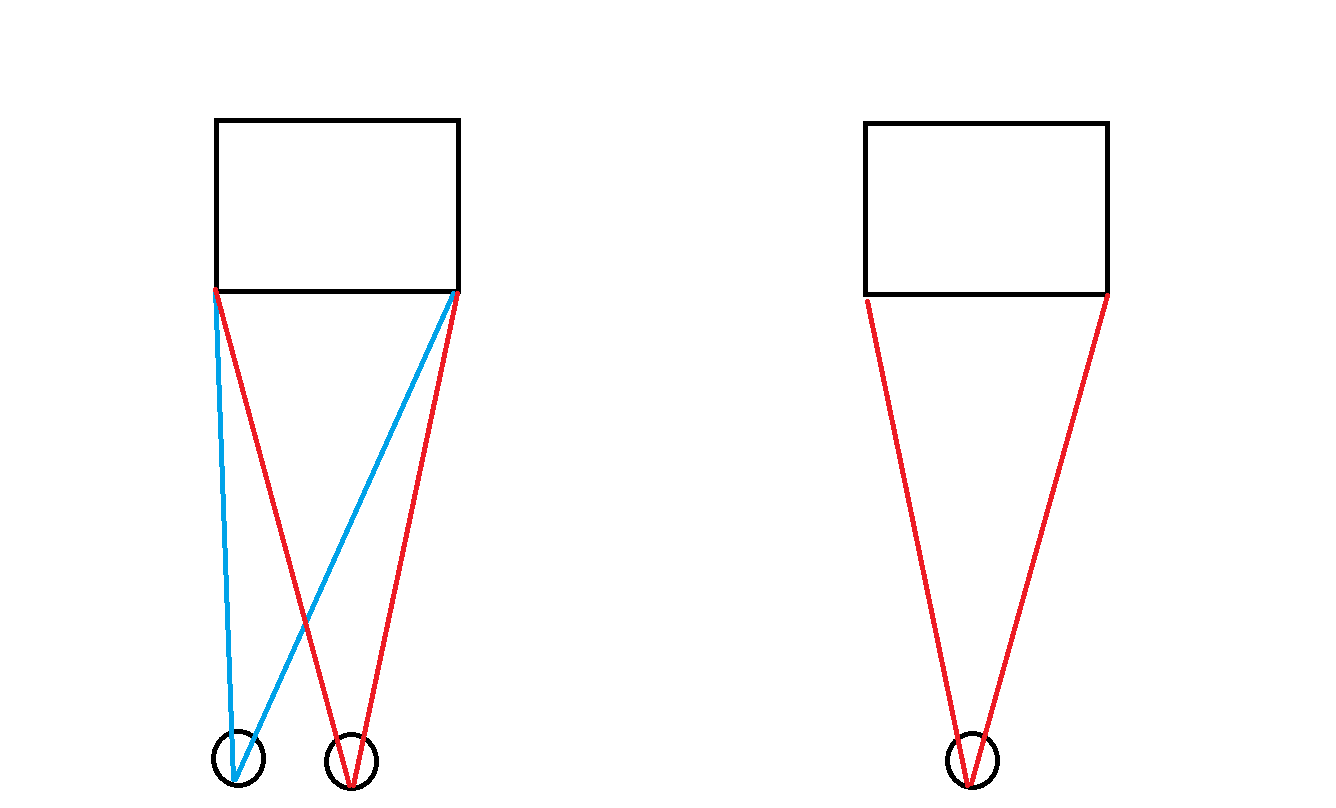 As you can see from the sketch above, a two eyed viewing system, due to the separation between the two eyes will give a slightly different view of the same object.

A single eye instead, while still giving a small separation between the images due to the non zero distance between the pupils, has the issue of sharing the same retina. How is the brain supposed to tell through which pupil a certain stimulus came?

In the binocular view it knows which is right and which is left, in the monocular it doesn't.

Not the answer you're looking for? Browse other questions tagged creature-design xenobiology vision or ask your own question.

16
Is there other way to perceive depth beside relying on parallax?

2
How can I get a giant banyan tree with mangrove roots?
1
Can we exterminate all insects by creating insects with an adaptive immune system in the lab?
14
Can an Alien Breed With Earth Animals?
26
How would a creature see with two pupils in each eye?
0
Proud warrior race with terrible depth perception. How do they look?
28
A fast aquatic predator with multiple eyes and pupils. Would these eyes be possible?
3
is it biologically possible for a creature that can be compatible to reproduce with any creature?
0
Can a flying predator have slit-like pupils?
5
Can you combine chromatophores with exoskeleton
16
Is there other way to perceive depth beside relying on parallax?