Logistics of crafting ammunition after the apocalypse?

So, nuclear war has wiped out civilization, and brought humanity to its knees. Nuclear winter, radiation and violence has turned the Earth into a wasteland; a slaughterhouse and a breeding ground for monsters. The few human beings who survive must contend with violent raiders, mutated creatures, and mutated humans, and for that purpose almost everyone who's able carries a gun to defend tehmselves- AR-15's, 9mm handguns, and shotguns being the most common means of self-defense.

The problem is: ammunition. Since the war human civilization has been shrunken back to small city-states and farming villages scattered across the desert. They lost the industry that allowed for ammunition and whatnot to be produced. But, I still want them using their guns, even after decades or centuries. So here's my question: Would it be possible for them to craft ammunition after the apocalypse?

Huge caches of ammo and guns.

There used to be a lot of people. Back when there were many people, manufacturers made lots of guns and ammo for all the fighting all those people were going to do. Now there are just a few people left. The giant troves of guns and ammo remain, and they are more than enough for the little bit of fighting that now goes on. Guns and ammo keep.

Twenty-five years later, I was asked to write this story. I trekked back to my now-departed father’s gun cabinet, grabbed the .303 and a few cartridges and marched down to the pond-dam range. Blam! The gun fired! The ammo is at least 75 years old, if not 100.

“I’ve shot factory loads from the 1870s, and they went bang and hit the target accurately,” said NRA Museums Senior Curator Doug Wicklund, affirming that ammo can indeed last a long, long time, and the .303 wasn’t a fluke.

Your people have retrieved a few dozen truckloads of bullets and guns and they keep them dry and secure. Like everything else in the wasteland, they conserve what they have. 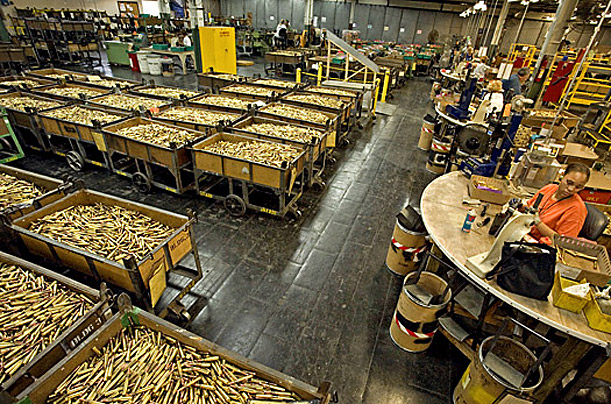 There are four components to consider:

Projectiles are by far the easiest to make. Assuming that the EPA was wiped out, go back to making lead projectiles. This is trivial with 1890s technology and decades or centuries after the apocalypse it is unlikely that there will be much functional kevlar armour remaining to resist them. There's a catch though - manufacturing projectiles that will not disintegrate as they leave the barrel of the latest 5.56mm assault rifles is tricky - in order to (try to) maximise the wounding potential of the round there is a ferocious turn rate from the grooves in the barrel. (Don't try firing older 5.56mm ammunition through new 5.56mm assault rifles.) 1890s technology may not be up to the job, and basic lead projectiles definitely will not work for these rifles. Read here for much more detail.

Propellant is surprisingly tricky. It's relatively easy to make gunpowder - it can obviously be made with quite basic technology - but making high quality gunpowder with each grain shaped ideally for the optimum burn rate (fast burning for pistols and shotguns, slower burning for rifles) is difficult. Low quality powder that burns too quickly will cause excessive wear or even breach explosions, while powder that burns too slowly may fail to cycle a semi-automatic or automatic weapon. (The projectile will also go either too high or too low at range.) @AlexP has correctly noted that semi-automatic weapons and their ammunition were manufactured in the 1890s, but the manufacture of the ammunition and its components was undertaken by industrial concerns, not cottage industry. Bolt / lever / pump action firearms will be more forgiving of low quality powder, so these are likely to be the firearm types in use. It is also likely that the effective range of firearms will be shorter due to the inconsistent powder making tight groupings at long ranges impossible.

Primers are relatively dangerous to manufacture - they are explosives sensitive enough to explode if struck sharply - but the techniques for manufacturing them without losing fingers / limbs / factories are easily within 1890s technology.

Cases are easily produced given a supply of brass and a lathe. This is also within 1890s technology. Cases can also be reloaded a number of times if they are recovered, much more cheaply than manufacturing new ones.

So, all of the problems are potentially solvable. However, they are only effectively solvable on an industrial scale by component type. In order to have all of the weapons and ammunition you want, you must have a separate production line for each of the following:

This is a ridiculously complicated manufacturing requirement which is frankly unachievable without a civilisation which is back up and running again with lots of manufacturing capacity. It also replies on the firearms still working - eventually the pre-apocalypse firearms will wear out, and 1890s technology can not be used to manufacture spare parts for some of the firearms listed. What is far more likely is that by the time the pre-apocalypse ammunition stocks have run out there will be the following production lines:

It may not be exactly .45 if there are lots of pistols and/or projectile dies of a different calibre around (it could be .44 Magnum if you really want it), but it will be one pistol and one carbine with a high-ish calibre common cartridge, as was used at times in the western United States by some of the cowboys in the 19th century, for the same reasons. A pistol that can be fired rapidly at short range, a carbine that can effectively engage targets out to about 100m, both over-engineered to not explode if a "hot" load of powder slips through quality control.

Producing certain ammunition is not tech intensive: smelting lead and letting it drip from an height will make round bullets, stones can be worked to make a something round enough to be fired by a gun, one can load a cartridge with metal shards.

Sadly, none of the above is remotely similar to

They would resemble what people used in their rifles during the first years of usage of gun powder based weapons.

The problem is defined in your question. You've stipulated a general level of technology of about the 1890s combined with a lower level of industrialization than existed in the North America/Europe at that time. You then want to produce modern ammunition (.308, ,233 etc)

Using the US as a template most of the great names in firearms manufacturing Colt, Browning etc were well established by then. This period also corresponds to the great era of railway construction and a massive expansion in steel production as well as the mechanization of production (Henry Ford is just around the corner to).

All this means in theory you could produce the ammunition types you want in quantity with relative ease - if not with modern propellants. But you also lack the vast urbanized workforce and factories (the scale) as well as the raw materials and transport networks needed to do so.

No cities filled to bursting with new migrants, only small towns and villages and no great factories as a result. No railways or road network to deliver the raw materials you need and no-one to mine/manufacture them for you even if you had a transport grid.

At best firearm and ammunition production will be a cottage industry - smithies and armorers producing limited numbers of rounds using recycled/re-forged materials and job lots of powder/primer of varying quantity in amounts large enough to meet local demand (if their lucky and no-one starts a war).

In short you wont get consistency in calibers or in the quality and quantity of ammo until some form of national trade grid and industrial base is established.

In fact your survivors are probably better off sticking to muzzle loading, rifled muskets and black powder etc because they WILL be easier to manufacture in quantity and to consistent standards. This is because the manufacturing processes involved are simpler & fewer in number than modern firearms and you don't require as much specialized equipment or rare/hard to get inputs. Your whole town can be armed and given enough rounds to defend themselves from most threats.

I am going to cheat here, but maybe you like my cheat.

Have you thought about pneumatic rifles/airguns?

With that tech level you should be able to build the air tanks necesarry to hold the pressure. It's better than blackpowder as it doesn't give away your position and is much more silent. Not to mention it doesn't require dangerous and complicated chemistry like primers and smokeless powders do.

It has it's own drawbacks, but it's up to you to determine whether these drawbacks outweight the benefits in your setting. The quality of bullets worries me the most about your setting. With cottage level industry producing good quality ammo is going to be an issue.

25
How would I make guns uncreatable in a post-apocalyptic world?