How can an organosilcon lifeform break down silicates

I have a few organosilicon characters, and I like to know how things work. Some of these types of creatures make shells, but others just reinforce their organic flesh with the silicon.

According to my brief research, silicon exposed to oxygen makes something that is hard to break the bonds of, and that glass can be broken down by some chemicals containing fluorine. So this creature's digestive system would probably contain fluorine. What would be the best fluorine containing chemical for this?

But how does the carbon component of this creature affect this? Would the fluorine containing substance impact the organic bits negatively, and if so, how do I get around this?

Edit:I may have misunderstood something somewhere, but I meant breaking the silicates down enough for use, but not necessarily separate it from the oxygen. I read hydrofluoric acid makes the fluoride combine with the silicon, which I do not want.

Well, if our stomach uses HCl, chlorhydric acid, to digest food, your creatures could go with HF, fluorhydric acid, to break down silicon based molecules. Despite being a weak acid, it's still highly corrosive.

And as our stomach cells are protected by self digestion from a layer of mucus, the same can happen for their stomach.

The creatures can use a mixture of HCl and HF, or have two stomachs, one using HCl and one using HF.

You do not need to break the silicon oxygen bond. 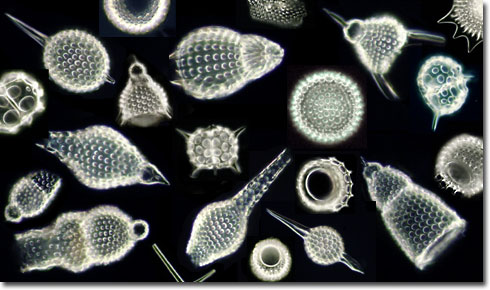 You are right that SiO2 is hard to break. But your creatures can use the silica molecule (silicon and oxygen) as a unit. They can build things out of those units. Depicted: radiolarians, who build an impressive variety of shells and hard structures out of opaline SiO2, which they take out of solution. https://ucmp.berkeley.edu/protista/radiolaria/radmm.html

Radiolarians could be considered organosilicon creatures. Your creatures can use the SiO2 building block to make teeth, shells, scutes, bacula, or whatever your story requires.

What would be the best fluorine containing chemical for this?

Fluorite is the most common one on Earth, I believe. It isn't too unusual, but it is generally found underground rather than in surface deposits.

Would the fluorine containing substance impact the organic bits negatively, and if so, how do I get around this?

Oh, very badly! Hydrofluoric acid is astonishingly nasty stuff. You keep it in containers made from fluorine compounds such as teflon. Anything that's not a fluorine-based compound just isn't oxidised enough, and the HF will eat it.

You might get away with some kind of mucous layer in the stomach and digestive tract, but as it would react with the HF you'd deplete your store of the chemical sooner than you'd like. I'm not sure what kind of organic fluorine-bearing polymer your beasties could use, but you could pick almost anything as they already have clearly pretty weird metabolisms.

I meant breaking the silicates down enough for use, but not necessarily separate it from the oxygen. I read hydrofluoric acid makes the fluoride combine with the silicon, which I do not want.

Oh. In which case don't use HF at all, because you'll lose it.

Just produce some suitable biomineral for claws and teeth and crop or whatever that's just harder than silicates. Something like corundum or carborundum would do. Other questions on this site discuss biosynthesis of superhard minerals. This news article mentions bacteria that can do it. Chomp up the glass and redistribute it like any other nutrient and deposit it appropriately. Job done!

As an alternative, you might consider a basic, rather than acidic digestion using nice hot sodium hydroxide to dissolve quartz and form sodium silicate, commonly known as waterglass. It is a useful compound by itself, but when put in a suitably acidic environment you can precipitate the silica back out again.

This requires some fairly unusal biochemistry and a fairly energetic digestive tract, but TANSTAAFL!

Now you know why plants and marine diatoms make their silica from silicic acid they get from the environment, instead of having to do it the hard way like you want.

Go alkali instead of acid.

Then KOH is enough. This is far FAR less toxic to biological systems.

As a bonus potassium is something already sourced from rock and biology uses in abundance.

Or you can use sodium instead. you need a lot more heat though.

Or in just water you can use molybdate (MoO4) and phosphate, this however is slower than the other methods.

Not the answer you're looking for? Browse other questions tagged science-based chemistry or ask your own question.

1
What Would Beaches Look Like if Silicon Didn't Bond to Oxygen?
8
The Biology behind a slime that uses hydrofluoric acid to disable and digest prey.
6
Which hydrogen halide to have in blood to replace water?
3
What would be the chemical composition of the crust and core of a planet comprised primarily of diamond?
4
Can a biological system be used to power an android?
16
Digestive system of the “Ultimate Omnivore”
7
A stronger replacement for calcium carbonate in super-strong scales?
5
What single or two materials are suitable to fit inside of a glass bullet to make it explode on impact?