Fifteen years later, one of Müller's students, Hermann von Helmholtz, using a simple and elegant experiment that can be easily reproduced in a student laboratory workshop, measured the speed of propagation of impulses in the frog's nerve. In his experiments, Helmholtz irritated the nerve at two sites spaced 3 cm apart and measured the time from the moment the stimulus was applied to the maximum muscle contraction. This value turned out to be seven orders of magnitude less than the speed of propagation of an electric current in a copper conductor or in an electrolyte solution. From this, Helmholtz made the absolutely correct conclusion that the conduction of a nerve impulse is a more complex process than a simple longitudinal propagation of current in a nerve fiber.

And here we come to the essence of my question: what needs to be changed in the arrangement of nerve fibers in order to multiply (at least 10 times) to increase the speed of movement of the electrical impulse, while not getting any defects?

From what you said in the comments I see you want is faster information. Unfortunately ten times faster electricity will not result in ten times faster information for the brain. There are multiple parts that reduce the speed of information. The synaptic terminals, the stimulation of the neuron, the refractory period and neural structures. I'll mostly use Zimbardo, P.G., Weber, A.L., Johnson, R.L. (2006) "Psychologie een inleiding", the Dutch version of "An introduction to Psychology", the pages 45 to 54. The electricity is the fastest part and least in need of improving.

How a neuron works 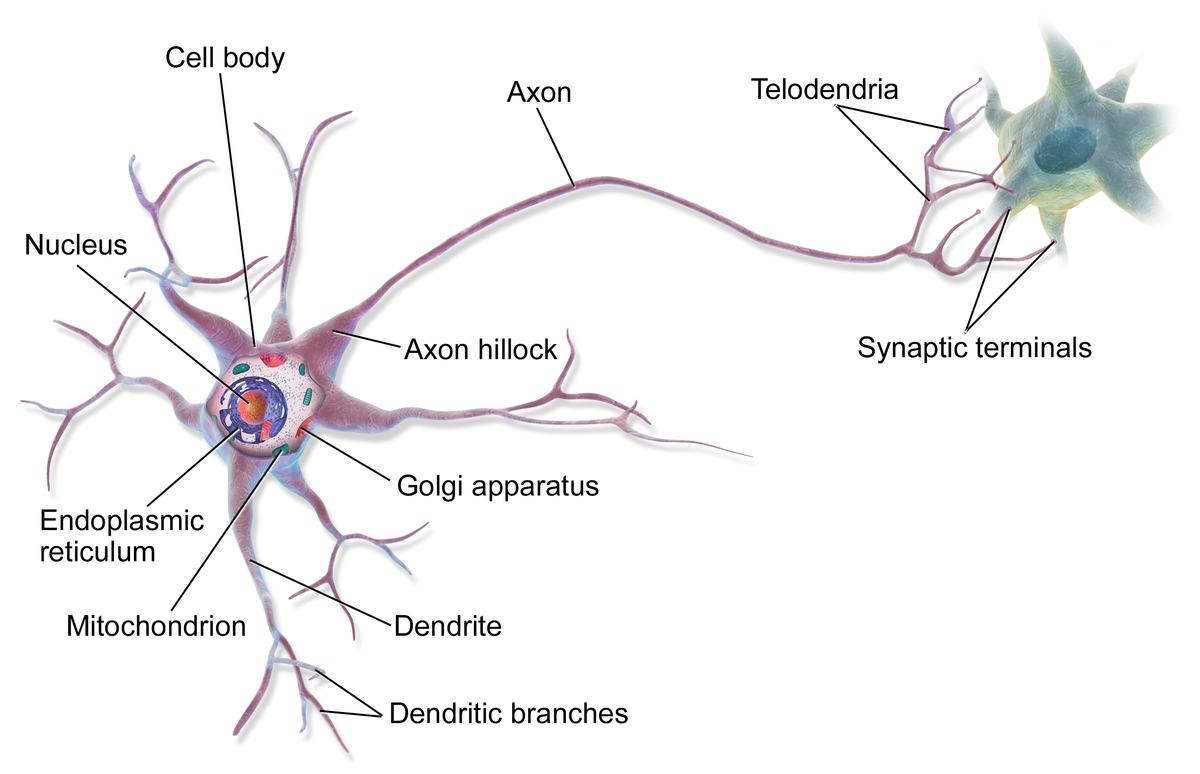 A neuron sends a signal down it's axon. It branches out at the end, connecting to the next neurons. Although it can make multiple connections to the same neuron as in the picture, it most often connects to others as well. The electrical signal is now 'translated' to chemical signals at the synaptic terminals, which travel the cleft between the cells. It is then received on the other side called the dendrites, which excite the cell. If it is excited enough, it'll send another electrical signal down it's axon.

The synaptic terminal is chemical in nature. There are electrical ones, but they can only send simple information. The chemical ones are obviously slower than electrical signals, taking about 0,5ms for transfer [citation needed]. The signal is also modulated by the chemicals used. Multiple chemicals are released, but the receiving synapse has receptors in certain amounts to be stimulated. This can modulate the stimuli between different connections.

Stimulation of the neuron and the refractory period

When you stimulate a neuron, it'll start letting Na+ into the cell. There is also K+ in the membrane, but that will also start going out the cell. If a certain threshold is reached, the cell will flood with Na+ much faster than K+ can leave, positively polarising the cell. This results in the electrical signal. Right after the electrical signal is fired, the cell can't send another signal. This is the refractory period. [Roediger et. all, (2004) 'Psychologie een inleiding']. For one to two ms, the cell will not fire even if the cell still could, and it'll be reset all the chemicals in the right way for the next signal.

To reach the threshold to fire, most often multiple stimuli are needed. Also, the intensity of the signal is cell dependent, not stimuli dependent. Together with the modulation of the stimuli, the cells react differently do each other, adding more depth to the information.

Information is more than just the signal. It is a combination of signals and neural structures. Lets take the occipital lobe as an example.

With seeing objects, different parts of the lobe are activated. Seeing a keyboard will light up a few, seeing a face will activate others. This combination is important, as different things are identified this way. However, if I look into a mirror next to my twin, I can still see differences even though mostly the same structures are activated. That is because a signal is never a single electrical pulse, but a combination of pulses. Much like a phone vibrating can tell you if you received a text message or a phone call.

One signal isn't a signal

Neurons will fire once in a while regardless of anything else. They need to be reset once in a while, which is done by firing. That is why a single signal is never a signal. This does cause a refractory period and thus might slow down the nerves. One could look at electric eels, as I once read they had some cells that could store it for longer periods and release all at once for the electrical attack, but I don't have a citation ready. It might be worth your own research.

A faster nerve cell might seem like a good idea, but it'll likely not net you much improvement. It is like relay race where you replace the fast sportsman with Olympic medal winners, while letting the never sported in their life people alone. You'll get some improvement, but the real improvement would be improving the others.

That being said you would magically enhance the speed ten times, we would likely not function properly. Many more signals than normal would arrive during refraction periods and the real time wasters are still there. It'll likely not be as bad when nervous systems are grown with this speed, but the improvement will simply not be impressive.

This doesn't answer your question, but helps you narrow further questions. Which would be something like "How can I improve the speed of the synaptic cleft" and "How can I reduce the refractory period of the nerve cell". Problems arise for the stimulation part, as multiple stimulation provides information. These can be great starting points for your own research too, as you can find a lot through Google Scholar these days, as an example. Especially for hard science I would say each requires their own questions.

Do keep in mind that a lot of the slowness of synapses for example does have it's merits. Modulation of the synapses can help in the selecting of certain stimuli, like how if you're hungry you'll respond more to food related stimuli. This is done in part by re-uptake inhibitors and the like, making certain chemicals in the synaptic cleft able to do their work longer or shorter, resulting in different amounts of stimulation.

Not the answer you're looking for? Browse other questions tagged biology creature-design hard-science or ask your own question.

10
What is the plausibility of a sentient starfish-like creature?
11
How to get monsters with literal nerves of steel?
4
Is it possible to augment the human body's muscles or nerves to simulate weight and force?
2
How should the eyes be arranged adapted for astronomical observations?
4
What needs to be changed in the structure of the human body to be able to drink salt water and at the same time conserve water like camels?
2
How should the respiratory system of a person adapted to high-mountain conditions be arranged?
0
How should the human body be arranged, adapted to the lethal level of radiation?
2
What should the teeth and jaw gape of my hypercarnivore humanoid species be like?