Creating the weight for my weapons in my MMORPG

I'm having a tough time coming up with good weights for my weapons to allow me to calculate what swords would take longer to swing, for example.

Here is what I have come up with so far:

I can't think of any other weapons which offer a different fighting style, but don't step away from the classic fighting experience. My game is an Fantasy MMORPG, but a very small portion is PVP. It kinda follows Sword Art Online (the anime), with it's atmosphere, architecture and weapons, but the gameplay itself is nothing like it. I don't want too many weapons as there will be many materials used to craft these weapons which would affect the weight and benefits, but if there is a clear option which you think I should add, please do let me know of course.

I just need these weights as a base starting point, and then I can adjust the weight/speed and damage depending on the fictional material used to make the weapon.

I had absolutely no idea what to do with the bow(s), ideally I want 2 different types of bows to allow for a more ranged gameplay (pun unintended( but I don't think they are that different irl, so I might just stick with the normal bow.

Thanks for your input!

I will speak in broader terms, including carrying capacity into the question. Indeed, the two are closely related, and in the end, it's more about the number of items one can hold than the exact weight one item is. But I will getty to that point later.

What I fear is that you're reversing priorities between core gameplay features and feelings vs flavor. You should focus first on strengths and weaknesses of your weapons, speaking in terms of number of hits to kill, range, speed, special abilities, and feeling they should provide, then to the weapon's weight. Since people cannot carry the sword themselves, weight cannot be felt, and therefore it should be laid out on the background after what they can see, hear or sense (with the controller's vibration). Feeling is more important than a number on the item's description.

It goes into the overall look and feel of your game and the intentions you want to give. If this is a heroic fantasy game, boost up weapons's size and weight as your characters are strong, sweaty heroes, not your average farming Joe. If your avatar is living in a dark, realistic world or are weak compared to monsters, decrease them instead to make them look more frail and inefficient against what's to come. It all goes down to the intention of your game.

Recall that the intentions should be thought on the whole team level, especially the artists since they will draw how characters and weapons will look like. Marking all your weapons as light and then noticing all artists drew bulky heroes wielding 5 meter swords will make you feel you lost time :). That's the game designer's job to ensure everyone is on the same page.

The idea is to not focus on the sole weight, but think it as a whole. For instance, how scarce or plentiful the drops are? Do players can acquire equipment only through crafting (gaining materials from dungeons/jobs). Do you want your players make constant conscious choices over what to keep (Very important if you have lots of single use items or a durability system), or do you want them to be more carefree and grab everything they can find, hack-and-slash style? This, in overall, will determine how much items one should be expected to hold.

Often times, you will notice that melee warrior characters will have more carrying capacity than mages or rangers, yet they can carry about the same amount of their class's items because their equipments weigh more. It's partially because if they can carry more, they may become some drop mules which is rarely wanted. However you still want some difference in feelings (as per the first section). Hence, adapt weights to how many items should one be able to carry!

If your game is following a free-to-play model, you'll probably be influenced by the editor/producer, asking you to restrict how many one can carry items, in order to sell interesting bonus inventory packs.

This can be annoying as it brings down your creativity, but sadly, a person can't eat their own bytes of virtual bread from their games. You should take it into consideration and reduce voluntarily the carrying capacity or increase your item's weight in order to incite the buying of such packs. Still, as you are responsible of the quality of the player's feelings, don't overdo it and don't hesitate to tell that it isn't possible without hurting too much the player retention on the long term. Then, in order to not reach a dead end, try to offer an alternative you can more easily negotiate on.

This is a kinda all around solution to all game designers issues, but it works, and really well actually. If your game is not yet in a playable stage, you can make a paper version of your game focusing on drops and weights. For instance, make a fake run through dungeons, and ask which item your testers want to keep, following your set weight rules. Then take their feedbacks and feelings about what you have made.

If you don't have anybody available, prepare some tables and play with values around for an estimated game run, and get others' quick feedback (it's always important). It's not as valuable as playtesting, but it formalize things and can give others a rough idea of what to expect, improving their own image of what the game would be.

But most of all, keep things simple and focus on gameplay

Unless your game has one of its pillar be inventory and drop management A.K.A. survival games or simulation games (which, given your description doesn't seem to be the case), you shouldn't spend too much time estimating exact weight/and or size of real world counterpart.

Players tend to overestimate the weight of items and even more one's real carrying capacity. Peck, have you seen someone wearing 4 plate armors, 3 bows, 6 (unbroken) potions, 6 swords, spears and shields, a quiver containing 150 arrows and a pouch holding 20 000 gold coins? And yet in games, unless you put visual indicators like in Death Stranding, almost nobody will think about it. At worst they will give a smile thinking about their character carrying this much, which isn't even a bad thing! What I mean is that it goes all into the suspension of disbelief. And you can safely retreat behind it, especially since you won't have a lot of time designing your MMO.

Yes, you probably won't have a lot of time. Remember, MMOs are one of the most expensive type of game projects in the industry (networking alone multiplies at least by 2 the cost), so you will have a lot of matters to attend to. And since your game involves even a little bit of PvP, you will need some time as a game designer to balance character archetypes and powers. Time that doesn't involve weight calculation unless it impacts the battle gameplay, in which case simulation may not be better than pure-gameplay values. After all, players are more concerned about a balanced experience than that a real viking sword weighs less than 1 kg and in your game it's 5 kg.

The physical weight of a traditional longbow is somewhere in the two to the four-pound range while a traditional recurve bow is between two and five pounds. 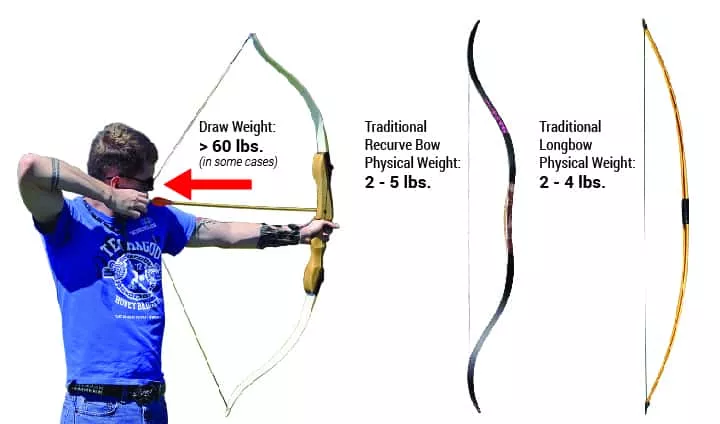 That link goes into all sorts of discussions on bow weight, eg attachments and such - I didn't know that heavier bows prevent fatigue from the vibration, for example.

For a game, keep it simple.

Especially if PVP is not a big part of your game. You can have attack speed and damage, and ranged or no. Simple variables.

If you want more variety in weapon types (to excite your players!) go ahead and have it, but ultimately it will be the same variables to consider when you have a fight. For example a war hammer might be even slower than a longsword and do even more damage. A dagger faster than a sword and less damage.

3
The Palm Buckler (Blocking With Anterior Arm)
11
What would be the best fighting styles for a humanoid with a low center of gravity?
39
How to realistically create a bow that's also two one-handed swords?
4
How feasible would this weapon design be in the medieval era?
1
How to make a slow but powerful futuristic bow and arrow
8
Could a mass-proportional physical speed limit on projectiles “nerf” guns but not ruin archery?
3
What would be the strongest “realistic” bow draw weight with ubertech?
15
Metal or alloy for special sword
7
Could medieval technology/materials take advantage of superhuman strength for muscle-powered weaponry?