Can people living in the Medieval age put anything into orbit? if this question is too difficult then what about setting altitude records with man-made object in the stratosphere?

It's hard to get to orbit because you have to go so fast.

What we call an 'orbit' is a fancy word for falling without hitting the Earth. Basically you fly horizontal to the Earth so blisteringly fast that you fall around the Earth. This is about 8km/s for Earth (in Low Earth Orbit), that's 28800km/h or about 17400miles/h.

Building a hot air balloon is technically possible for a Medieval person, but even if the balloon could take you to space (it can't) you won't get into orbit with Medieval technology.

If you want altitude, a hot air balloon is your best bet. If your medieval types are a bit more advanced they can build a hydrogen airship, which would be flammable. Or you can try a gunpowder rocket, but I think it unlikely that a Medieval person could build one large enough to lift someone safely.

Jerry Pournelle wrote a novel "King David's Spaceship" about a lower tech world scratching together a spaceship launch in order to get better terms when added to a space Empire as a 'space faring nation'. This was a case of tech lost due to wars rather than true medieval, but it has similar aspects you can learn from.

I don't think you could do it in the Medieval Age, but all the resources I've read seem to say that Jules Verne's idea actually has some merit for putting things into orbit. Just don't try to send people, as the g-forces would be a bit too much. By "a bit too much", I mean "something like 22,000 g".

The basic premise is a giant cast iron cannon buried in the ground (300 meters long or so), charged with literally hundreds of tons of propellant. Verne proposes using nitrocellulose rather than "gunpowder" (I believe this would be smokeless powder, which is more powerful than black powder if I recall correctly). I don't know how far these chemicals are beyond medieval technology, but I'm sure black powder would at least impart a lot of thrust, even if it's not enough for orbit.

Could a medieval society dig a 300 meter deep hole? Could they build a 300 meter cast iron tube? Do they have enough iron? Could they make hundreds of tons of explosive? I don't know these things, but it could at least seem plausible in a fictional story.

If your civilization knows gunpowder, they can create a solid fuel busters powerfull enough to accelerate something to enter orbit. But your civilization needs a good knowledge of Mathematics, Mechanics and Chemistry to achieve this. At least at Kerbal Space Program you can send spaceship to orbit using only solid fuel boosters.

UPD: for staging you can use visco fuse

UPD2: For control you can use slave powered wings, gyroscopes, slave powered nozzles that emmit byproducts of combustion of powder to aim the ship 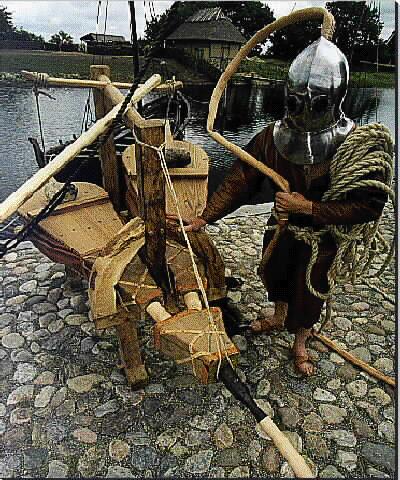 But, i think this expedition was a one way, because on medieval level of technology it is near impossible to create heat resistant materials to survive atmospheric re-entry (unless the Mithril is existent on planet of your civilization :-) ).

Not the answer you're looking for? Browse other questions tagged science-based technology medieval orbital-mechanics or ask your own question.

9
Would a destroyed orbital body's orbit decay?
12
Two planets in a stable horseshoe orbit?
5
How can a world have permanent dense fog?
18
How short can Milankovitch Cycles be on a world with a stable orbit?
8
Satellite salvaging: safely de-orbit and retrieve spacecraft or other objects
4
Describing a planet on a comet like orbit
8
How much can you learn about a planet while in its orbit?
14
Medieval flying castle propulsion
2
Possibly of achieving prolonged immortality