On Earth, at least in the United States, most marine science vessels are decommissioned Navy vessels. After all, it is far cheaper to reuse an old ship than to build a new one. The high weight capacity and large space on Navy ships allow scientists to create amazing machines capable of lifting multi-ton submarines. However, it also offers no incentive for small, lightweight designs. In other words, a big ship creates big machines, a small ship would create small machines.

So, on a world with little military influence, would the scientific machines be smaller and lighter?

Edit: This question is asking about the plausibility of technology development, so I think this fits for Worldbuilding, correct me if I'm wrong though

Depends what the country prioritizes

Contemporary research ships come in all sizes. According to Wikipedia, many Liberty ships were converted for non-military duties after WWII, and Liberty ships were fairly big and clunky. However, those were cargo ships (as pointed out in comments) and I can't find large-scale examples of combat ships being converted to civilian research use. The Office of Naval Research shows plans for custom research ships in the post-war period. I see many examples of modern purpose-built research vessels. For example, the CCGS Frederick G. Creed is the kind of small and sleek ship you describe. 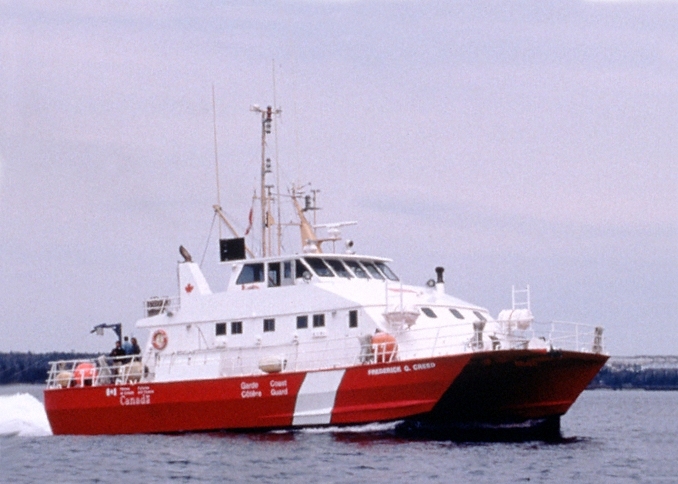 The real answer comes down to how much a given nation prioritizes scientific discovery. If science is a top priority, the country will put its energies into building the best research vessels for the given task. If a country relegates science to second-class status behind its military, then scientists will have to accept whatever is left over from the military.

In the real world, the armed forces and scientists have a complex relationship that's hard to describe in a short answer.

Depends on the mission.

Going from another angle: Mighty militaries means a mighty need of those militaries. And despite the horrors of war it is a major driving factor in scientific progression.

WWII (and by extention WWI) have produced much of our modern technology or improved it to consumer useability. Radio's, combustion engine's, rubber synthesis and even the fact that commercial airliners exist started because after the war there were many factories with the layout and technical know-how to build aircraft but no government to sell them to, so they started repurposing their airframes for commercial shipping and person transport.

When it comes to naval strategy it's about build strategy: How many and what type of boats can you make and where is the likely combat going to take place? So being able to build faster, lighter ships while still retaining armor is a necessity. If your military hasn't had a need to do that then I would suspect that the boat technology these scientists are relying on is going to be limited as well. After all if there's no billion-dollar business working on improving boats then the scientists are going to need to find the funding for it themselves.

The design (or selection) of a research ship is dictated largely by it's expected mission: where it is to operate. When you see research institutes operating a larger ex military ship, it means that they have more gear to carry, and will be operating that ship in all weather conditions. In a storm on the ocean, smaller is definitely not better. Smaller can get you killed in a storm.

Larger, on the other hand, costs a lot more to operate, and a ship's operating expenses can exceed it's purchase price within a few years. So if a research institute was researching coral growth, they'd get a smaller shallow hull coastal vessel that doesn't cost nearly as much to operate. And those are often ex military - yard patrol boats.

The design of the equipment is dictated by the mission, not the size of the ship. A deep water remotely piloted vehicle will be designed to operate for a given length of time, while withstanding the pressures that exist at the depths it will operate. Size really isn't a factor in that design... capability is.

A notable research ship, the RV Petrel is not ex-military, but is of a heavy weather open ocean design, with a huge bow to cut through large waves, a high bridge for better visibility during storms, and a deep hull to better withstand large waves that might capsize a shallow hull ship. This gives it the capability to safely operate in most any weather condition encountered. The same design is used on non military open ocean fishing vessels, open ocean tugs, and oil platform service ships, all of which need to operate in stormy conditions.

To get back to your original hypothesis: Research institutes in a nation with no active military would probably have ships similar to what is had today. They'd just spend more money acquiring those ships, as typically military ships are given to research institutes free of charge.

It may well be that in the absence of a huge military budget, research firms would get the funding to purpose build their ships. But, those ships would not necessarily be smaller and lighter than ex-military ships used today... they would be built to withstand the conditions the ship is expected to operate. Stormy weather - larger ship. Polar research - armored hull.

Or, maybe that peaceful nation would just purchase ex-military auxiliary vessels from another nation that has a navy, and some surplus ones for sale.

Finally, a surprisingly high number of ocean research projects are funded by a nation's navy, funding that would have to come from elsewhere in the absence of a navy. Military expenditures don't necessarily originate innovation, but they will accelerate it, if that invention helps them perform their mission better.

One example: When Bob Ballard went looking for the Titanic in the 1980's, he was actually contracted by the US Navy to survey the USS Thresher submarine wreck, which is also in the north Atlantic. The US Navy would prefer to keep the actual location of the Thresher wreck secret, as it does contain a (shut down) submarine nuclear reactor that an opponent might want to recover and study. Also, it's a military grave site - the crew remains are still with the wreck.

As a cover story for leaving port with underwater search gear, Ballard said he was looking for the Titanic, and to maintain that cover to foreign intelligence agencies that might be following his journey, they actually did have to go to the Titanic's estimated location and give a try. They were originally going to be on site for maybe a week before making a pass over the Thresher site, whose precise coordinates were known to the US Navy.

And, surprise - they just happened to lower their survey gear almost on top of the Titanic. Given the large search area, that was the providential needle in a haystack.

So a nation without a navy to protect it, might not fund ocean research as much.

Not the answer you're looking for? Browse other questions tagged technology earth history .

17
Which is a more effective strategic weapon/deterrent in a medieval fantasy world. A flying ship or a super gun or spellarms?
3
10 commandments to encourage development
18
How does a modern military defend against a guerrilla Army of wizards
3
How would limited and mostly narrow living space affect pre-industrial warfare?
1
Development of a multi-color writing system