Could my timberwolves exist? [closed]

In a world I'm designing, along with the Cipactlis and other strange beasts are the timberwolves. Traits of my timberwolves are: their bodies are entirely composed of twigs, leaves, and logs, they can move around, they can regenerate themselves when they are destroyed, they live in packs like real wolves, they have glowing green eyes, and give birth to live young. Given these characteristics, what species they evolved from and what evolutionary pressures led to them? 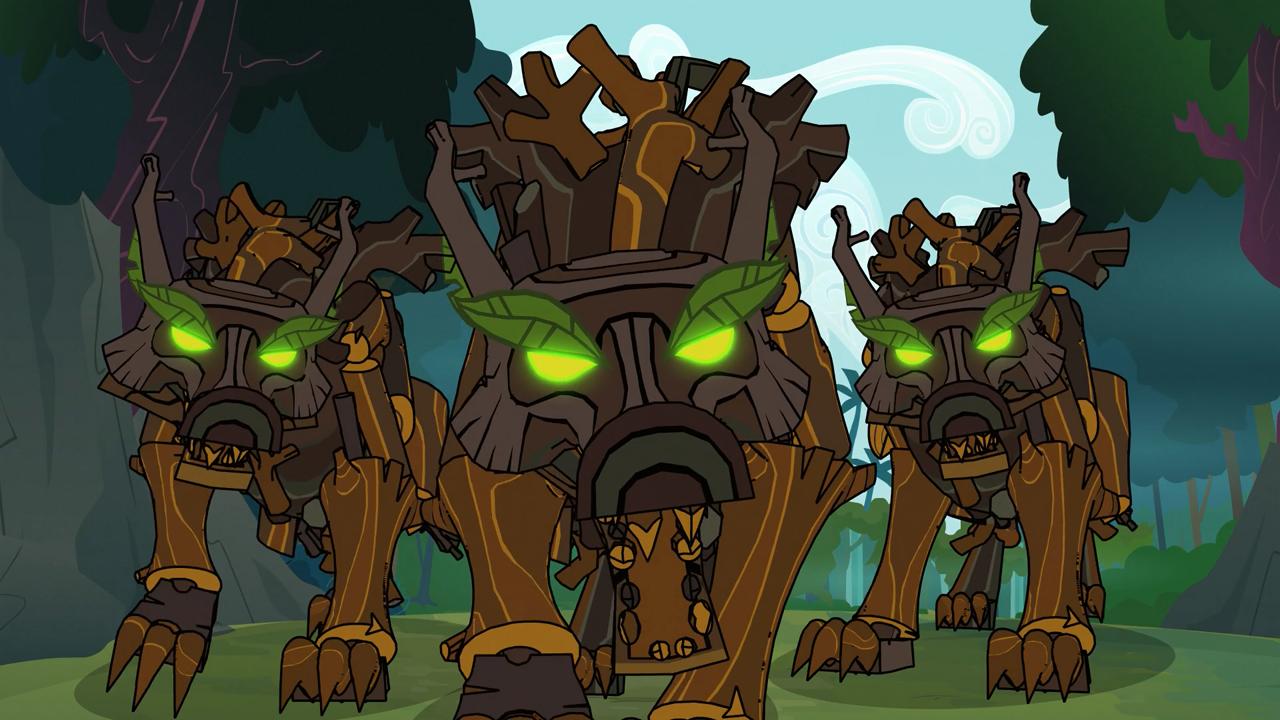 You showed us a picture of them and everything!

And in some worlds, such plantimals do indeed exist...
Judging from the shape of their eyebrows, I'd suggest that the timberwolves in the picture evolved from walnut trees. I'd also suspect that the males actually have wal nuts. But there are other species: these for example are rather lighter, a little softer and less dense than their mapleleaf & oaken cousins. But they are easy to work with, when training them up!

It's well known that timberwolves first arose during the Epithaumatic Era, a time of great upheavals in the World, a time of rapid polar shifts in not only the magnetic but also the thaumic fields of the planet. Ley lines criss-crossed haphazardly and local short circuits were commonplace. These often caused dense fountains of highly charged gnomons to erupt nearby, giving rise to novel instances of life via instantaneous evolution.

That volatile Era was, thankfully, short lived and not all such monstrosities created during that time survived in the wild lands of the World. Most, in fact, dissipated almost as soon they arose. But many other such monsters would only live on in later folklore. Some, notably the kingdom of plantimals, hit upon a stable node in the webwork of life.

It seems most likely that the timberwolves arose in an area where some sort of canid was already known and whose life force was strongly present, thus lending its shape to the new life. From then on it's convergent evolution all the way!

Short answer: No, this as it is can not exist.

bodies are entirely composed of twigs, leaves, and logs

Do you basically want predatory trees, but plants in general don't do moving around very well. The closest thing to this would be carnivorous plants and they don't actively hunt, they just stay there waiting some unfortunete insect meet its doom. Plants lack any adaptation to a mobile life-style, such as muscles (or some thing similar) and articulations.

In order to create something like that, thay would need so many adaptations that they could only be called plants as a technicality. If you really want it you can always throw magic in it and suddenly you turn a tree into a wolf-like golem, no questions asked, but have them being self-sustained biological life-forms is pretty much impossible.

However you can always have a animal that kind of looks like wolf made of timber! I would suggest a intelligent species of wolf who learned how to use tree barks as a armor, to make their eyes glow just make them noctornal hunters and throw a tapetum lucidum. I would also suggest give a way to better manipulate tools as to be capable of making their own armors instead of relying in tree barks maching their body shapes.

Not the answer you're looking for? Browse other questions tagged biology creature-design evolution mythical-creatures .

-3
Is my alternate earth possible?

5
Could these trolls exist?
4
What evolutionary pressures would lead to Trolls?
2
Could my leviathans exist?
7
Could my chameleon dragon exist?
1
Could my Bicorn exist?
5
Evolution of werewolves
0
Could my Cipactlis exist?
2
Could my Adnaps exist?