Built within an asteroid belt (near convenient resources) is a densely populated human settlement. While not a "planned city", the settlement has expanded in a organised, grid like fashion in all 6 cartesian directions. Up, Down, North, South, East, and West. Allocations of space within the city are basically rectangular prisms.

Tech is quite high - artificial gravity allows each dwelling owner to orient their space how they choose and the gravity field is confined to their dwelling. However not high tech enough that they can put their feet up. Most adults are employed, and most of them need to commute for work. People need to commute for supplies, or education, or social reasons, etc. Just like a modern city, except in 3D. Public transport is non existent. Everyone is using their own "flying car" - a personal transport rocket about 2-3m in size that is basically a car but in 3D. Can get up to 200kmhr on a straight and can do a 3G turn comfortably.

The city is overpopulated, very space constrained and densely packed. It can't afford the space to build a 6-way cloverleaf intersection every time 3 main "roads" (voids between allocated property in 3D) intersect. A 6 way stop sign definitely couldn't cope with the traffic, and waiting for 2 crossing traffics straights and 6 sets of turning groups would be a test on everyone's patience, especially if your commute requires crossing dozens of these intersections.

The largest "road" is 6 lanes high by 6 lanes wide, split in 2 directions like this diagram: 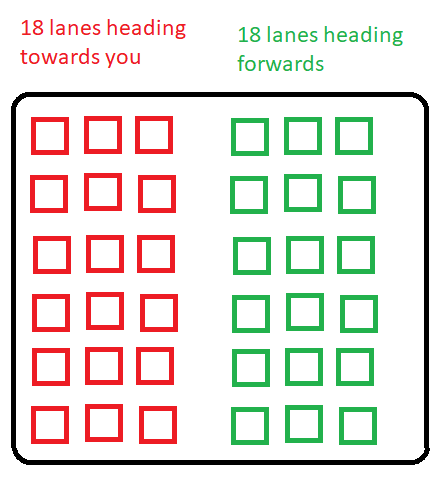 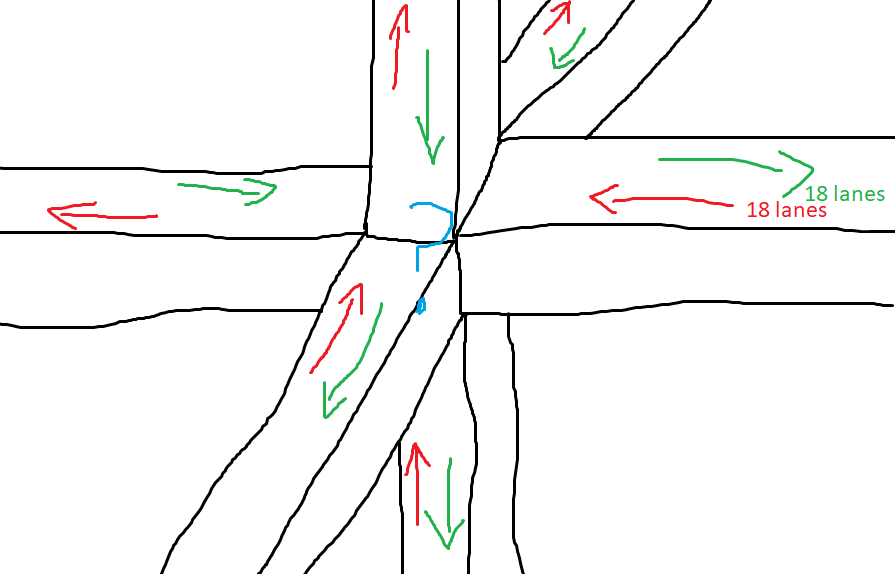 What goes under the blue question mark to allow these 108 lanes to intersect as efficiently as possible?

Scaling up 2D intersection designs to 3D just don't seem to be an optimal solution, do we prioritise X, Y, and Z seperately using traffic lights? There are 18 turns which don't require crossing incomming traffic, 12 of those are going to have to wait at any one time even though their destination is "just there" - that's going to be very frustrating.

A 3-way roundabout (3 circles in X, Y and Z, or a sphere) could just fit if they go really slow, but I'm unable to work out the rules and it doesn't seem very space efficient when the traffic gets beyond a few dozen cars per minute, and I'm hoping to get something like 4000 cars per minute through this intersection.

Adjust each cars approach speed such that you always get a clear path.

You know those action movie cliche where a car runs a red light and, despite crossing traffic, the timing is so precise that the car gets through without hitting anything? You can use a central server to allocate slots in space and time for each car. The cars are high tech - so some autopilot system can request a clearence slot a few seconds in advance, and adjust the cars approach speed so that it gets through with an acceptable safety margin.

You have a natural 6 x 6 x 6 division of space, each about 3m x 3m x 3m or whatever your lane size is, 216 cubes in total. For a 200kmhr travel speed a straight travelling car with a 3m car length cars will cross through a cube within 50ms. With a safety margin of one car length each car would need to secure an allocation of a cube for about 150ms, and have 3 locked at any one instant.

Turning needs different allocations in time and space - many curves are possible, and it could depend on what lane the car enters in. By requesting multiple allocation sets in a priority order the car could do a fast wide 3-g turn that goes through lots of the lanes when traffic is low, but do a tight slow speed corner when traffic is busy by sticking to the edges.

By extending this to the entire city you don't need to allocate 18 lanes for each direction - you can flex it based on commute flows.

To explain flow here I'm going to introduce a unit called the "cubesecond", locking one cube for exclusive use for 1 second is 1 cubesecond. The intersection is fully swamped when all 216 cubes are locked, so you have 216 cubeseconds per second in budget.

Anyways this intersection design should allow a lot of traffic from our 216 cubesecond budget:

Footnote 1: Sorry, I'm Australian; I drive on the Left, Left turns are easy for me. I can't think in left and right here especially as your system seems to imply keep-right.

On further thoughts: No public transport kinda implies minimal or ineffective government, this may mean you can't run a central server. In this case - the cars can communicate among themselves on approach to each intersection. You'd basically use a networking protocol (eg blockchain) to build mutual consensus among a network of cars on which car has access to which cube of space at any one time. 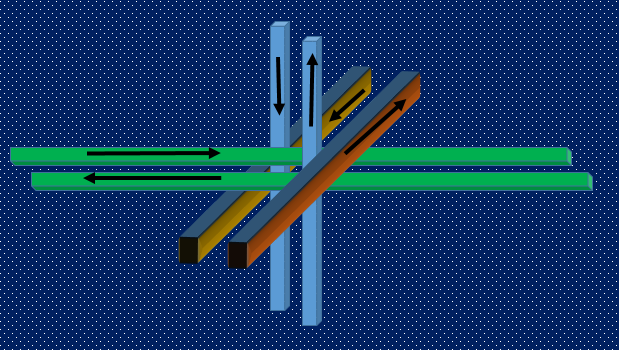 You want your paths to be like interstate highway lanes. No direction changing or maneuvering - passing slow traffic at most. If you want to change direction you need to get off the interstate and change course out of the flow of traffic.

When rocket paths going different directions get close to each other, you want everyone to stay in their lanes and predictable. In 3d they do not need to cross. When the paths are close that is not where you want people maneuvering around to change directions.

Each of these various paths will have long on ramps and off ramps set well away from other paths. It will give the rockets time to maneuver, change course, decelerate and accelerate well away from traffic.

Whilst Ash's answer is excellent when some form of automation is involved (as our current tech is leading towards already), I feel the question implies a lack of such technology.

Instead I will suggest something that every British driver is intimately familiar with, the roundabout.

In this case, all vehicles will drive in a circle until they reach their exit, at which time they leave. If you drive on the left, you go clockwise, on the right goes anti-clockwise.

"But wait," you say, "circles are 2D, what about the other two directions?" I'm glad you asked. The straight-on direction for the other two (say up and down) is straight through the middle of the roundabout.

If they want to join one of the other four directions (or someone from there wnats to join the Up/Down) they take a dedicated lane that splits off and puts them on it, much like those used in interstates/motorways.

If your city administration is on the ball, they probably know which direction pair is the "primary", and that one can be designated as the straight through route. Even if the primary route is Left/Up you can put a roundabout around the bend.

Unless you have a city of competent drivers, I suggest investing in space-buoys to mark lanes.

Do what city traffic engineers do today to solve super massive congestion problems.

You solve half your problem by reducing the intersection to just three directions of traffic and using several other nearby intersections (between one and nine) for the complementary directions.

The use of one-way streets means traffic control (or, in your case, traffic scheduling) is substantially simplified — and that's really your goal.

You explain that your space is highly constricted and therefore huge cloverleafs can't exist. I'd like to challenge that. You have cloverleafs anyway. From any one direction there are only two of the five other directions that a traveling vehicle can turn into — and even then, at 200kph you can't simply turn on a dime. You need sizeable sweeping curves to get you into those new directions. And even larger sweeping curves to get you into the other three directions (including a U-turn). Cities today inevitably refer to this messy situation as a "mix master" or "spaghetti bowl."

Since you have that problem anyway (it really can't be avoided), you might find you actually save some space by off-setting the three paths at the intersection so that they don't directly intersect at all. You're invading the space you need anyway just to transition cars into the other directions. Granted, it will use more space than the mix-master itself would require, but in for a penny, in for a pound when it comes to safety. Right?

If you want the highest possible flow, you need to split lanes and merge them together afterwards.

You have 18 lanes. Split them in 5 possible directions thats 3,6 lanes per direction. Prioritizing the straight, thats 6 lanes straight and 3 lanes in every other direction. That could be splitted like so: 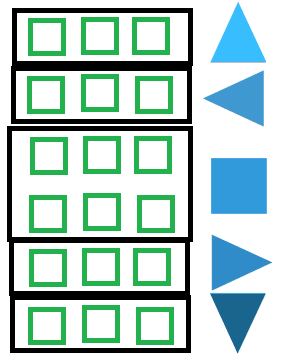 As for the interchange design, there are a lot of examples for a 6-way-interchange, designed in the game "Cities Skylines". 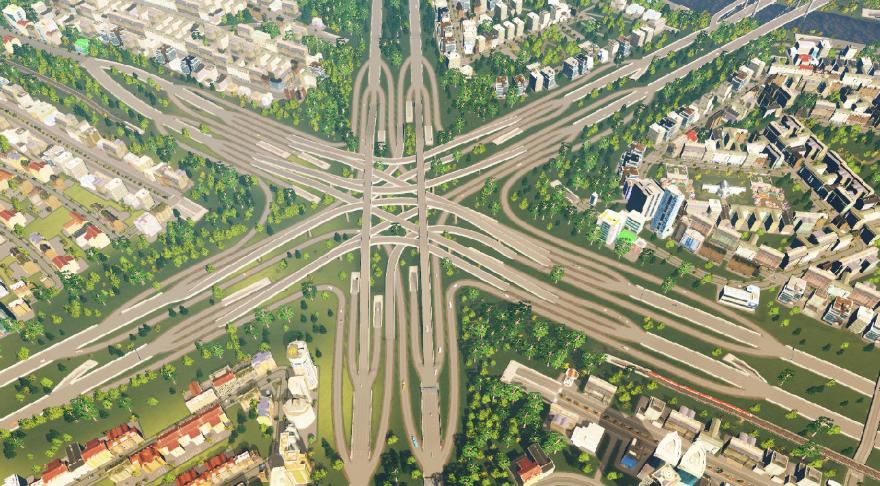 All you have to do really, is change the directions of 2 ways and you are in the 3rd dimension.

You can alter and control the flow and prioritize connections if you alter the amount of lanes per direction.

Although this is the best solution for optimized traffic flow, it requires a lot of space.

Allocations of space within the city are basically rectangular prisms

(voids between allocated property in 3D)

The largest "road" is 6 lanes high by 6 lanes wide

Would not result in 6 way supercollider intersection with "tunnels" leading to them. You would get gigantic (city wide) planes with 4-way (2D) intersection every block and much rarer 6 way intersections.

The largest roads would be 6 lanes wide and city size deep. So You would have much more room and much less traffic density than anticipated.

I would suggest that You use 4-car deep inner space for "express lanes" routed through the city, and reserve the outer-most (adjacent to structures) space for local traffic and the "cars" switching "express lanes".

For the express lanes You would have only option to flow the lane at high speed or switch to deceleration lane to join local traffic. For local traffic you would have low speed limit and more freedom to go where one please.

It is a technique I see a lot in Texas, but rarely on the United States east coast. Put a low speed side streets next to the main thoroughfares, and do a classic intersection between them. This means that people who are turning must slow down, but people going straight just keep going.

You've fallen for a classic trap. Your 6 lanes laid out side by side are a 2D design. For a 3D design, at the very least, stack them. What might be better is for each direction to have a two by two grid of lanes, for 8 total. This design also helps reduce the number of lane changes needed.

You might also consider a rail system. Like our railroads, it would be about keeping vehicles on the thoroughfare. Unlike our railroads, it would be more about guidance than support. It can make self-driving cars and computer management a much simpler proposition. If I were designing this, it would be a central hub that 3 to 6 streams of cars cluster around, using an extended rod to keep in contact with the hub. Supports for the hub would occur between lane changing zones. Local roads might just have one rail, one lane in each direction, and a stopping lane.

Not the answer you're looking for? Browse other questions tagged microgravity flying-machines or ask your own question.

9
Horizontal lane separation for flying cars?
6
How would you design Turn-Signals on a Flying Car?