Are the deserts in this continent realistically placed?

I have asked previously how I could create an earth-like world with as many deserts as possible in it. Based on the answers I got, I designed this continent, and asked for a reality-check, but the answers I got were somehow mixed,

So I took those answers into consideration and redrew my map. Namely, I moved my continent southward and repositioned some parts of it. I would like to ask if this updated version of my continent is plausible. 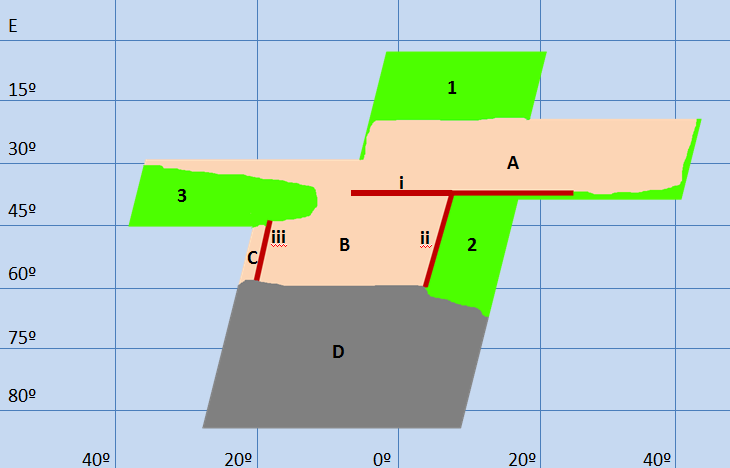 Also, to clarify, this an earth-like planet, with the same size as earth, the same duration of days and years, and similar axial tilt. Also, I higlight that this continent is located in the southern hemisphere.

(I also named my mountain ranges "i", "ii", and "iii", and my fertile regions as "1", "2", and "3"; However, the mountain ranges and fertile areas are numbered only to help guide people in their replies; I am only interested in the plausibility of the deserts)

I think your deserts will actually be more extensive than you think: 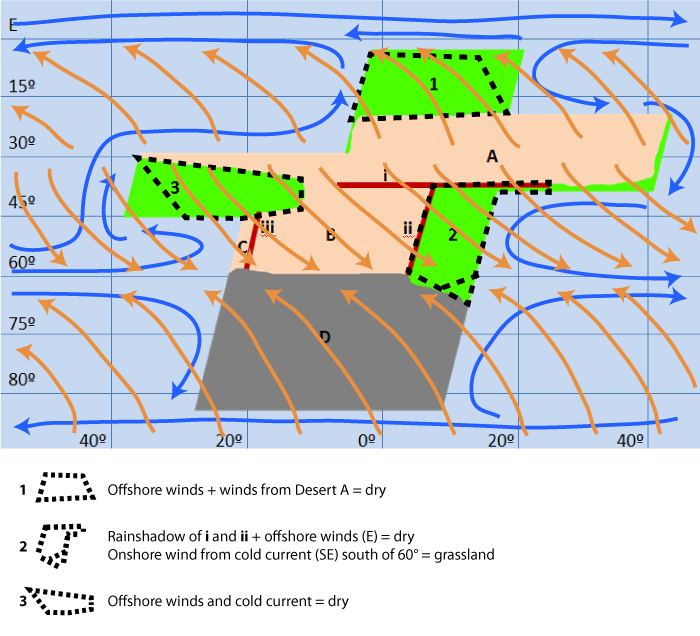 I've added ocean currents (blue) and prevailing winds (orange) to your diagram, and outlined where I think your deserts would extend in a dotted line.

There definitely is a desert for the top part of C, but in southern Chile the desert seems to end and it becomes fertile on the west of the mountains. Many of these mountains are snow capped so it may be snow melt, and the land at the bottom is split into thousands of islands, all look green and fertile.

-D. Basically Antarctica comes up to about 60 degrees south, so this is basically very very cold matching your D section. There is a fair bit of precipitation at the north. The northern bits (eg Alexander Island ) gets 684mm of precipitation per year - not a desert, that's more than my hometown. So I'd expect a lot of snowfall south of C for a few degrees. But otherwise D is mostly cold dry wasteland yes.

Not the answer you're looking for? Browse other questions tagged reality-check weather deserts .

9
Are my deserts accurately positioned?
11
Resources for Climate World building

3
What would be the major weather patterns on this map?
7
How would a large arctic mountain range affect the weather?
0
How to create an earth-like world that's largely desert?
9
Are my deserts accurately positioned?
9
Rocky desert or Sand desert - Which would appear in this scenario?
7
How to hinder the development of sea travel until the industrial age?
4
Would large enough equatorial continent produce a central desert through sheer size?
7
Can I eliminate a dry continental high pressure spot inland by adding a huge body of water in the middle of it?
3
Is my large tropical continent too dry or not dry enough?