How Can a Mammal Be Green and Blue? (No Camo, Please!) 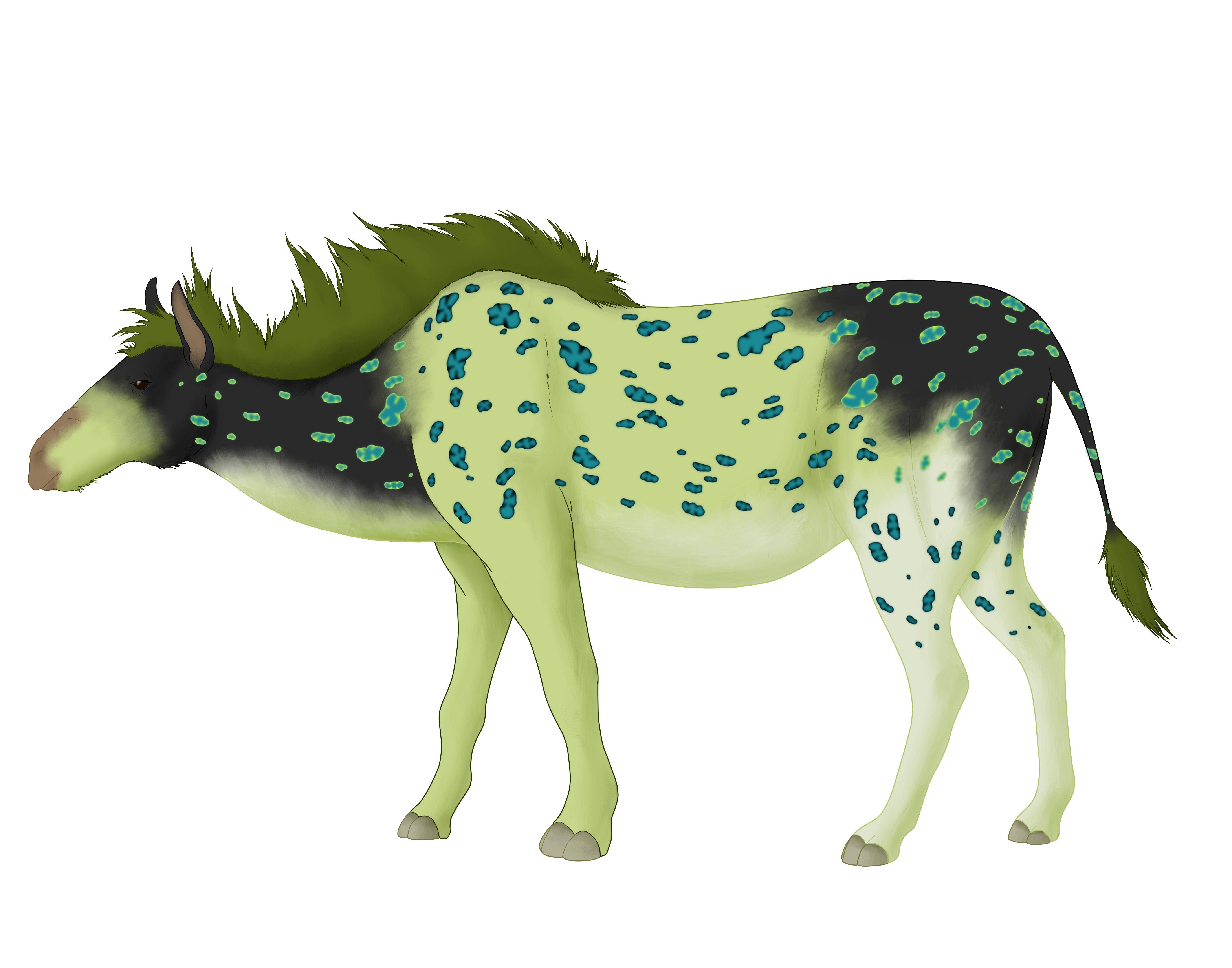 This picture is of a horselike mammal drawn for an alternate Earth project that I've been working and reworking on for years. The drawing itself--and the coloring--was done by the DeviantArtist "Ohawhewhe". This creature is brightly colored as a result of "aposomatic aggression", the same reason that Norwegian lemmings and honey badgers are colored so conspicuously.

Now, it's been brought up as to how it got to be so blue and green, which I must confess I haven't found an answer to, since blue is rare in nature and green is even rarer in Mammalia. So outside of camouflage or algae, how CAN a mammal have those colors? 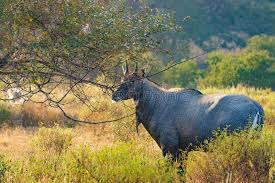 Yes, there is already a mammal that is known for being blue. Nilgai is actually an antelope that is native to the Indian subcontinent.

They are not exactly the color blue that you are looking for but adult males have a bluish-grey coat.

Now, I am not too much aware of the biology of these, if you find out how the Nilgai gets its bluish-grey coat, you may get closer to your answer.

Things with hair and fur tend to be shades of white, yellow, brown, red, and black. My guess is that all creatures of hair and fur have but the two pigments: eumelanin and pheomelanin.

Birds, on the other hand, don't have that problem. (Image of the Green Jay courtesy AllAboutBirds.com.) 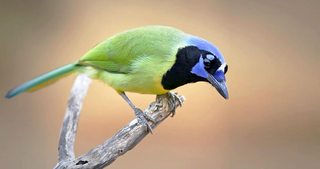 It's perhaps plausible that your creature evolved from Sinosauropteryx, a dinosaur thought to enjoy the earliest evolution of features. But, rather than developing wings and claws, it developed four hooves - but retained the feathers.

Frankly, watching happy sparrows outside in nearly 0 degree weather, I can easily believe that fur and hair is not a necessity for animals.

An alternative, based on my answer to "How would a humanoid naturally grow green hair?" is to simply allow for a third pigment, which I joyfully named for the author of that question, Jordalanin.

Sloths have a symbiotic relationship with algae, this often gives them a strong green tinge in their fur. In their case it's used for additional camouflage, their predators are harpy eagles that have colour vision.

However you can follow this path down the full range of colours available from algae which includes some strong shades of turquoise edging towards blue.

Colours in plants, animals and algae largely come down to pigmentation. Plants are "green" because of (one type of) chlorophyll, but they also have red and yellow pigments that can be seen in the Fall, as the leaves change colours.

Pigments also show up in animals. Mammalian hair & skin colouration is a matter of pigmentation. Bird feathers are coloured also because of pigments. I choose to focus on birds because their feathers have colours that you want in your beastie.

Colour can either derive from light reflection from a coloured pigment or refraction giving a colour that doesn't actually come from the pigment.

The blue could arise due to air spaces between the keratin filaments. Or it could arise from an actual pigment, like anthocyanin.

The ancestral forms of your beastie will simply have to acquire hair pigmentation along similar lines to how birds got their feather colour! 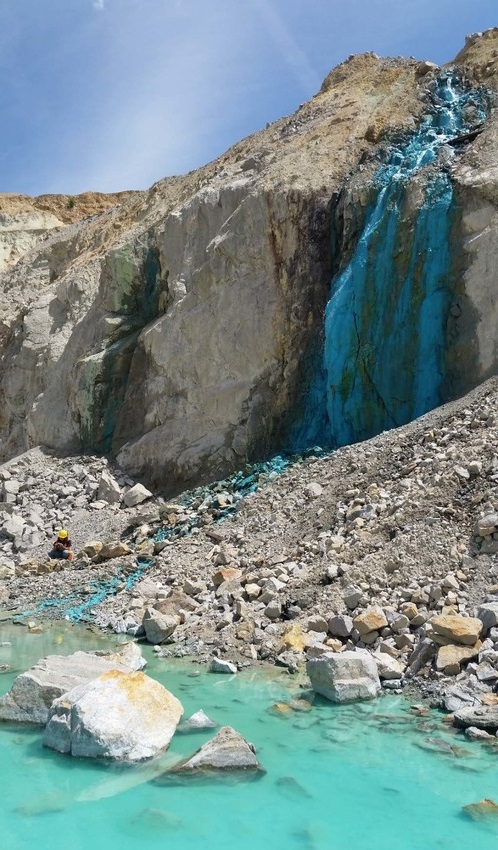 Your beast has vivid greens and blues in its coat. Copper salts are exactly these vivid hues as depicted in this spring where copper minerals come to the surface. This one is mostly blue but copper chloride is green; malachite is a naturally occurring example of copper compounds which are both blue and green.

Your animal rolls in dried deposits of copper salts from such springs, staining its coat greenish and in patches, blue. Those patches are the reason it is rolling in the copper salts. They are a fungal infection of the skin, and the moisture at those infected sites causes more copper salts to adhere there, deepening the color.

Copper is an excellent treatment for fungal infections of all kinds. Depicted, the treatment of hoof rot using a copper sulfate solution. 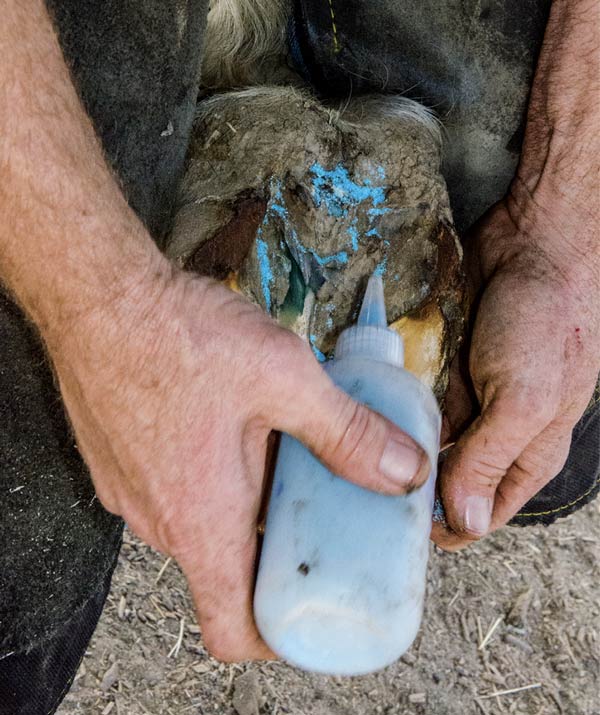 I see a question from @JohnWDailey about whether copper deposits occur naturally on the US Atlantic coast. In hopes for that green check (or maybe an upvote) I went looking. The answer is yes.

Here is pseudomalachite, a green/blue copper ore. It is from the Schuyler copper mine in Bergen country, NJ.

Here is Bergen county which by any criterion is located on the Atlantic coast. 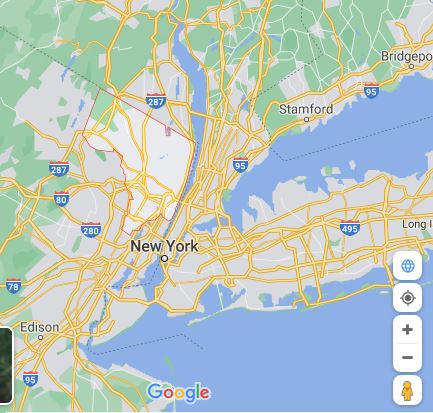 In the modern day, the mine is exhausted so if copper salts ever came to the surface there, they do no longer. But in theory if there are copper salts under the ground, water could carry them out in a spring like the one depicted above. I imagine something like this would be a clue by which persons in the early 1700s would realize there was copper ore in the area.

No, green has not developed among mammals' hair pigments. Some forms of albinism may appear blueish/light greyish, though.

Without going into the details, natural variation of feather or scale colour has green and blue in store, but not that accentuated for hairy creatures like mammals because the pigments aren't present among those.

And in reaction to some remakrs and because "science based": in principle natural evolution has NO GOAL OR PURPOSE, it just happens because of inherent variation and selection. Selection criteria for skin colour can be distracting predators (uniform colour in herds help), preferences of the other gender (scintillating), blending with the environment, or others.

In a fantasy setting it may be possible though to have green and blue. Or maybe some forms of symbiosis with blue bacteria on the skin if that counts. My suggestion would be to use sexual preferences as selection criteria for such colourful animals, because that is exactly what can happen in nature as well.

You really have only three options...

Background to the problem

Your problem all stems from one central issue: mammalian hair is dead keratinized tissue (though the follicles are alive) and the only pigments mammals are capable of expressing in them are eumelanin and pheomelanin. Eumelanin makes brown and black pigments and pheomelanin makes red and yellow ones. Most vertebrates are incapable of making blue pigment (which you also need to make green pigment because yellow + blue = green) and those that are blue or green achieve this in different ways.

The way most blue and green vertebrates achieve their coloration is through structural iridescence of the skin, scales, or feathers. This can produce a blue coloration, and combined with yellow carotenoid pigments can be used to create green. The problem with this, however, is that structural iridescence is really something mammalian hair can't do due to the way it is microstructurally organized. Blue and green coloration in birds seems to be linked to the way bird feathers develop (which is different from how mammal hair develops) and are capable of forming complex cross-linking structures, while mammal hair is relatively plain. I remember reading that it was related to how bird feathers are able to cross-link, but I'm not entirely sure and I don't have said reference in front of me. The basic gist of the argument is that feathers, scales, and skin are complex three-dimensional structures that can be microscopically shaped to form different nanoscale structure because of their three-dimensionality. Mammal hair is basically a stick of keratin jutting out of a gland and doesn't have a lot of ways it can be shaped.

An alternative would be to have the animal lose its hair and instead develop brightly colored patches of skin. This is what the only mammals with truly blue coloration (not grey-blue), primates such as mandrills, do. Because skin is living tissue it is possible to make more complex colors with bare mammalian skin than hair tissue.

A potential runner-up, but unlikely solution, is to allow the animal to get coloration from something it eats. I say unlikely because most of the time animals assimilate color from their food it tends to be red and yellow carotenoids, and most of the time those animals seem to be insectivores (at least the ones with bright colors). Notably, eating green plants would not allow an animal to assimilate the chlorophyll and become green, because chlorophyll does not survive digestion.

Another problem on top of this is that most mammals, with the exception of primates and certain marsupials, are dichromats, they cannot see the color red. As a result, the way they tend to see the world is washed out and from their perspective there isn't much difference between brown and green or blue because the red is missing. This is how many mammals can hide from other mammalian predators/prey despite being a very noticeable brown on a green backdrop: to a dichromat there is no difference between the two. This means there is likely to be very little selection for bright green and blue coloration because two of the primary drivers for color changes, sexual selection and camouflage, are not going to have any meaning. It's worth noting that the only mammals which have bright blue or green coloration are all primates, which can see in color.

This is what tree sloths do. Their hair has special grooves in it that algae grow in that make them appear green. It's thought that this makes for better camouflage against harpy eagles, which can see in color, compared to mammalian predators which cannot tell the difference between green and red-brown. This is probably the most realistic option on the list.

Not the answer you're looking for? Browse other questions tagged science-based creature-design alternate-earth mammals .

4
How would a humanoid naturally grow green hair?
-3
Biochemical plausibility of blue(-gray) fur?

1
what advantage might a blue-green laser have underwater (if any)?
8
Are pharyngeal and cutaneous breathing possible for an aquatic mammal?
7
How could a mammal develop that has long legs but lives in a semi aquatic area?
2
Can a mammal and Oviparous have child together if they have similar external body structure?
5
Could a dichromatic animal distinguish red and green but not blue?
5
Can a Mammal Develop a Jaw Shaped Like a Beak?
13
Can an insect evolve to look and function like a mammal?
7
How could a dragon develop blue fire breath?
1
How will these mammal-bugs retain their bug-like features?