I'm back with another creature-design question, and this one's a doozy. This new creature is about the size of a tulip but with a "stem" that's twice as thick. Its head and mouth are fused into a flower-like structure, and it has two false sepals extending from the sides of the neck.

Is this creature possible, and if so, what kind of creature would it be?

You are basically asking for a mix of a bobbit worm and a venus flytrap. Curiosly enough, both of them have Venus in their names...

For the bobbit worm:

Eunice aphroditois is a benthic bristle worm of warm marine waters. It lives mainly in the Atlantic Ocean, but can also be found in the Indo-Pacific. It ranges in length from less than 10 cm (4 in) to 3 m (10 ft). Its exoskeleton displays a wide range of colors, from black to purple to metallic. This species is an ambush predator; it hunts by burrowing its whole body in soft sediment on the ocean floor and waiting until its antennae detect prey. It then strikes with its sharp mouthparts. It may also be found among coral reefs. 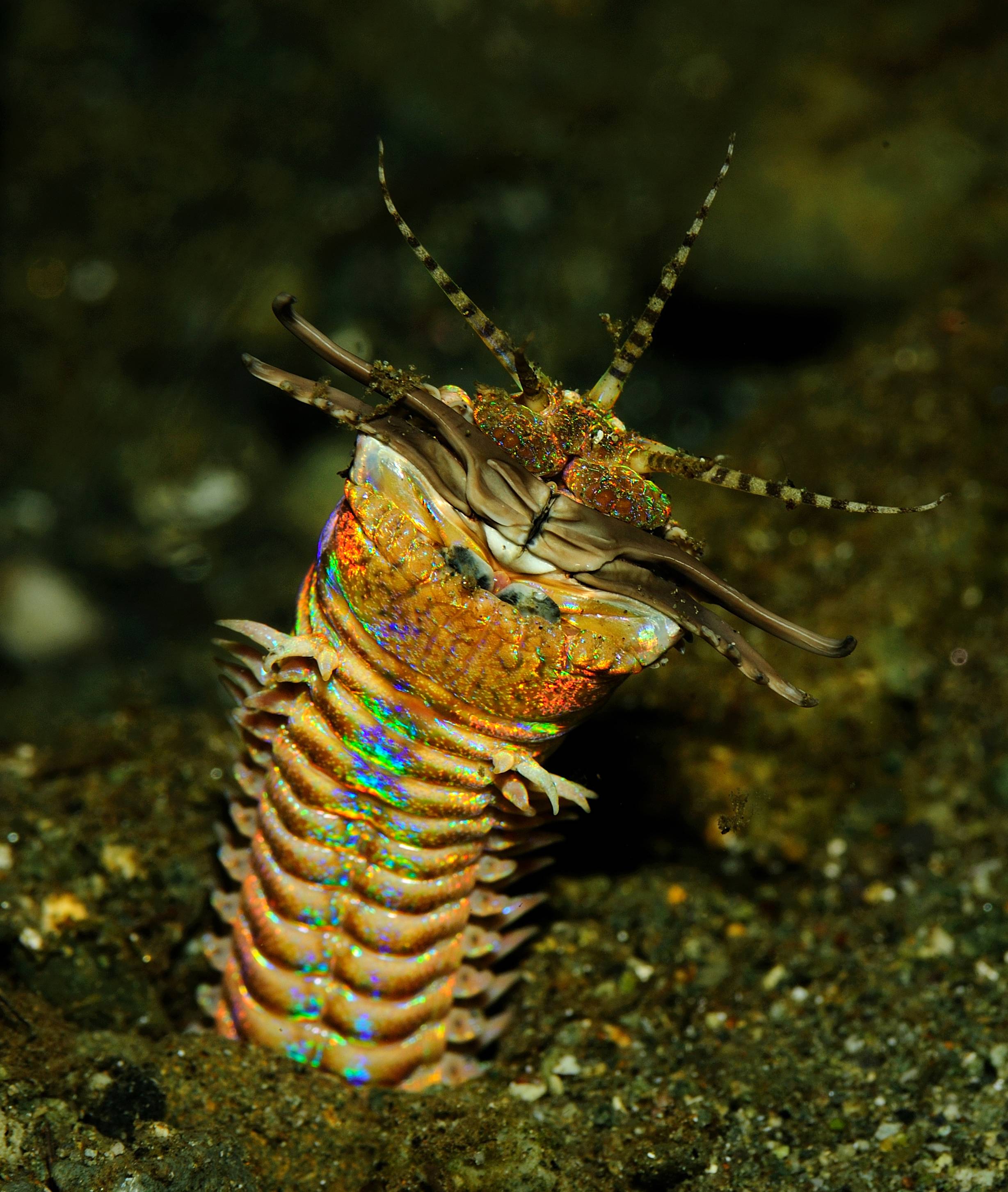 For the Venus flytrap

The Venus flytrap (Dionaea muscipula) is a carnivorous plant native to subtropical wetlands on the East Coast of the United States in North Carolina and South Carolina.3 It catches its prey—chiefly insects and arachnids—with a trapping structure formed by the terminal portion of each of the plant's leaves, which is triggered by tiny hairs (called "trigger hairs" or "sensitive hairs") on their inner surfaces.

The Venus flytrap is a small plant whose structure can be described as a rosette of four to seven leaves, which arise from a short subterranean stem that is actually a bulb-like object. Each stem reaches a maximum size of about three to ten centimeters, depending on the time of year; longer leaves with robust traps are usually formed after flowering. Flytraps that have more than seven leaves are colonies formed by rosettes that have divided beneath the ground.

The leaf blade is divided into two regions: a flat, heart-shaped photosynthesis-capable petiole, and a pair of terminal lobes hinged at the midrib, forming the trap which is the true leaf. The upper surface of these lobes contains red anthocyanin pigments and its edges secrete mucilage. The lobes exhibit rapid plant movements, snapping shut when stimulated by prey. 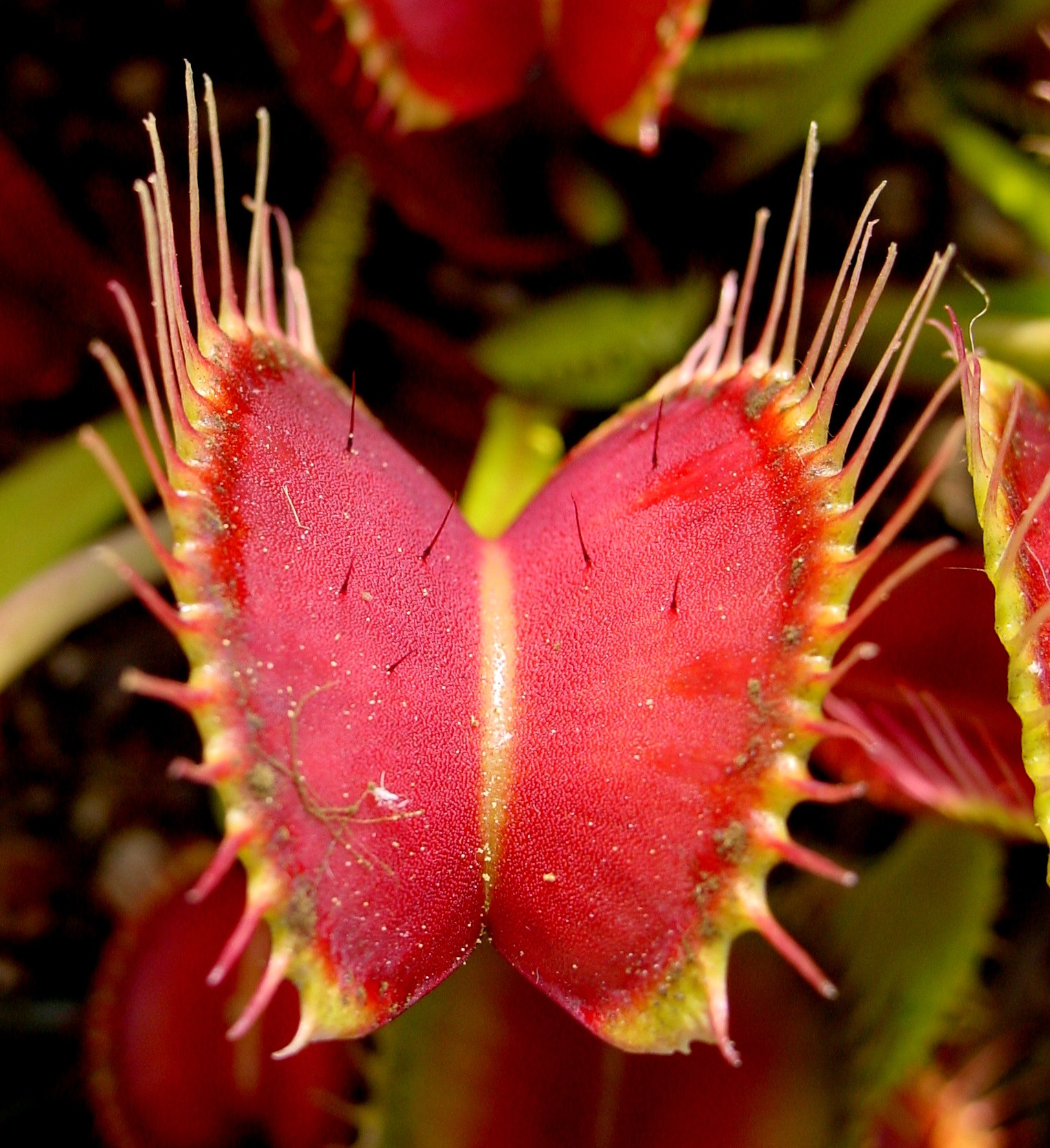 Anemones are the easiest comparison, as they're already considered somewhat flower-like, and their overarching group (including corals and jellyfish) is known for having symbiotic algae that allows them to photosynthesize. In a lot of the existing cases, the photosynthetic ones are less able to capture prey, but there's nothing preventing this from occuring if conditions favour having both methods of sustenance.

Another option would be some variety of sea slug. The Sacoglossa group are capable of photosynthesizing by keeping the chloroplasts from algae they eat intact, while some nudibranches can do something similar as a defence mechanism with the sting cells of their prey. If it's predatory, it's either omnivorous (since it needs to eat plants in order to take their chloroplasts) or dedicated to eating animals that are themselves symbiotic with algae.

Unfortunately, both of these examples are marine, so they extract nutrients for photosynthesis from the surrounding water rather than from soil. It is worth noting that most carnivorous plants aren't that effective at this either, with their nutrients coming from their prey instead.

Not the answer you're looking for? Browse other questions tagged biology creature-design mythical-creatures or ask your own question.

12
Mimics and wooden chests: chest-like monsters, or monster-like chests?
10
How to Train Your Mimic (or, why would a Mimic be capable of domestication)
22
Would a carnivorous diet be able to support a giant worm?
6
Can a machine benefit from stored heat energy?
4
Creating a Worm For Urban Survival
6
Creating a Predator For Snappers
0
Figuring Out Monster Ecology
1
Making a Predator For Wild Anklebiters
5
Explaining Monsters Shifting Form in Combat