The 'Chomping Egg' in question is an egg-shaped creature clad in a calcareous shell. It has only two limbs, and those are the tube-like legs, each of which are flexible and end in a suction cup. Its mouth is a toothless hollow inside the head, with the opening being the "teeth"-it's shaped like a natural crack in the eggshell, sort of like a lightning bolt, and the edges of this opening are essentially razor-sharp blades. It has two black eyes set in the top front side of the egg.

Inside the calcareous shell, it has a protective membrane as tough as boar hide let's say, and a gelatinous body. As it eats, it grows, causing it to molt and eat its shell. With each molt and reformation of the shell, its shell grows slightly harder. Eventually, it seals its eyes and mouth closed to form a cocoon, then emerges as a quadruped with its eyes and mouth set in the round end of the "egg".

As for reproduction and excretion, they reproduce sexually and are livebearers, and they have a "close-ended" digestive system, which means they expel waste and everything they can't digest from their mouths (think owl pellets, or perhaps sewage).

Is this creature feasible, and if not, what modifications and adaptations does it need?

And as is often the case, Nature beat you to it. Allow me to introduce the saccorhytus: 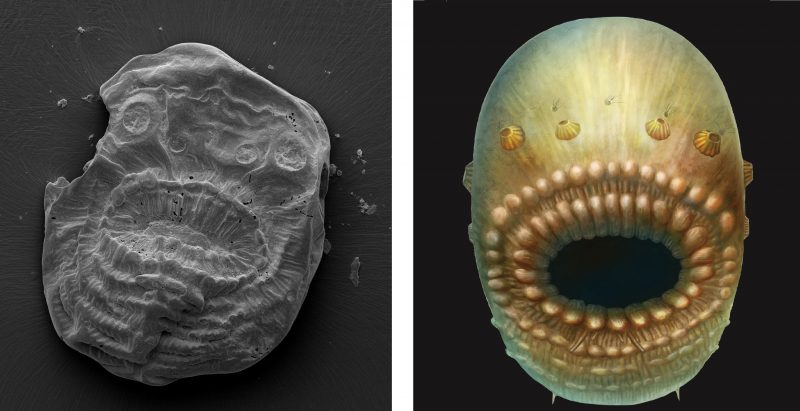 Basically exactly what you're looking for: an egg shaped animal that eats and craps from the same orifice. Everything else you describe is either aesthetics or else bits that are well explainable via ordinary evolutionary processes. For example, the "body cones" could well evolve into tube shaped legs, calcareous shells are well known in the animal kingdom, etc.

4
How Can I Protect Medieval Villages From Chompers?
2
Role of Druids in Fantasy Society
1
Would Calcification Benefit People and If So, How?

22
An animal that is physically separated into multiple parts
6
what the aquatic creature need in order to live or survive in my acid water?
5
Can the dunkleosteus jaw model work on a land predator?
1
Feasibility of Chomping Egg Evolution
2
Plausibility of Engulfer
9
Is this creature's proportional head size feasible?
1
Making a Predator For Chompers
5
Explaining Monsters Shifting Form in Combat