A recurring problem in trying to create large creatures is the square-cube law as it applies to upscaling familiar animals, particularly those with exoskeletons: if you double an animal's size, its weight will increase eight times, but its weight-bearing capacity only quadruples and muscular strength only doubles. Arthropod skeletons already account for a greater proportion of the organism's weight than those of vertebrates.

The largest arthropods in history were the Jaekelopterus and Arthropleura, both about 2.5 m long. But neither rose to more than a few tens of centimetres from the ground.

Among the usual proposed partial solutions are lowering a planet's gravity, increasing the oxygen content of the atmosphere (which allowed for much larger insects in our past), and changing the composition of the skeleton itself. Perhaps a structural solution can be added to this list to make land-based carapaced (rather than shelled) megafauna plausible.

Would a blending of exo- and endoskeletal traits, an 'ambiskeleton', work? Here is a simplified diagram of what I'm proposing: 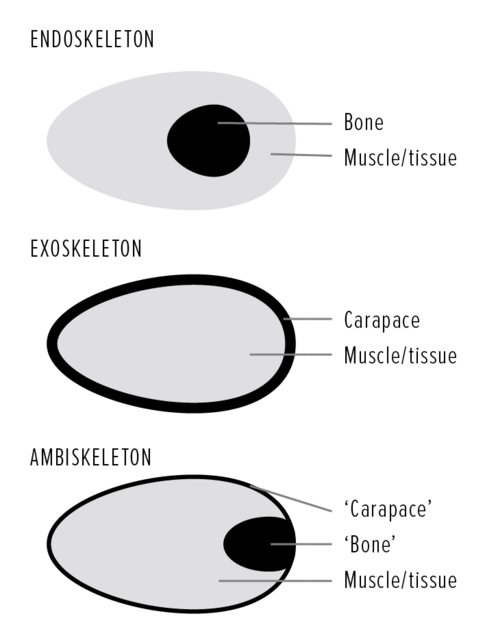 'Ambi-' from Latin meaning both.

The muscle and tissues are encased in a carapace-like shell, with load bearing handled by a bone-like structure along one edge. In this combination the 'carapace' need only contain and protect the contents of the limb or body segment, while the 'bone' bears the weight of the animal. Both portions are continuous, without intervening soft tissue.

With or without the other aforementioned partial solutions, would this allow significantly larger animals with carapaces?

Although a good question, it does not work except for aestetics which might be your point.

An exoskeleton is designed first and foremost to protect the inside. It needs to be thick enough to provide that protection, if its too thin it will act brittle and break quickly. Skin is relatively easy to repair and its elasticity combined with toughness make it useful to us, but having essentially a thin piece of bone that easily breaks and is harder to repair as your skin would mean you are easily injured and take too long to recuperate from those wounds.

If you make the exoskeleton thicker you run into a problem: it needs to be thick enough to protect but thin enough to not cause your bones to collapse under the weight. We can already crack the shell of a crab, so that thickness isnt good enough. But if you scaled up said crab to our size with a decent thickness to protect it you've already run into the square cube problem you were trying to avoid!

Although you might just go with the "it uses another composition" method. Many steps in making Graphene can be done by biological bodies and spiderthread can definitely be made by biological bodies, so having a carapace made from a Graphene skin alloy for both strength and lightweight interlaced with spidersilk for strength and flexibility you can create carapaced megafauna.

For reference, our bones are made of elastines that make the bones flexible and calcium for hardness. When we are young our bones are much more elastine and bones are hard to break, the side-effect is that your bone bends easily and does not protect as much as you want nor does it help when your muscles try to generate power from something that gives way. As we grow older elastines disappear from the bones and mostly calcium is left leading to brittle bones. So making sure you have a solid combination of elastic properties and hardness is vital for a good bone or carapace structure.

Turtles have their shells as a part of their skeleton somehow - it's made of leather keratin but the ribs are fused to it.

One extinct species called archelon could be 460 cm long (about 15 feet, I figure). Here's a picture of one's remains with a human by its side: 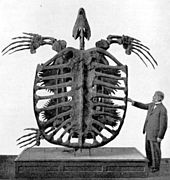 An ambiskeleton would work in theory. The joints for both the internal and external structures would have to be lined up, in order to allow mobility. And having more hard, sturdy parts would definitely increase your creature's defensive abilities, and would give it more of a chance to exist in spite of its large size.

Seems like ambiskeletons require specific features that no one living creature have, but maybe some extinct creatures could had had them, the placoderms, a clade of extinct fishes in which almost the half of their body was covered by bone plates and for what I know, the soft tissue over the plates was minimum, thing which is important for the purpose of the "ambiskeleton, which is to permit big and massive arthropod like creatures with an apparently hard exoskeletal body. 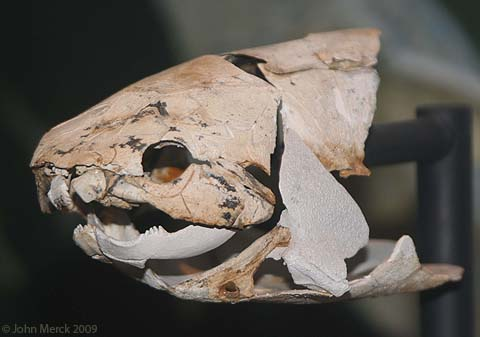 As I mentioned these creatures had very little integument on the bone pectoral and skull plates (at laest just a thin skin layer at specific parts), which would easily reveal their tough appearance. Other thing is that they had most of the organs and muscles inside the boen plates and not out or over.

Other possible point to this "model" is that placoderms even underwater could reach bigger sizes than biggest arhtropods, with one of the biggest species having moderated estimations till to 6-7 meter long and the upper estimations with even to 10-11 meters.

So to had those big sizes is a possible evidence or solution respect to the problem that size is limited by having all its organs contained within a rigid exoskeleton which I've seen is usually mentioned for giant arthropods. Basically looks placoderms could grow without be limited by its armor.

And some amazing thing, a specific group of placoderms went farther, developing arthropod like limbs from its pectoral fins. 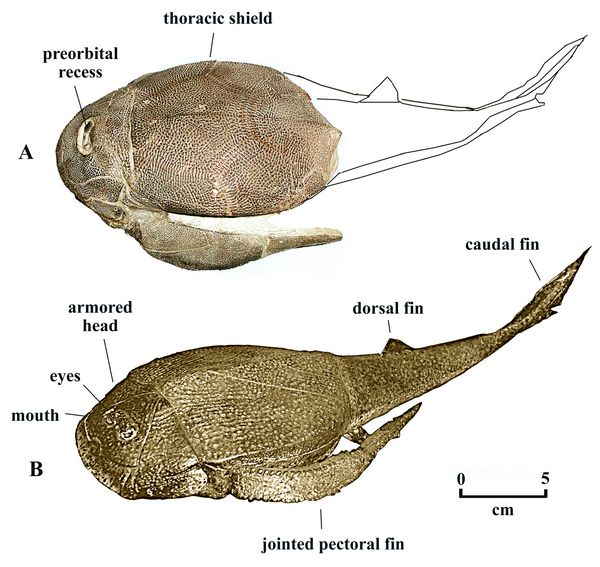 The following image is from a little size genre but others were able to reach to 2-3 meters long.

And the part which contribute to the "ambi" part is that placoderms kept a spine contained inside their armor, only connecting with their braincase, practically being an only internal muscle anchor point.

These were acuatic creatures, so the more probable case is that all extra weight provided by the armor were sustented by water, that could cause problems on land for be so heavy. So would be necesary to determine how thick it could be before reaching a limit where it falls under its own weight.

Possible solutions for this are to use strange materials, or the evolving some estructural construction able to support the weight. Like this diabolical beetle or the mantis shrimp exoskeleton.

And things that I'm really not sure of how they work, like the biological mechanism by which these animals could grow within their armor without shedding as arthropods would, I have assumed that by a stacking of layers of bone dissolving into the lower ones as they grew.

And the mechanic part, I don't know if the surface provided together by the minimum internal skeleton and exoskeleton would be enough to anchor a sufficient amount of muscle to be able to move on land. So is that, to find how much surface muscles require.

The only thing we can know is that this "model" worked satisfactorily underwater.

By my part I would try to search for solutions or make questions to solve the last incovenients.

Not the answer you're looking for? Browse other questions tagged science-based xenobiology anatomy bio-mechanics .

73
Can you simply scale up animals?
4
Is placoderm-like armor (semi-exoskeleton) viable for giant arthropods?
3
How get functional arthropod-like legs for carry great weights?

11
What are ways I could design a viable split jaw?
30
Are nuclear-propelled shotgun slugs viable?
8
Are my wing-walking griffins viable?
8
Are Extraterrestrial's pagoda trees plausible?
13
Could humanoids without a skeleton be viable?
7
Are Air-Breathing Merfolk Viable?
4
Are flexible digits viable for both running and climbing?
4
Is placoderm-like armor (semi-exoskeleton) viable for giant arthropods?
19
Are hydrocarbons viable foods for larger organisms?