In my alternate timeline, the original Atlantean civilization perished around 1,500 BCE. Around 1000 BCE, humans once again find Atlantis, this time with 10,000 Greek outcasts fleeing from persecution from their homeland, and over the course of a 1000 years, founded a empire of over 10 million people and technology far more advanced than their neighbors, equivalent to the late medieval age(1400s, gunpowder). But around the year 100 AD, the Han Dynasty of China, the Persian Parthian Empire, and the Roman Empire(ignore the impossibilities) unite in order to destroy their formidable neighbor. Now, this alliance is formidable, with a combined force of over a million and a half personnel, and 150 million people-a full 15 times the population and personnel. The alliance is preparing a huge fleet to transport 750,000 troops to Atlantis over the course of a decade, and the invasion will commence in 5 years. 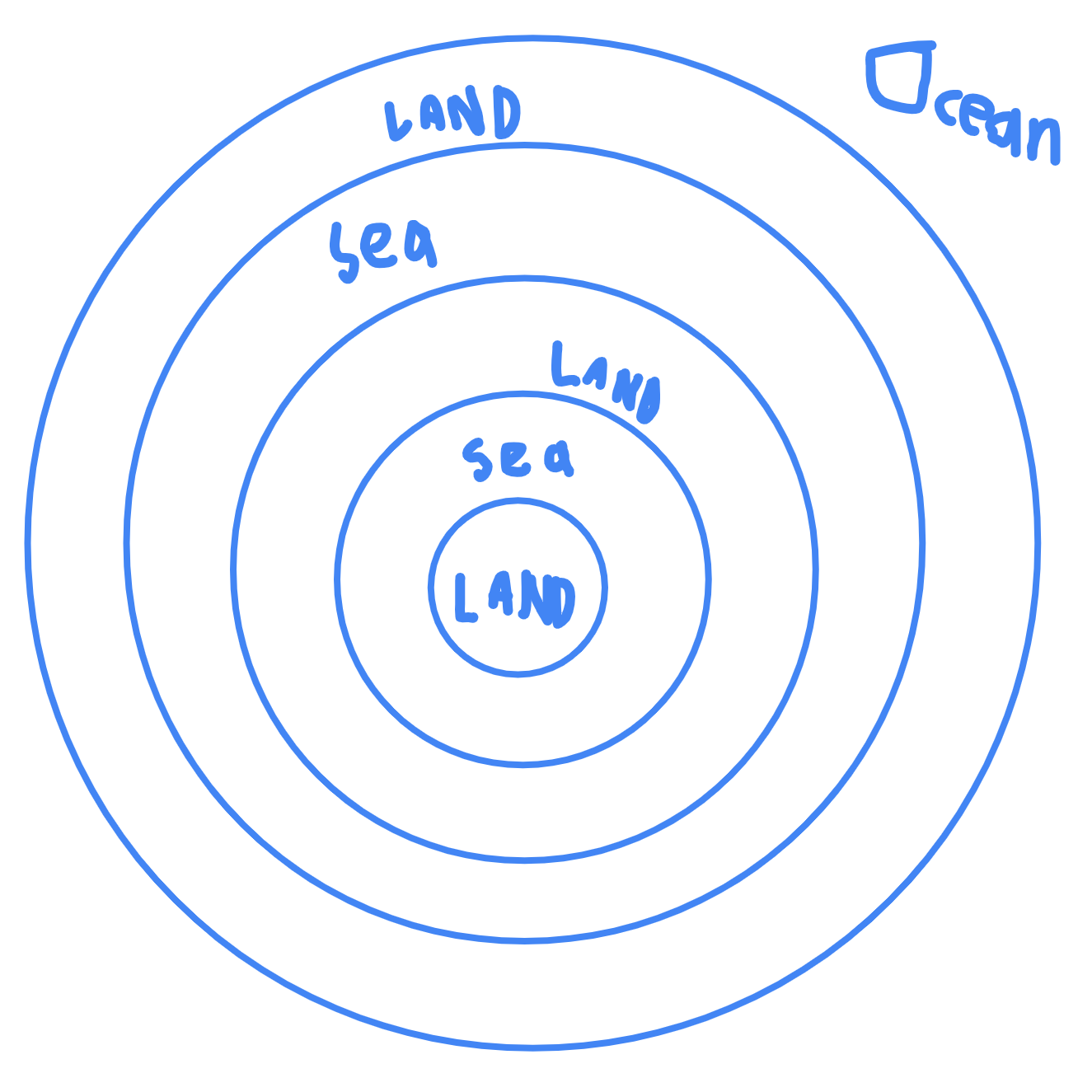 Assuming that the Neo-Atlanteans have essentially limitless resources, and can call upon 2.5 million people to work for the government, what is the best way for them to prepare a defense and beat the alliance?

Tactical & Strategic Information: The organization of the Neo-Atlantean Empire has a central city with 3 million people, the two rings each hold 3.5 million people, and there are 4 urban centers on every ring, each holding about 250,000 people. The Neo-Atlanteans have 100,000 personnel, 50% infantry, 25% calvary, and 25% ranged(arquebus). The invasion force is 90% infantry, 5% calvary, and 5% archers. The invasion force brings ballistas, battering rams, and other siege equipment. The Neo-Atlanteans have advanced trebuchets, catapults, cannons, and guns. They have a system of roads and a series of artificial bridges that crosses the inland seas.

Goal: Make the alliance invasion retreat, kill all of the invasion force, prevent the majority of the population from dying or being enslaved.

Sea wall. Artificial reef. And turn a bay into a killbox.

I can't see exact dimensions of the circumference of the outer ring but going off population sizes and gut instinct I'm guessing its about 350km around the outside / 120km in diameter. Taking out the inland seas, gives about ~2000sqm per person - plenty of room for farmland (and about three times the amount of land you'd need to feed that population)

You have 5 years and 2.5 million men to turn 349km of coastline into land unsuitable to land a boat on. 12.5 million man-years of labour. That's enough to build 87 great pyramids of Giza. You have 35 man-years of labour per meter to make a section of land unsuitable for landing. You could build a stone wall 20m high around the outer island with these levels of manpower, (rendered with cement so it's smooth and unscalable - Greeks would of had access to cement). Every km or so build a watchtower and station some archers to act as sentries, armed with fire arrows to attack any wooden ships that venture near, and raise the alarm for reinforcements.

You have calvary, blacksmithing, and gunpowder. Put them all together and invest in mobile canons - big wheels, horse drawn, and a cart for canon balls and gunpowder. Press out roads to each of the watch towers and practice summoning a division of canons to a distant watchtower at a moments notice.

With your island turned into a fortress, leave one area unwalled. I'd suggest use a natural bay with existing harbour in it - as your fishing fleet still needs to go out in those 5 years and you may have some trade.

You have blacksmithing, so you can build iron hedgehogs to place in the water to rip apart boats when they come to land. Build fortifications around the bay - allowing archers to rain hell down on anyone who makes it to the beaches. Your swords men will be inside the fortifications ready to defend any attack that makes it to the archers.

I don't think you'll be able to build sea mines (trigger mechanism and keeping the gunpowder dry might be too hard). But if I'm wrong - do that.

However you can totally build an artificial reef - build ~2x2x2m cubes of wood, (ballast them with rocks so they don't ride too high in the water), tow them out to sea in front of your bay, and then let water in, allowing them to sink. Top them with razor sharp rocks for extra effect. You have so much labour at your disposal you should be able to make a maze of a reef.

As the enemy ships get stuck and sink on the reef, the reef will actually change, making it harder and harder for the subsequent waves to navigate the maze, however in between waves this reef should be extended if possible. 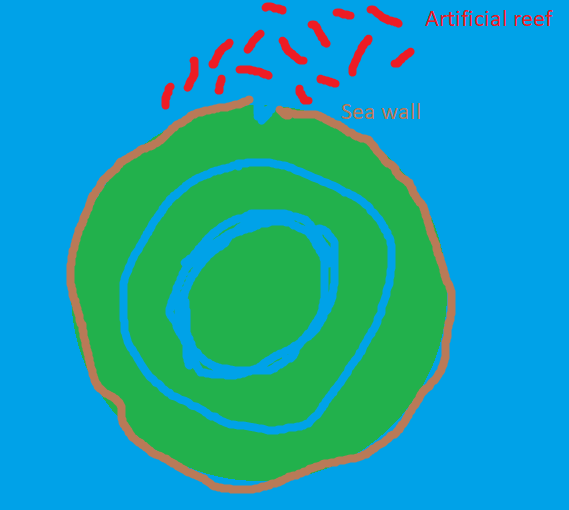 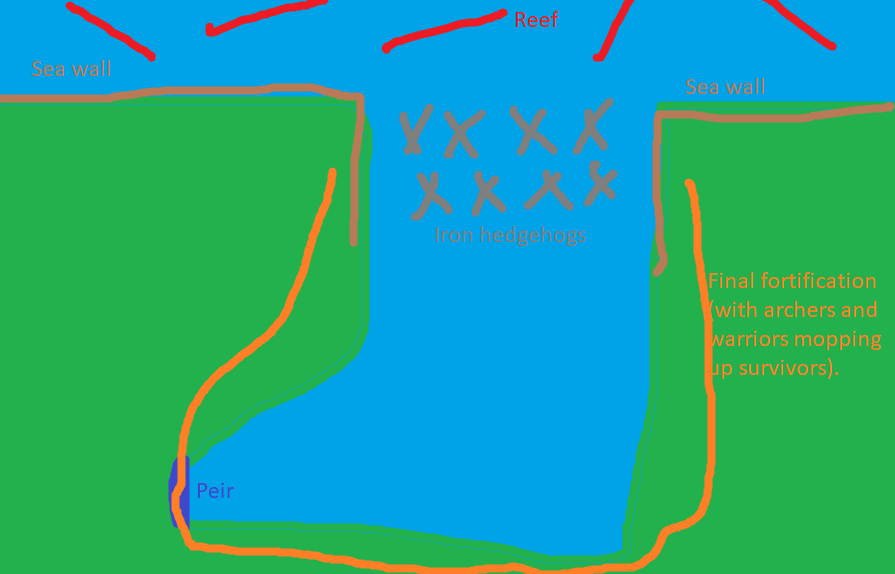 How would the enemy get past it? Literally over the bodies of their comrades. Once there are enough shipwrecks and dead bodies on a reef they can make it to the walls then eventually up high enough to throw a rope for climbing. You should have a lot of warning this is coming to get an army in position to repel.

The Neo-Atlantean government could begin by using their resources to build the central metropolis upward, in order to house more people. Farms could be relocated to the inner circle.

The government could then start evacuating the outermost ring. Given the amount of time to prepare before the attack, to reduce panic, the residents of the outermost ring could evacuate gradually, over the course of a few months or so. Military stations could then be set up in the now empty ring, and the bridges supplying this ring could be widened to improve circulation of supplies and troops.

The five years of preparation time could also be used to conduct advanced training of the Atlantean military, giving them a valuable fighting advantage.

The soldiers in the outer ring would be entirely foot soldiers.

The soldiers in the inner ring would be archers, and cavalry would be distributed among the bridges to the outer ring. The edge of the inner ring could also feature cannons, catapults, and other heavy, ranged equipment.

Before the attack, the bridges would be narrowed to decrease the amount of enemy soldiers getting through, and they would be pre-rigged with explosives of some kind, to take them out in the case of the outer ring falling to the enemy.

The foot soldiers in the outer ring would lead the opening defense during the invasion. If the enemy forces make it to a bridge, the cavalry stationed at the entrance at the other end of the bridge (in the inner circle) could rush out onto the bridge, overwhelming the enemy and potentially pushing them away. The cavalry could also rush the bridge enemies while the infantry attack them from the other side, crushing the attackers and saving the bridge. (In this scenario, not all the military would be defending a bridge; just the nearest troops to it would help out.)

If the outer ring is taken, as many friendly soldiers as possible could be evacuated to the inner circle, and then the bridges could be blown to stop the enemy. With just 5% ranged attackers, the enemy would have a difficult time continuing the front (except for with their ballistas).

With the enemy stuck in the outer ring, the ranged soldiers could go to work picking them off from the inner ring using their arquebus, and the evacuated foot soldiers could man the heavy, ranged equipment to take out whole swaths of opposing troops.

Any suggestions to improve these tactics are welcome. I hope this provides a solid base defense strategy.

The original story of Atlanis said it had a vast army over a milion men and it sank under the sea about 9,500 BC.

Thus the original Atlantean civilization could not last until 1500 BC and people could not find and settle in Atlantis in 1000 BC 8.500 years after it sank.

The premise of this question is totally inconsistent with the fictional history of Atlantis.

Furthermore, the question gets the design of Atlantis wrong. The question says that Atlantis was a concentric series of rings of alternating land and sea around the central city.

But the concentric rings of land and sea were within the vast capital city. The continent of Atlantis contained other parts and areas beside the vast capital city. The description mentions a vast flat rectangular plain, surrounded by mountains, and probably there were many other regions of Atlantis besdie the city and the plain and the mountains, other valleys and mountains and plains, deserts and jungles and rich farmland, etc.

Not the answer you're looking for? Browse other questions tagged alternate-history military-defense or ask your own question.

9
What kind of natural defense could a planet have?
2
How can I re-fit the Atlantis story to a location in the Caribbean?
2
Could This Sort of Castle Defense Work?
2
Primitive AA defense
6
Defense procedures in case of encountering robotic alien locusts
6
How practical are walls and other tall fixed fortifications when it comes to the defense of a city in a post-apocalyptic setting?