How do I naturally keep potable, fresh water from freezing?

My planet is always very cold (I don't have an exaxt number). So cold, that most fresh water would freeze. How do I keep this from happening? Humans can't bring it about, and humans also have to be able to drink it. It's prefered if there is some way to keep it warm enough that it doesn't freeze, but otherwise, it's still fine.

Clearly any atmosphere solution is out of the question. Theres a few solutions to this.

Geothermal activity might allow some freshwater reservoirs to stay fluid. This isn't a worldwide solution though. There are many examples of heat coming to the surface of the planet. Hot springs, volcanoes and gasses can all heat up the water, move it enough or dilute it enough so it'll stay fluid.

Secondly you can have organic material in the water, heating up. Many organisms expel heat during some phases, which can be greatly beneficial. It is why many creatures transferred to hot blooded solutions, but also many bacteria and viruses operate best at certain higher temperatures. On a cold planet, life evolves either to survive in the cold, or will generate enough heat to survive. The evolutionary path can possibly create organisms that thrive in the freshwater and generate eniugh heat to prevent the freezing.

Moving water resists freezing. Frozen water can act as insulation, keeping the water below it from freezing. A river is a good example. This answer on the earthscience stack covers it.

Water, ice, and snow are good insulators and poor conductors of heat. The portions of a lake or river that are exposed to the cold winter air will freeze into ice and this ice insulates the water below from further rapid freezing

Small rivers can freeze down to the bottom, but larger rivers and faster rivers will usually maintain some liquid water. Your characters will have to dig thru the ice to get it.

Banff in the Canadian Rockies is plenty cold. But you can go swimming in midwinter. 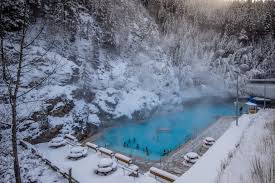 Geothermal springs heated by deep sources come to the surface. This would be a lot less work than digging thru the ice for people in your world. Plus it would be a rare chance for folks in this cold world to show off their swimsuit fashions.

Internal friction of the water, as well as friction against the banks also provides some heating effect - a flowing body of water will actually have more thermal energy to extract than a still one.

Note: Mixing due to flow will only slow the freezing process, but will not prevent it entirely. If the ambient temperature remains freezing long enough, eventually the entire body of water will lose enough heat to freeze through.

No need to do anything

Let it freeze. As water cools down, it gets slightly denser and denser - until it reaches 4 degrees C above 0. At that point things reverse, and colder water gets less dense. This means that usually the colder water rises up to the surface. And that is why when rivers freeze, the surface freezes first.

Ice is one of the best natural thernal insulants there is. It separates the air above it from the water below it, keeping the river under the ice liquid. When your inhabitants need potable water, all they need is a drill and a bucket.

Fresh water doesn't mean it completely lacks salt and other stuff, so just make sure it has enough salts and minerals in it to keep it from freezing, but not enough to harm the inhabitants or prevent them from using it without distilling it.

Water that is not salty, for instance water found in lakes, streams, and rivers, but not the ocean. Also used to refer to things living in or related to freshwater
...
Freshwater is water that contains only minimal quantities of dissolved salts, thus distinguishing it from sea water or brackish water.

You can also have a naturally occurring sugar repository that mixes with the water. That will not only help keep it from freezing, but will hide some of the salty flavor. Many sports drinks have salt in them, and the US Army would bring out Kool-Aid with salt added to our various training locations. There were few times we could actually taste the salt, one of them being when they forgot to add the sugar, but remembered the salt. But I digress.

The sugar source could be some very industrious and insulated bees, or it could be that the waste of an large herd animal is sugary and they always relieve themselves in the water.

The state of matter is dependent both on the temperature of the material and the pressure it is under. Because liquid water is more dense than solid water, pressure will push it to its densest state.

Be careful though, this approach may work for moving it through pipes, but it may rapidly freeze when it is depressurized.

I post this answer because it's about a result I read about recently. It's not necessarily a great fit for your World because either your humans have to have access to relatively advanced technology or there has to be some natural source of this material...

In "Soft biomimetic nanoconfinement promotes amorphous water over ice", Livia Salvati Manni, Salvatore Assenza, Michael Duss, et al. (from the abstract) "introduce a family of synthetic lipids with designed cyclopropyl modifications in the hydrophobic chains that exhibit unique liquid-crystalline behaviour at low temperature, which enables the maintenance of amorphous water down to ~10 K due to nanoconfinement."

The short version is that a self-assembling network of lipids (generally, fat molecules) produce approximately 1 nm channels that are structured to prevent water molecules arranging into crystals, thus inhibiting ice formation. The result is ... a complicated amalgam of few-molecule partial crystals that have very short lifetimes -- as if the water were a chunky liquid, down to 10 Kelvins (-263.15 Celsius).

It's still that cold (in the absence of a heat source the zeroeth law of themodynamics will drive heat from warm water to cold environment, no matter what fancy arrangement of lipids it is in), but it's not frozen.

Not the answer you're looking for? Browse other questions tagged water ice or ask your own question.

2
All fresh water is frozen
5
Water supply in medieval realm
2
What technology can create water on an airless, desert planet?
9
How to manage water in a city 2500 feet below sea level?
18
How could an organism store a massive amount of water?
8
Could water be separated from a mixture by natural condensing/freezing?
7
A snow sea: How to make water snow light/smooth enough to obtain fluid properties under 1 gravity
6
Maximum realistic salinity level with thriving aquatic environment?
5
Possibility of a “hot Mars”
1
Freezing the water in blood