Moon-moons of moons of rogue planets

So, I had this idea. It takes place on the moon of a rogue planet. This moon has moons, or moon-moons. The inhabitants need to be able to see all the moons as well as the planet they orbit- how is this possible? Moons and planets only reflect light from stars, and a rogue planet has no star, so how could people from this moon see its moon-moons and its planet?

The gravitational acceleration on the moon-moon from the moon is .107 N/kg, and the planet's gravity cannot exceed that. That means that the minimum distance between planet and moon-moon is 24 thousand km, so the moon must have an orbital radius of 27 thousand km. So the moon and its moon can probably be seen from afar. As for illumination, there's starlight, and the moon and moon-moon would block out the stars behind them. It would work out especially well if the planet was situated deep into the galaxy, and thus, where there's enough starlight for a world to support life.

For the basics, we have a rogue Planet with more than one Moon. Since it is a rogue Planet, the Atmosphere is gone. The Surface is most likly Ice and there is no Sun nearby.

Not gona lie, this is a thinker.

Option One - Change the Spectrum

So Visible light is in short supply. But Radiation is not. And thinking about it, it would make sense that creatures evolved to see Infrared Radiation. And if there Eyes are sensitive enough, the Core planet might glow a bit duo to its own Radiation.

Of course there is that problem that the Radiation is comming from the Core. Which is shielded by a few Kilometers of Ice and water so weather this works is questionable at best.

Magnets, how do they work ?

My next idea would be to give ALL Moons and the Planet really strong Magnetic fields and in general, just litter everything with a lot of Magnetic Materials and Iron. Why ? Because of the fields.

Now, i am not to sure if that could actually work but Magnetic fields direct the flow of Electrons. And so the idea is that if all the Fields are strong enough, they will probably Merge into one pretty messy and big field which might be visible in certain Spectrums ?

And if the big field is strong enought it might just make your day ?

But i am really not sure that is a thing.

Really sensitve eyes are of course an option too. We are in deep space but stars are still around. The Amount of light hitting the Planets is really small thought. Id imagine if creatures evolved to see in that enviorment, the simple Status LED of a TV would be as bright as a Nuke to them.

This reminds me of a scene from The Phantom Menace, in which Obi Wan Kenobi is discussing with Yoda about a place that seems to be invisible on a map. Then Yoda asks a kid about it, and the child gives the adults a "duh" moment. Don't look for the unseen, but pay attention to the effects it has around it.

In your case, the rogue planet will have a constant night-sky all around it. It may have way more visible stars than the night sky over any city on Earth. You will see some dark discs covering stars and nebulae, and these discs move across the sky. Those are your moons and moon-moons.

It helps if there are really bright nebulae around.

To properly illustrate this, think of the Horsehead nebula. It's the dark thing right in the middle of this picture: 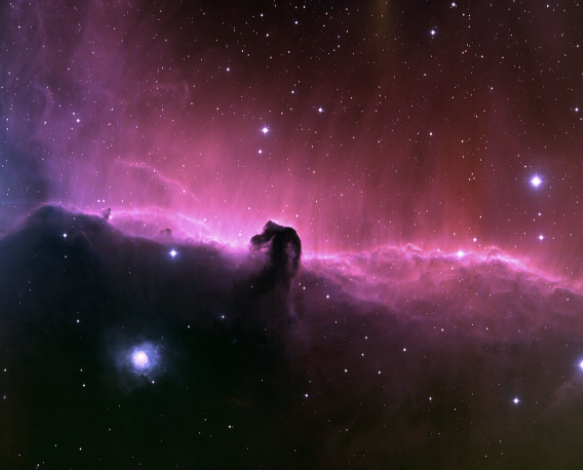 It is quite dim; Bute can easily figure its form because it is obscuring something bright that is behind it.

13
How can you make a stable configuration including a moon that has a moon?

6
Is it possible for a geologically active 'rogue planet' to support life?
6
Life on a rogue planet
10
Moons in Binary Orbit
4
Possible compositions of a rogue binary system?
3
Earth-sized Moon with Host Planet launched from Star System
4
How can I calculate and create a calendar for one of 4 moons of a Jupiter-like planet?
1
Efficient way and rough design to detect rogue planets in interstellar space
3
Is this rogue planet capture process possible?
5
Complexity of ecosystems in oceans of rogue planets