How would a "flaming collar" work in an animal and how could it be useful?

This a concept which personally I see with a lot of visual style and epic to describe, to be implemented for a creature in a fictional world. Probably you can call this "burning head" or "flaming hair", my point is get something that can look like flames surounding the head (but currently prioritized to neck), this can be and usually is applied both to humanoids and fantastic animals. So for lack of a better term, just look for images that represent what I mean even if the explicit concept was not the same.

But first of all some examples of what I mean: 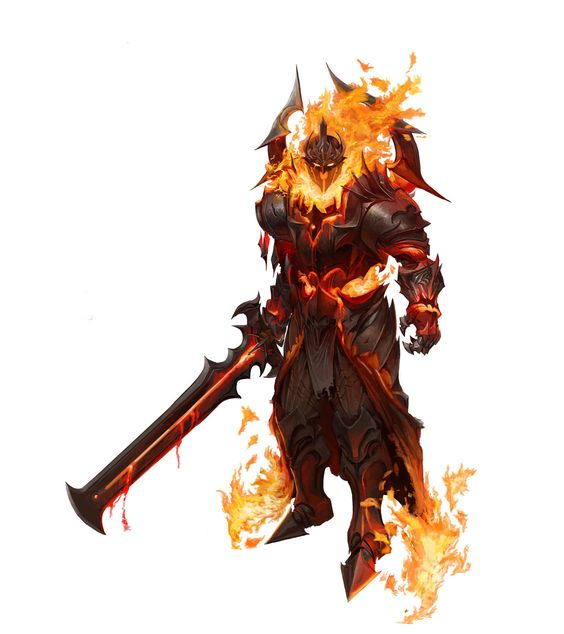 I know probably this drawing tries to represent something more like a spirit than living humanoid which is set on fire "all" the time, but imagine the second option, you could see that flames around the helmet comes from the neck. 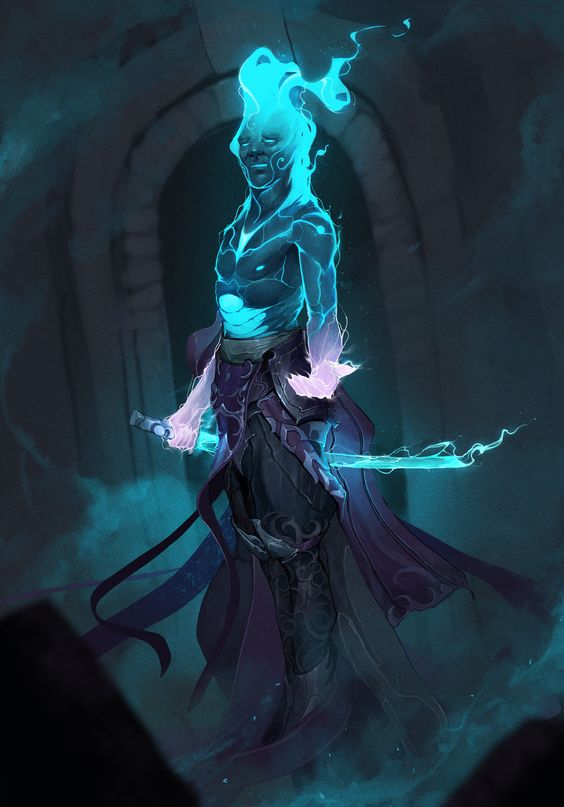 Probably this represents a magic energy , but I thougth coould be interesting consider different colors (and maybe temperatures) for this "burning neck". 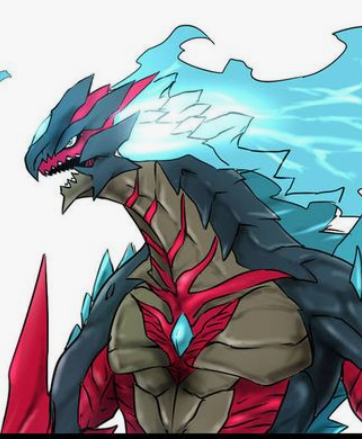 A less humanoid creature, showing a variation of exactly what I meant 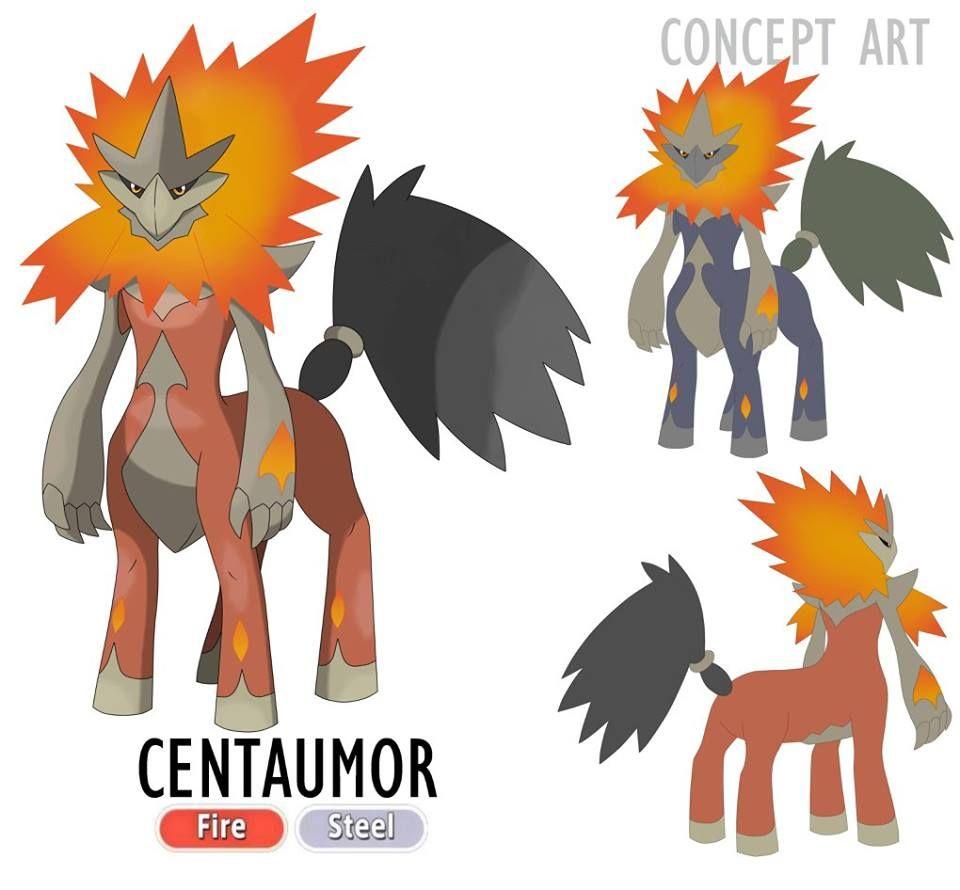 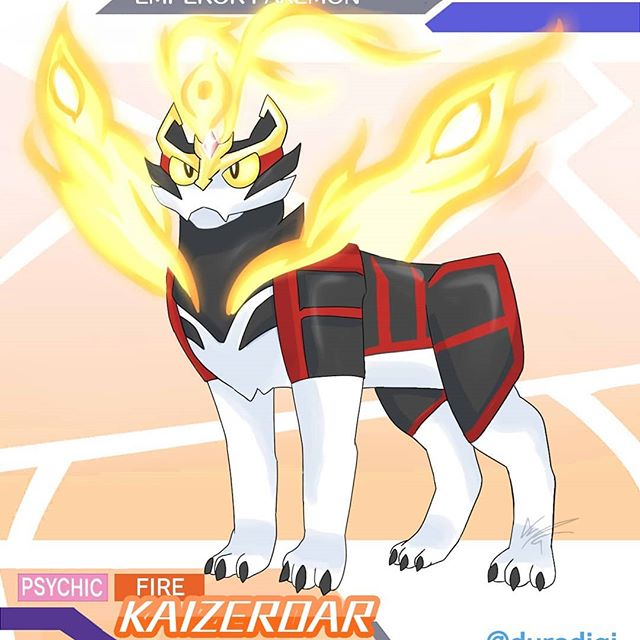 Now, passing to the problem, initially we can consider this the common problem of dragons and phoenixes, but just partially based on that personally the problem of a living organisms producing fire have a lot of answers giving possible solutions and others resalting problems are too much (like here dragon that breaths napalm or here in the Anatomically Correct Phoenix.

So, we gonna supose an organism that have the capacity to produce an oil like substance in some part of its body and can light it on using a catalizer or an electrical like eel cell (with a spark), but the problem now is, how this creature could resists its own fire? Till where I know neither a tardigrade could resist this high temperature.

Then, speaking about the possition of "the burning structures", no one creature would want a dangerous fire so near to important organs of its face, eyes can be easily hurt severaly damaging the vision and the nose will breath constant smoke, unless be a complete combustion but now would be stealing the oxygen, and do not forgetting the skin bones and brain. If we have the solution of how this creature produces and resists its fire, would be needed solve the existance of this mechanisms, maybe could be a sexual ornament, with some practical applications that evolved later, like scare predators or generate light during little periods (by pulsant lights), maybe can set on fire its head at critical moments during fights for look imposing or hurt the attacker when tries to hit or bite its head. But whatever the cost-benefit looks uneven. What could be the real uses for this mechanism?

So, I thought is inevitable that we are getting a highly specialized organism, so, my current possible solution is a reptiloid organims, with hard scales (even integrating novel materials, silicon, graphene or iron) from the collarbone joint to all the head, with oil glandules comprimed between the scales, with the lighter structure over the place in which is the pharynx. Still existing a lot of problems, so there are less interesting and focused options, for example just a klamidosaurus collar which looks like fire andd get warm by a high concentration of veins, or just an abundant fur or plumage, that looks fire caused by the color and recovered with an irritating oil that can generate rashes like burns.

What could be your soltions for this?

Edit: I totally forgot how this creature will turn off its fire.

A fire collar would be possible for a short staged performance by a professional fire dancer.

(I understand the question is more focused on fantasy creatures than real life - but I do have some real life experience with fire close to my face that I think can answer your question on how this would work.)

So fire near heads as part of a stage show or performance is doable; here's an example of a fire bowler and a fire crown (made by Krisztian Gora - full disclosure I'm a reseller of these): 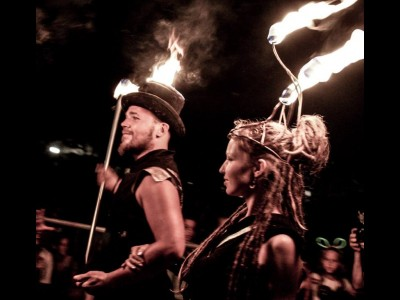 And here's someone using 3 hula hoops with fire on the end of spokes. Note how close the fire comes to her neck: 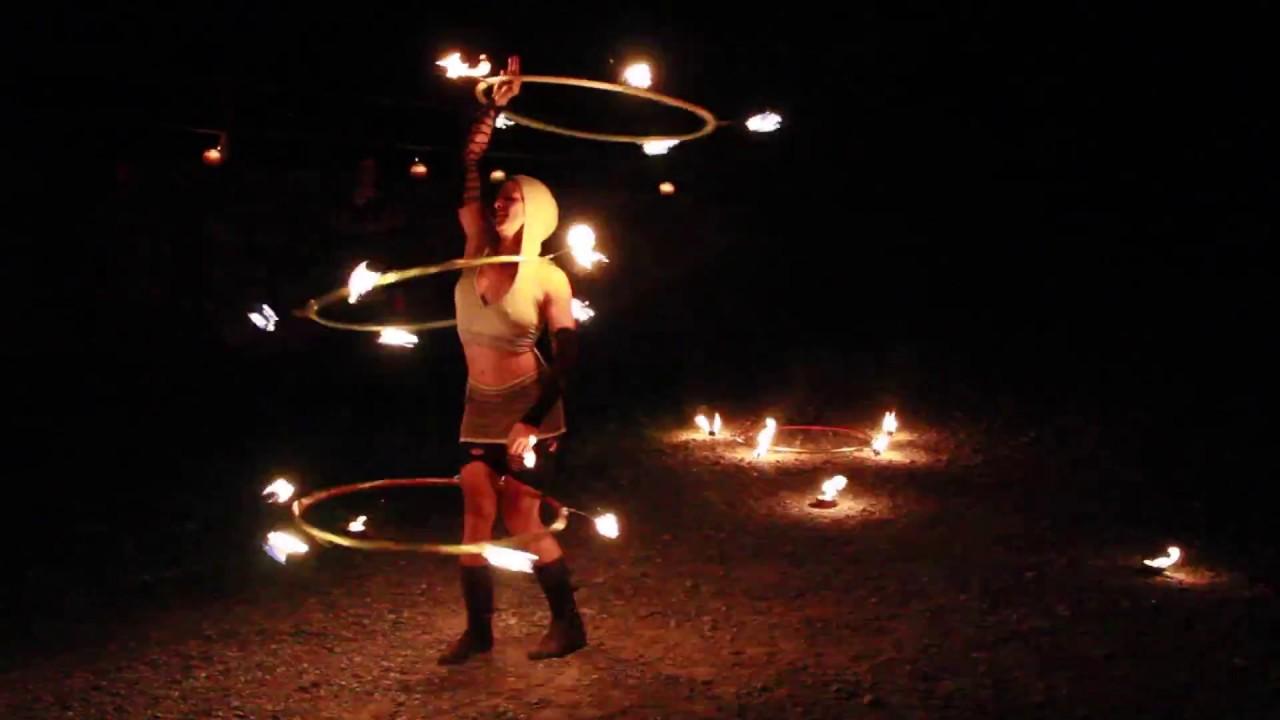 Here's what they look like not on fire (Full disclosure - I make and sell these): 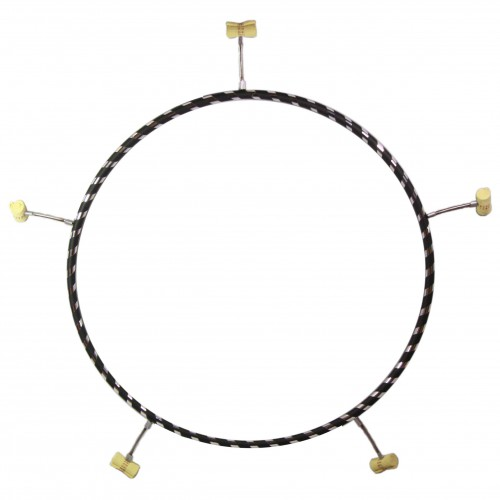 I have used these hula hoops while on fire - you can bring the flame close to your body, you can hold the hula hoop with your neck (this is how I learnt to do two flaming hoops if you couldn't leave a flaming hoop on the ground (and too uncoordinated to start two at once) - hold one with your neck while starting the other, then start the one you held with your neck), you can even briefly touch it, but you're wanting to keep the flame about 20-25cm away from your face if you're holding it there long term.

So, if you're happy to just keep wiggling your neck back and forth, you could just use a smaller diameter hula hoop. The spikes would need to be about 25cm long but that could work.

If you wanted to keep your neck stationary, you need something to stop the collar from settling - as the back would hit your hair on the back of your head and the front would ignite your chest. You'd probably want a large bulky collar as the weight of the fireheads soaked with fuel would cause them too droop over such a large distance.

If you're a seriously good fire performer, with a safety crew, and speciality low-temp fuel, you could do a short performance wearing a prop like this. To give an idea of the minimum dimensions I'm talking about here, this is a rough sketch of the minimum distance I'd be comfortable with a static performance peice: 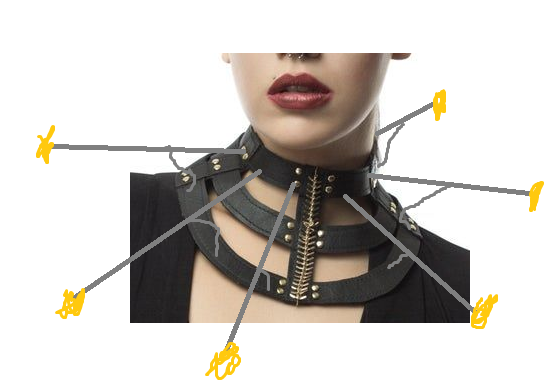 Static fire pieces this close are different to normal fire dancing props - they can put out soot and different fumes than dynamic performances - you need to be careful with your fuel choice as many of low odor fuels are carcinogenic. I'd be looking at a cool speciality fuel called "Shellsol D60" for this, it's a combustible liquid (not "flammable", but "combustible". Like paper) that sold as an industrial solvent and burns quite cool. It's the only fuel we're allowed to use in fire dancing festivals in the Australian outback in summer.

You'd need to soak them in fuel and re-light them every 5 minutes however. That will kind of detract from the awesome spectacle of a fire collar if you're just sitting on a throne all day wearing it.

If you're wearing this - do not lean or bend over - fire burns up. You couldn't even scratch your nose. You'd need a quick release for the collar in case of an emergency as even a small stumble could be dangerous. A sneeze could take out your eyebrows.

What's it useful for?

Intimidation and looking epic. It serves no practical purpose other than demanding respect.

Here's an idea: Heating and defense. If the creature produces an exceptionally-high amount of thermal energy, the gases coming out of its pores could ignite with the air as they're shunned out to cool the creature. Or, if it lives in cold climates, the flames would come from a flammable material, and be activated to keep warm. Or to prevent predators from attacking them.

Not the answer you're looking for? Browse other questions tagged science-based reality-check biology creature-design humanoid .

46
Anatomically Correct Phoenix
11
Napalm-Breathing Dragon
7
How to avoid respiratory and circulatory problems in a firebreather or flaming creature?
6
How a living creature could produce "bio" aerogel?

7
Is my fire resistant megafauna plausible?
0
Could the Goliath monster from “Evolve” (the game) feasibly exist
3
How make look feminine and masculine (non mammalian) animal humanoids?
2
How could "muscular hair" work?
7
How to avoid respiratory and circulatory problems in a firebreather or flaming creature?
9
Is this creature's proportional head size feasible?
4
How much can be modificated the humanoid body plan and still being able to perform the high speed throwing?
3
Anatomical Review #2: Follow up questions on my semi-arboreal imp (with drawing)
6
What would be a propitious environment in which centaurs could evolve?