Can a robot which flies like a bat have telescopic wings?

Working as a continuation of the concept I mentioned in my previous question, my character is building a flying robot, which has wings which function much like those of a bat. The robot in question weights 150 kg, is 2.7 meters tall, has a wingspan of around 16 meters and a wing loading of around 93.75 kg/m^2.

The main issue here is: the robot is not meant to be only capable of flight, it should also be able to move on the ground, which, when you have 8 meter long wings attached to your back region, can be a tricky matter. To mitigate this issue, I planned to make the rods equivalent in position with a bat's ulna and radius bones each capable of collapsing, shrinking to a size slightly longer than 1/3 of their original length, as hopefully represented below: 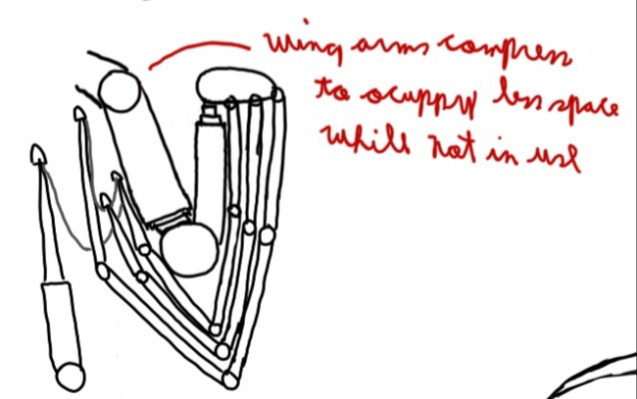 Given this scenario, is such telescopic wing actually possible without compromising the wing structure altogether? I planned this wing "Skeleton" to be made out of a titanium alloy and control the compression and elongation of the wing via either hydraulic or pneumatic mechanisms, but before I started to question which would be the best method, I started doubting if it was even possible to begin with.

I think the main problem you will face is how to keep the leading edge of the wing surface.

Using the telescopic implementation of the "bones", when switching between the "all in" and "all out" configuration you will have to ensure that also the wing membrane accommodates for the movement.

But since the membrane cannot go inside the structure, you might end up having a gap between the bone and the membrane, in the region I marked in blue below.

Such a gap might be detrimental for the wing performance (membranes are sensible to turbulences, you don't want it to flap like a flag in the air stream).

You might solve the issue giving enough tension and proper stiffness to the membrane, but you will need to ensure that the whole things can also withstand being wrinkled in the "all in" position.

This is not an answer, but an animation I made to give an insight as to how the folding process might work:

Not the answer you're looking for? Browse other questions tagged technology flight winged-humans flying-machines or ask your own question.

11
Could you make Bat wings shaped like the different kinds of Bird wings?
6
Air bladders in bat-like skin wings for better lift?
5
Why would a bird have split wings?
6
Materials preferably available up to early 1900s ideal for mechanical wings
6
Unique take-off strategies for six-limbed creatures?
8
Scaling up the bat wing: still a good alternative for a large flying animal or inferior to a pterosaur wing?