Is it possible to make blazing, flying spores/seeds?

You may have heard of pyrophites : They are plants which have a strong relationship to fire, whether they are extremely resilient to it, blossoming with it or simply as a way for their seeds to sprout.

I am devising such a plant that has an aggressive way of expanding, burning their surroundings to ensure they will get light, and maybe even retrieve specific resources from the cinders. Kindikinda like Slash-and-burn agriculture, without the slash part. This plant would emit slow-falling spores or seeds, very hot to the touch, and which may be even in flames as it lands on the ground.

For that purpose, I would like to know if such seeds could exist? The seed can be any shape and material you can imagine, as well as the type of plant producing it (tree, bush, grass, mushroom...). However, I'd very like it to respect physics, and to be based on concepts close (though not necesarily the same) to real world biology and chemical equivalents. Still, I won't be sad if you don't bring up scientific documents and calculations to support your solution (unless it's extraordinary, of course).

To help you, below are specific goals I wish to reach.

Note that I tagged some objectives with "[Secondary]" : If you can't reach that goal from a scientific approach, then simply waive it away telling that you haven't managed to make it (that's okay! I can understand ;)). Then continue on, supposing this goal is reached through magical or other unknown means or is simply isn't part of the solution. Still, the more goals you can complete and include at once, the better it is!

Bear with me here.

So your seed has an outer gel coating that is extremely flammable and will burn hot for a decent amount of time. Then an inner protective layer which separates the seed part of the seed from the flammable part.

These seeds are contained in a large-ish gas sac filled with flammable gas. And on the outside of those gas sacs, there are little bulges that contain two separate chemicals that, when pressure is applied, the separating barrier breaks causing them to mix, which results in a mini-explosion that ignites the gas sac, causing the whole thing to explode.

When it explodes, it launches those seeds into the air and ignites them so that their outer coating is on fire.

When the seeds land, the coating sticks whatever it lands on causing it to set on fire. The seed of course is non-flammable so it survives and when the fire burns out, it has all this wonderful ash fertilizer to grow in.

Now, how do these sacs get the pressure they need to activate the chemical reaction? Simple, there are multiple sacs, and the gas inside them is lighter than air so that they kinda float like a balloon. They are of course attached to the trunk of the plant so that they don't float away, but when an animal, insect, or just a light breeze comes along and either bumps against or causes the sacs to bump against each other, it activates the combustion mechanism and boom you have exploding gas sacs, sending flaming seeds all over the place.

Many of these requirements should be achievable, although it may require some hand waving. Quite a few chemicals spontaneously combust when brought into contact with other chemicals. Many of the alkali metals combust on contact with water or oxygen, although both of those will likely be present everywhere in your plant, so this is not a good idea. Sulfuric acid produces flammable hydrogen when encountering metals and will produce heat when mixed with water. This could be used to start combustion when needed. All of these chemicals are able to be produced in living organisms and this is therefore probably an okay option. These could be stored separately in an outer casing around the central seed and could be mixed when needed. Sulfuric acid may degrade over time or entirely destroy the seed, so if anyone has any other suggestions then please tell me.

The inner seed would need to be fireproof and the outer shell would need to contain some flammable oils. The seed could also utilize a "hot air balloon" type of floating by using its heat to produce hot air, which is lighter than cold air. This would be more effective with a larger balloon size due to the square-cube law, although smaller seeds could augment their flight with wing-like structures.

There are many such as you describe. 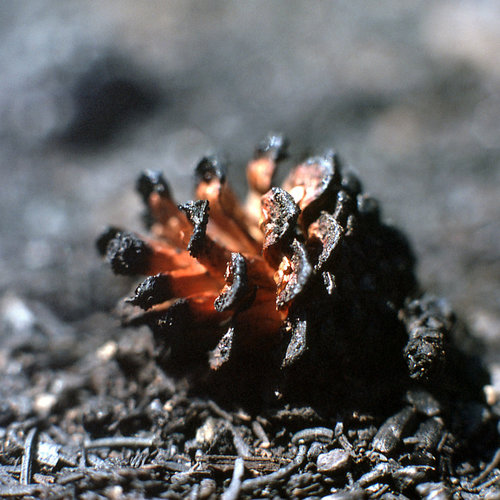 "Serotinous" seeds which require a fire trigger to open are common in parts of the world where fire is common. I am familiar with the lodgepole pine from the northern US.

The bark of lodgepoles is thin, which does not protect the trunks from scorching by fire. They die easily when a fire passes through. However, the serotinous cones give lodgepole pine a special advantage for spreading seeds for the next generation. These cones are closed tight with resin that melts during a fire and releases seeds that have been stored for years. These seeds germinate in conditions that favor the tree’s seedlings, where the forest floor is clear and plenty of sunlight shines through an open canopy.

The cones can open by catching fire, or just by getting hot. The one depicted here burned a little but will be fine and is getting ready to make a tree. I will testify that it is possible to burn these cones completely in a campfire, but if you get one lit by itself it will generally go out. There are other pine species that do this as well as unrelated species. https://en.wikipedia.org/wiki/Serotiny

Your only difficult ask is the slow fall. To be triggered by fire but not have the seed itself burn, these fruiting bodies and seed cases need to be reasonable robust, or wet, or both which means they will probably fall pretty fast and not drift around like dandelion fluff.

I can't find the English name, but the principal behind hay fires could be a solution.

Hay fires start because bacteria will start some awesome biological processes during their hay consumption. This requires a highly moist environment within the hay. The consumption process releases heat, which in turn quickens the bacteria. At around 55°C (131f) flamable gasses start forming, heating the hay further. This has several stages, but the most important thing is that when it heats up enough and gets oxygen, it'll combust.

This likely won't be directly applicable to seeds. However, it does show that with the right proteins and such you can make something hot and combust. The plant can do something similar with overpowered mitochondria or heat generating proteins together with a gas. It'll be hot to the touch and if you give the seed several phases you can potentially create the scenario you want.

Example how it could work: Seed grows on the plant. When the seed reaches maturity, the plant starts the process to release the seed.

The seed will start internal processes at a certain point, heating up.

The plant can react to a certain amount of heat, flinging the seed or severing it. Thermic reactions take a lot of energy, so you want the heating to only be done when at the best moment. Making the plant let go of the seed when it reaches a certain temperature makes this happen.

The seed will fall down, possibly moving on the wind if enough flight assistance is grown.

Seed will likely settle on time for when the heat is high enough for the next heat trigger, releasing the gas to the oxygen and will catch fire.

The seed likely needs to be rather large to have enough energy to heat up significantly, produce enough gas for the initial burning and fireproofing of the seed. This will impede easily floating on the wind, unless you decouple the firestarter and the seed (launching fire first, seeds after). Regardless, heating up just requires a ton of energy and will always be a problem for the size. Basketball sized seeds would help, allowing also multiple seeds to be held.

If you accept the plant to be (partially) burned, you can also just set fire to the surrounding area and let the seeds fly on the updrafts of the hot air.

16
Fire Resistant Flora
75
Are flying plants possible?
9
How would plant control powers/magic work?
6
Killer seeds for the sake of early plant growth
4
What modification would make literal fire trees be able to grow?
17
Where can you find berries that eat people from the inside out?
3
What adaptations would a tree need to survive an area with monthly fires?
0
Is it possible to have a cold flame?
4
Can a plant or alien plant have fruit and shoot seeds as well?
4
How potent would a dragon's fire be?