What are the dangers of using fusion rocket engines in atmosphere?

As far as I understand, when you fuse deuterium (H-2) and tritium (h-3), you get a helium atom and a spare neutron. Basically alpha-rays? Now alpha rays are easily blocked by matter. You can block alpha rays with just a sheet of paper.

Does this mean that you can safely use a deuterium-tritium fusion engine in atmosphere? Not on the ground obviously, but somewhat higher in the sky.

Alpha ($\alpha$)
The $\alpha$ particle carries a charge and can be easily directed with electromagnetic fields.

Neutron ($n$)
However, the neutron ignores everything but nuclei. Not all nuclei are created equally in protection against neutrons. Low mass nuclei work much better than high mass ones in protecting you. You want your neutron shielding to contain high amounts of hydrogen (water works great).

In any case, a fusion powered ship requires substantial amounts of radiation shielding against the $\gamma$ and $n$ radiation. Ships of this sort use something called a Shadow Shield. This shadow shield blocks the $\gamma$ and $n$ radiation and forms a radiation free zone for the inhabitants of the ship. The designers limit the shield size to only provide protection for the crew cabin based upon direct line of sight (no portion of the crew cabin can see the core - the shadow shield blocks the view)

Why Radiation?
When in an atmosphere, radiation flowing away from the reaction, in any other direction than the one protected by the shadow shield, reflects off the atmosphere and irradiates the crew cabin.

This is bad & probably deadly news for the crew.

Definitions
For the other explanation, I'm going to split fusion reactors into two classes, external core and internal core.

I'm defining external core as reactors as those that perform fusion outside of the material portions of the ship. The fusion occurs in (presumably) an electromagnetic or electrostatic containment system so that most of the reaction radiation does not impinge on the matter portions of the ship. Nuclear Pulse Propulsion falls into this as well as several other designs.

In this context, an internal core reactor is one which performs fusion inside the matter portions of the ship.

Why other stuff?
Some forms of external fusion reactor cannot operate in an atmosphere. Current Era (CE) fusion plants require operating in a vacuum. So the density of the fusion reactants is much lower than that of the atmosphere. 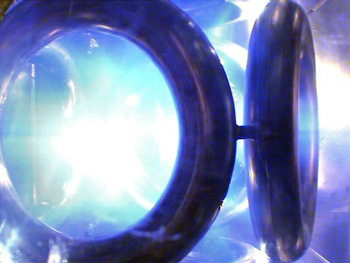 This usually leads to the ship crashing to the ground.

This is bad & probably deadly news for the crew.

The biggest problem with using a fusion rocket in the atmosphere is most fusion reactor designs require the reaction to take place in a high vacuum. The air will "quench" the forming plasma, absorb a lot of the energy in ways the designers did not plan for and possibly throw off side reactions that could damage the structure.

If the fusion reaction is an implosion design using lasers or particle beams, the atmosphere will absorb some of all of the incoming energy (especially if the lasers are of a very short wavelength), and the fuel pellet may also be tossed about by air currents and not be at the focal point when the beams converge.

About the only way a fusion rocket would work in atmosphere is if the fusion reaction takes place inside the spacecraft and the energy is used to heat reaction mass in a separate chamber.

The lack of pollution is one of the big theoretical advantages that make fusion so attractive.

Not the answer you're looking for? Browse other questions tagged physics space-travel spaceships chemistry or ask your own question.

9
What engines would a bioship have?
7
What are dangers of long space travel?
2
How big/powerful would your fusion reactor need to be to power the engines of a 32km long starship?
4
How to alter the atmosphere as to make aerospace engines highly volatile?
3
In an elliptical orbit, where should a rocket fire its engines for maximum efficiency?
3
High-atmosphere wind dangers on a rocky planet
1
What would be the dangers of creating matter from nothing