What kind of musculature is needed to be able to have each individual tooth to spin like a drill?

As the title says, I want to know is there a musculature way to make spinning individual teeth possible. This is not the same like rotating the jaw like my question here: anatomy or musculature to achieve full rotate jaw?.

I originally think the teeth is not fixed like shark teeth, but if it's possible to achieve it even in fixed teeth, that would be welcome.

I don't mind if each spinning tooth is not synchronize with each other at the same time, even better if they can spin separately or can manipulate it to spin single/individual teeth too (just to be clear, it still can spin multiple teeth in this context).

Feel free to suggest the tooth shape to accommodate/enable such spinning to be possible, since I originally thought to use full canine teeth/fang just a bit of swirl, or a wave like in cone drill pattern, or like this one.

Just like the flagellum, you could mount your teeth on biological electrical motor (yes, they really use electric motors). While flagellum motors are extremely small, a larger design that rotated with more torque and a lower rotation speed should be possible.

You also need a redesign to support increased axial loads typically associated with teeth. This is commonly known as a thrust bearing in mechanical engineering.

If you wish for full, unlimited rotation, I am afraid there is nothing like that in the real world.

You can draw some inspiration from carnivore mollusks, though. Mollusks in general have a tongue-like organ called radula, which is covered in teeth and is able to move sideways a bit. In many species those teeth are even mineralized with stuff like magnetite, which rates at 5.5 to 6.5 in the Mohs scale. For comparison, human tooth enamel is rated 5.0, which means radulae can very easily scratch teeth, and with time and patience they can easily turn teeth into dust. Such radulae can also cut through glass (Mohs rating 5.5).

The radular teeth can generally bend in a sideways direction (...) In a flexoglossate radula (the primitive condition), the teeth flex outwards to the sides as they round the tip of the odontophore, before flexing back inwards.

And this is what some radulae look like under an electron microscope: 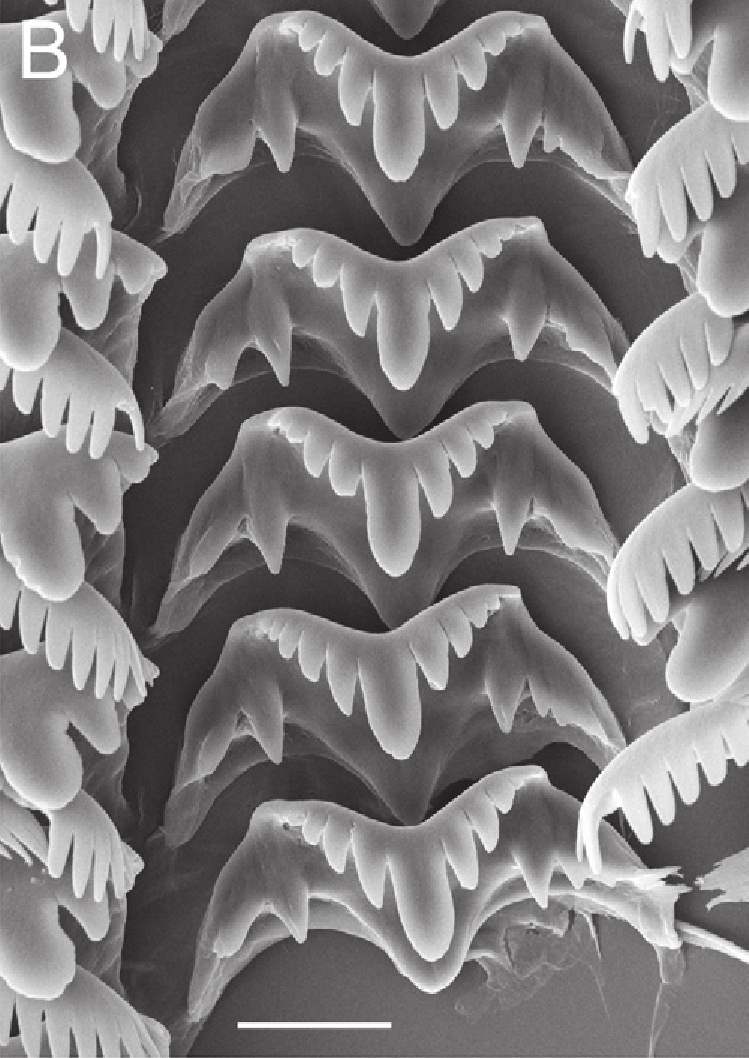 The white scale bar at the bottom of the image is 10 μm long.

And since mollusks have no class consciousness at all, there is even a species of snail that is called "oyster drill" - it drills into oyster shells to eat them. While it does not drill as you probably expected, it does pierce into hard shells by constantly licking into the oyster shell with its radula.

That said, your creature could have a set of rigid radulae instead of actual vertebrate teeth. Each radula would then be capable of rotation by twisting itself either clockwise or counterclockwise, for a few turns (like a steering wheel, or a tap/faucet). Once it reaches its limit, a radula from your creature would then twist to the other side to continue "drilling".

The teeth of the radula could evolve to tesselate diagonally, and to have such spacing between them that when the creature does a single turn, it will leave marks similar to those that would be made by the drills you mentioned in the question.

With question like this that are based on mechanical objects or properties of technological objects and have not been observed in nature, I think a slight handwave copy but with biological parts would be easily accepted by most audiences and those scientific minded viewer would still be happy as they dont have an example to say you are incorrect.

Just allow enough fluid or saliva to grease the parts in motion and do a direct copy of the mechanical object but take properties of similar individual biological parts to sell the idea.

Not the answer you're looking for? Browse other questions tagged science-based biology creature-design xenobiology anatomy or ask your own question.

13
Ways to make contact with aliens on a much larger size scale?
0
Viability of an upper-jaw-only beak?
11
Anatomically Correct Modular Body Plan Animals
6
Giant bug noises
6
Is it Possible for a Biological Creature to Spew/Breathe an Explosive Instead?
2
What anatomy would a human-like character need in order to produce in its body and spit/spray from the mouth a variety of liquids?
11
is it possible for creature to have loose jaw like snake but also has enough bite strength to bit off big chunk like most predator or human do?
3
anatomy or musculature to achieve full rotate jaw?