Octahedral universe and its benefits?

I am creating a Space opera which involves highly advanced civilizations spreading throughout the universe to build the largest empires that they can. Dense supercluster nodes are areas which the most advanced flock to as these are the richest areas for matter and energy, and as these areas draw in surrounding galaxies less energy will be need to be spent to travel to and build empires and technology like Dyson swarms and other megastructures to manipulate the available energy.

My story is fairly Hard-science and has no FTL but the advanced civilizations have gained immortality through various technological methods, so taking a very long trip to distant areas of space is not an issue.

I have studied maps of supercluster arrangements extensively as well as trying to look for a pattern, due to our galaxy being the centre of most of these maps it seems like all matter forms in planes that meet in the centre which is our location but this just on the local scale. I stumbled across some maps which placed all the superclusters onto the nodes and edges of an octahedral pattern, with the voids being the volume of the octahedrons. This theory is known as the "Egg-carton" or Octahedral universe theory and I when compared to every large scale map of the universe it seems quite correct. 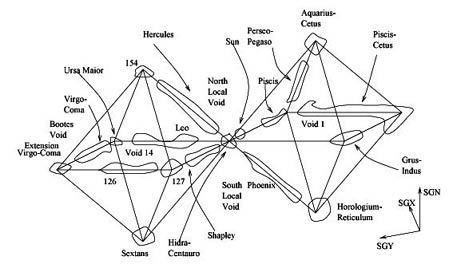 I dont wish to question this theory but I will accept it for my story and maps in my story but now my civilization has that information what can they do with it? I am asking for only hints and tips, maybe ideas present in other science fiction stories or lesser known and currently unaccepted theories.

Knowing these diagonal paths of matter run through the observable universe could be used as paths for ships equipped with an ion scoop like a Bussard ramjet, flying down the filaments with an endless supply fuel but there are more efficient methods of travel in a no FTL universe which could reach higher speeds, so this idea is not really that useful

I am not after a major part of my story to be written for me but any hints or tips, or even completely wild ideas are welcome to help me think of a way to use this Octahedral structure of the universe as a benefit to the advanced species in my story. Thank you.

Bounty edits: As I have put this up as a bounty with authoritative reference I would prefer theories that can be backed up with maths on ways to manipulate or find a purpose for this structure but I will keep the rest of my question un edited for any answers that cannot be backed with maths.

The vertices of the touching octahedra are natural transport hubs, these allow for the more efficient distribution of resources around the universe.

This assumes that there are things manufactured on one side of the universe that can't be made on the other. If this is false, then these hubs are for travellers, or for data. (Or travellers digitised and sent as data.)

If the same molecules are available universe-wide and everything is made locally than cross-universe trade will be mostly IP, and the trade of IP will need communication hubs. As will banking and government functions.

This is a bit out of left field, but if those galaxies are exhibiting forces (eg gravity) on each other, along the faces of a space filling tessellation of octahedra, that will be a 3D space filling of surfaces of equilateral triangles - the strongest polygon. With a slight modification of your diagram the universe can be filled with 60 degree angle triangles.

There is a tessellation of octahedra and tetrahedra known for its strength and is "commonly regarded as the strongest structure for resisting cantilever stresses.". Why does the universe need a rigid, strong, structure? To stop it from stretching and ripping itself to pieces.

The Octahedral Universe lets Your Immortals Predict the Future

If you are avoiding FTL travel, travel between galaxies takes serious time - even at significant fractions of the speed of light, you might spend 100s of millions of years getting to nearby galaxies.

Civilizations - entire ecosystems - will rise and fall in that time. Visit the same solar system twice, with a trip to a different galaxy in between, and you may discover that the previously habitable planets are barren wastelands, and perhaps, if you are lucky, previously barren planets might support life.

I'd argue that an Empire on this scale is utterly impossible, even for immortals. Central government hinges on the ability to enforce laws, and if you have 500 million years to avoid the consequences of rebellion, then rebellion is inevitable.

Instead, your immortals travel through other beings' petty fiefdoms. They arrive with the force and knowledge that they have gained during their incredibly long lifetimes, and bargain for - or demand - the resources they need before moving on.

Their fleets are feared and respected, for while they may lay waste to a system, they may also trade incredible technology for the material that they need. To the lesser species, they are like capricious gods, unknown and unknowable.

As the immortals travel through the vastness of space, they need to find the civilizations they want to interact with. With an endless procession of years ahead of them, your immortals will value the artistic, seeking new experiences and new treasures to admire.

They will want to find new peoples.

Knowing that the superclusters are the densest collections of matter and energy in space, they will know that they are most likely to discover new species and new civilizations if they travel to these locations.

They can listen for radio signals from their intended destinations, and try to predict where on the development curve a given civilization is, and if the species will still exist when they arrive.

Basically, the value of understanding the Octahedral Universe is it tells you where to look. Search here for new civilizations. Make your predictions based on travel time, and what you can scry across the vast, blackness of space.

In response to some of the comments:

The Immortals will never attempt to visit humanity, for example, from a different galaxy. By the time knowledge of humanity travels to a different galaxy at sub-light speeds, chances are the human race will no longer exist.

Rather, the Immortals will look at the galaxies closest to the one they are in, and do a statistical analysis. They will know the state of stellar evolution, and have a rough idea of the resources available. They might know roughly how many space faring species existed in the galaxy several hundred million years ago, if one of their kin had reported back recently.

They will try to predict how many intelligent species might exist in the galaxy by the time they arrive, based on all this past history. If the galaxy is a member of a supercluster will be an important factor, because it means there is an increased density of matter, energy, and (presumably) intelligent beings. This will be a very valuable piece of data in their analysis.

Since all hard data about the destination is hundreds of millions of years out of date, educated guesses are all the Immortals. Models of civilization evolution will have to account for the presence of a supercluster.

I will focus on the travel part; I have more ideas on this :). It should be enough generic to work even if suddenly FTL travel is made possible, up to a certain speed/acceleration for some points though.

Having this kind of star structure will make travels much easier; Indeed, if you have linked stars in a straight line, then you need a lot less to pinpoint the exact angle to reach your destination.

This difference is a bit like comparing polar coordinate systems to cartesian ones, and in fact you may even be able to pinpoint a general X, Y and Z to each octahedron vertice. Travel to these 3 coordinates, then focus again on the star you wish to reach as you get near enough to calculate the trajectory and slightly deviate towards it.

It also simplifies signalisation, you have less point-to-point destinations, so you will mainly detect close-ranged colonies, or destinations to up to 8 vertices. This reduces efforts in maintaining a map of the galaxy, and helps in understanding it, too :).

Moreover, star ship roads will be more focused than a pseudo-random or spheric configurations. Indeed, space stations and colonies will be along the lines, and since trade flows form between them, they will naturally shape fewer, big lines.

If you notice you will lack crackers to supplement your moon cheese for your trip, you will know that there will be a starway K-class station to refuel and restock on them along the road. The main differences to car highways are that it's not exactly on the side of the road and you need to decelerate a long time to reach the relay without crashing into it... Unless! Unless it is moving along the same line you are traveling, just slightly slower so you can reach it. And that could be done, since you can reach many stars and clients on a single line traveling back and forth, so there is a clear benefit in doing so.

It makes choosing a destination easier

Because it is simpler to move along the lines and you have reasons to stay on them (a.k.a stars/planets), then populations will group around them, and especially the vertices at the crossing of several lines.

Now, if your database about colonies in this sector is outdated, you will have an easier time to guess which zone is the most populated and which isn't. As an individual, you can choose to live secluded away from people (though it's rarely difficult to be alone in space), or stick to the biggest cities in the vertices.

While yes, it will make intergalactic travel easier, but controlling the expansion of the universe could have disastrous results. If there's too much gravity, then such a megastructure would threaten to cause the Big Crunch. And the species being immortal would bring up another issue: As they have potentially-indefinite lifespans, they will reproduce far slower than humans, so if there is something capable of severely reducing their population, it'll take a very long time for the population to regrow. So, they'd be more vulnerable to extinction than a mortal species, as by the time the next big calamity occurs, they don't have as much numbers.

Not the answer you're looking for? Browse other questions tagged science-based universe .

8
Liquid universe: The beginning
20
Universe where mathematics is different
9
Repulsive Universe
53
Implications of Newtonian universe
1
Escaping the universe
9
What would shake a galaxy and what would shake the universe?
6
Parallel universe portals: an infinite hall of mirrors?