Ask Question
Asked 3 months ago
Active 3 months ago
Viewed 102 times
-2
$\begingroup$
Closed. This question is off-topic. It is not currently accepting answers.

Would it be possible to create an andalite using gene editing or evolution? An andalite has the following features: 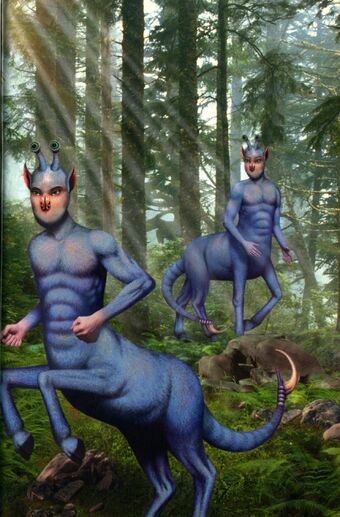 Your creature is very interesting, and mostly plausible.

Items that are problematic:

If you really do need to make them mouthless, and absorbing all their nutrients from the environment via contact, may I suggest a large, soft region of the underbelly that serves this purpose? The Andalite would then "eat" by lying down on a nice succulent patch of foliage or grass. This way, they are using a much larger organ for the absorption, one which is not burdened by also being a weight-bearing support, and which can channel the nutrients directly to the abdomen. It also gives them the ability to choose to not "eat" if they are on something distasteful, whereas the eating hooves concept would make them incredibly vulnerable to poison on the ground, etc.

I particularly like the second set of eyes on stalks. Likely to be used for 360-degree surveillance of their environment, praticularly sensitive to movement but not very good for close vision, I assume? This allows the front-facing eyes instead of typical non-hunter side vision, greatly aiding them in becoming tool users.

All the rest of the features described seem plausible and mostly practical, with easy evolutionary pathways to forming them. Well, except the telepathy, but then I'm just a descendant from a tree-climbing ape, so I don't know about telepathy.

Not the answer you're looking for? Browse other questions tagged anatomically-correct or ask your own question.