How to effectively defeat an alien “infection”?

I was thinking on the classic alien mass which spreads throught almost any surface, and in contact with live beings, it doesn't consumes them, but takes control of their minds in order to vary the means of spreading, which also can be the ability to control complex machinery.

On my story, a contamined alien ship falls on a planet, and something on it would harm the infection enough to the main "host" be able to wake up from the mind control.

I am trying to imagine a "natural" way to stop it, as if it was original from that planet itself, instead of something made by intelligent life beings. Also, consider it without any magic or similar. My first idea was simply a different type of crystals, which these could be harmful to the infection in some way, but I decided to see if there is better ways to deal with it, intead of having these crystals scattered around the surface of the planet.

I am open to ideas, doesn't need to be scientifically accurate, only rational enough to work.

Edit: Well, this is my first question, so I didn't knew how to make it properly, I ask apologizes(my first language isnt english, so bad grammar may happen)

The disease was found in an abandoned asteroid, by a team trying to mine its resources. It is resistant to fire and can grow at fast speed in vacuum, however it still can grow in atmosphere. It is fully sentient, and works as a hive mind, until he gains control of the protagonist, using him to achive goals of further spread, as he is expert in controling spacecrafts. The disease also can grow tentacle-like parts in order to hold the "victim" and other objects of its interest. Some parts of it has "blob" like substances, these can explode and send parts of the infection further away, ir instantly contaminate the target.

When I said "harm it enough to wake up the main host", I meant that it was in control of the protagonist, and the crash in the planet made able to him break free from the disease, because of the factor in the planet.

A bacteria or another microbe.

Viruses and parasites are highly specialized so I don't recommend them. A bacteria or microscopic fungus, on the other hand, could feast on a compound of the "alien mass" and bar it from functioning properly.

The choice is yours!

In short, it allows for a lot of flexibility in your story.

I think you'll find your best answer in the parasites of earth - there's a large number that induce complex behaviours in their host species, such as Ophiocordyceps unilateralis, which takes control of ants, forcing them to infect their own nests, before crawling somewhere to die and release their spores

This fungus also has a hyper-parasitic fungus (i.e, a fungus that infects the parasitic fungus) - this limits its growth, and can kill it. It'd be very reasonable for aliens to have a similar organism.

What would be interesting is, that if all your aliens form a hive controlled by this parasite, an infection that clears the parasite would be terrifying to them - members would suddenly regain shudders free thought, and lose the sense of the collective hive. The parasite might, for them, even be closer to a symbiote, giving them the capacity for higher level, collective thought. This would also explain the ship crash - a ship full of aliens got infected by this, and turned on each other, destroying the controls and causing the ship full of the hyper parasite to crash land.

Yes, I stole this right from The Thing. But it works fine here. On landing, the ship is damaged and climate control is damaged. It gets really cold.

The parasite deals with cold less well than the host. The parasite is stunned into torpor. The host is also greatly slowed but is able to throw off the effect of the parasite to some degree. The host is far from in control of its full powers but is aware enough to understand what happened, and that it must stay very cold if it is to stay in control.

Nuke it from orbit

It's the only way to be sure. You can use a Tsar Bomba at full power. At 100 megatons, the blast radius would likely be appropriate. You can simulate it by using NUKEMAP. I put it besides Los Angeles to give you an area of the area you could cover: 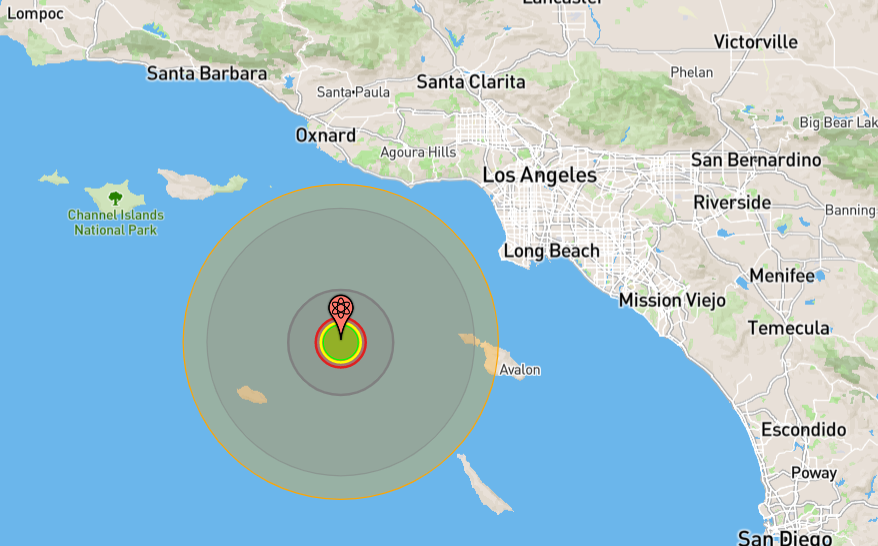 Infections, alien or not, are a social issue. And in the words of the wise Vaarsuvius:

As the size of an explosion increases, the number of social situations it is incapable of solving approaches zero.

I am slightly vague on the details of your question (sorry) but I think you need to treat your alien infestation like an aggressive invasive species outside of it's native environment. Ecosystems where conditions are more favorable for an organism than it's own native environment cause uncontrolled exponential growth in a population. So you need to reestablish stability.

I'm going to say your infestation (parasite) has a natural predator. That can be as simple as a fungus that coinfects the host, killing the parasite, to a sentient "parasite eater" that may either kill the host (decimating the population) or extract the parasite from the living host (preserving the host for re-infestation and a repeat of the infection cycle).

The predator may be seeking out the parasite to feed on it, either as a secondary infection or as a separate independent being. It could compel the coinfected parasite/host to seek out and coinfect other hosts. If it's intelligent, it may have piloted a ship to the planet itself. A new pattern of infection/coinfection, or infection/predation will establish itself. This may mean the planet has a permanent low-grade infection, or the cycle could wipe out the parasite on the planet, and the overall life cycle relies on reinfection and spread of the parasite from planet to planet (depending on your desired outcome - permanent parasite/predator presence OR clearing of the planet until reinfection).

If you have a fungus model, intelligent natives may maintain a supply of fungus to fight off future infestations. In an intelligent predator model, the predator may have its own agendas, possibly wanting to maintain a constant chronic infection to maintain a food supply (farming parasites, essentially). This is particularly nasty in the case where the predator kills the host, as the predator might be breeding, maintaining and deliberately infecting the population with parasites.

If the predator leaves the host alive, I could even see a religious symbolism to the whole thing. The predators may be seen like gods or angels, setting people free, while the parasite is evil or the enslaver. Perhaps the culture even embraces the cycle, where the young are symbolically infected, then ritually freed by the predator.

I'll dumb down controlling to two ways. One is with hormones and such. (Gut) bacteria, virusses, fungi and the like can influence the body. Rabies makes people avoid water, mac donalds creates gut bacteria that prefer mac and thus a fraving for it (just a branded example), there's bacteria that can infect rats and humans to hang out more with cats and cordyceps fungi that take over mostly insect hosts and your nightmares after seeing youtube video's.

The second one is direct brain control. This requires connection to the brain in some way.

Both suffer from the same problem. An organism that isn't native to the host, meaning it's likely susceptible to different conditions. They can themselves be targeted by bacteria, fungi, virusses or even just a different environment. Getting warm, cold, humid or dry, a different diet or an infection can all lead to a disruption of the controlling organism. It can even be the controlled body to become sick, altering the way it needs to be controlled. For reference, getting hungry will already change the way neurons behave, making you see and do different things than when you were not hungry.

What this means is that it can be any reason you like. A fungi able to penetrate the defences of the controlling organism? Just a bad reaction to getting rained on? Without further information on the organism, you have more of a dilemma of choosing the right kind compared to one at all. The rejection or losing of control can be sudden or gradual, as well as partial or full. If my boss loses control over me when he gets food poisoning from those bad shrimps or my other boss from his allergies, why not a controlling organism to the spicy food youre eating (a defensive mechanism of a plant). The host might just be better at handling that.

Not the answer you're looking for? Browse other questions tagged science-fiction environment or ask your own question.

12
How to remove Saturn’s rings?

57
Would a fighter pilot with an invincible space ship be able to conquer the galaxy?
31
How to effectively slow down a ship about to shoot through the Solar System at 0.6c?
19
Can a world government convince a modern public to support the creation of child soldiers?
3
How to expose a shapeshifting alien
7
How can a demonic viral infection spread throughout the body without being noticed?
45
What is my malfunctioning AI harvesting from humans?
5
Correct Handling Of Alien Invasion's Afteraffects