How could be a relatively "universal" eye?

In searching of a universal eye, I meant a photoreceptive organ which can have all/most of the best capacities of the known eyes.

So, each type of eye or photoreceptive organ has a different function or specialization, for example the human eyes are one of the best for combining multiple characteristics like resolution and color vision, enough long distances vision but not as an eagle, meanwhile in the other hand, mantis shrimp can detect different wavelenghts outside the human color vision like infrared and ultraviolet. Eagles have an excellent long distance vision, and other birds like owls have the best night vision with highest concentration of rods and cones. Other cases are different eye shapes like the chameleons which developed multidirectional eyes and passing a different shape to the pupils confers different characteristics, predators have rounded pupils for focalizing light, while preys have squared pupils for a near to 360° vision.

And there are more examples that I don't probably know, so I was searching for a "perfect predator" (concept can change), and I found an idea from this guy: 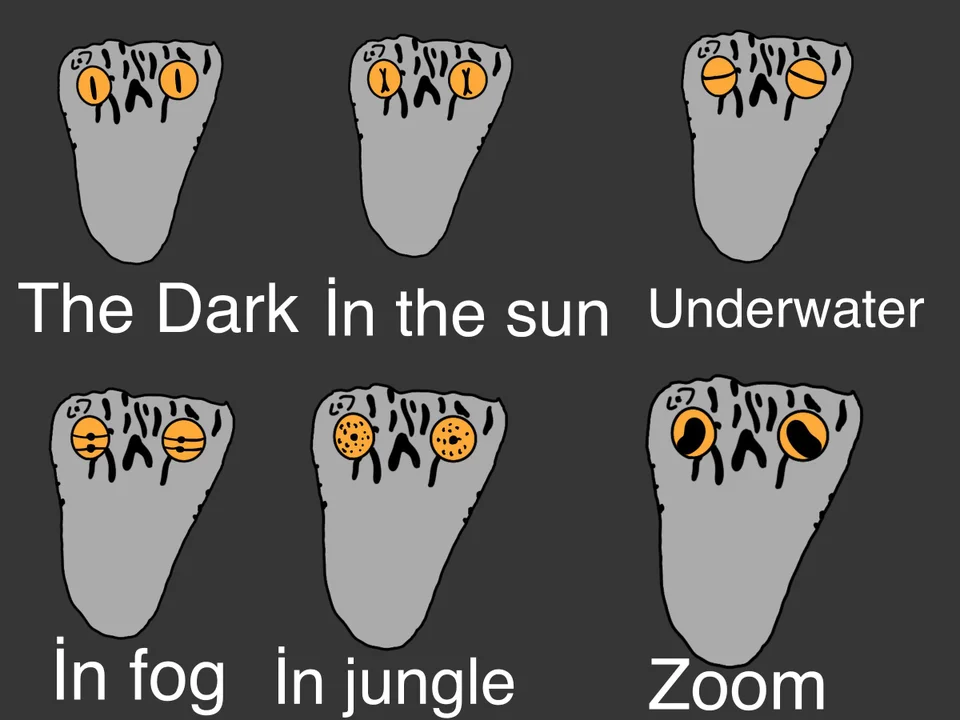 This concept correctly fits what I'm looking for, but I don't know if it's possible, so probably I can retake the concept and change some things that could "upgrade" it for my objectives, but still existing problems about a "shape changer pupil", things that I don't how solve or how could work like the configuration of a tapetum lucidum, cones and rods and nervous arrays.

But also you don't need to be abide to this concept, you can answer what set of characteristics you can consider a "perfect eye", because should be emphasized that many characteristics for an eye could be solved for other organs, for example birds can't roll their flat eyes but some have a great neck rotation, snakes have thermal detectors and in some occasions, echolocation could be a better choice than excessive good light capture for nocturnal vision.

Happens that in one of my currents projects I want to use this eye for a plausible "perfect organism" (current concept could change to perfect human or perfect apex predator), for which later I will present the set of characteristics that I have selected in a different post, because I believed that this eye deserved its own questioning. Also an explanation of how this could evolve is not necessary or obligatory. That could be fine but it's not necessary, this can even be explained in terms of genetic engineering.

First of all, Thanks.

So the potential barriers to this are speed—getting destruction and regeneration down to a few minutes at most—and instructing the host/stem cell, both of which are reasonably handwaved away by invoking an alien metabolism and evolution of specialized optic nerve–brain synaptic connections.

Some things to consider:

I'm afraid that rather than not being possible, it's simply not advantageous for something you plan to be the perfect predator to need to reconstruct its eyes depending on what it wants to do. Let's assume it's hunting prey with sight alone: it will likely want to see ultraviolet so that it can see traces of urine and better tell a camouflaged prey from its hiding place, and infrared in case it's prey is warm-blooded to further aid in tracking it and telling it apart from the vegetation it camouflages against. It was successful and hunted it, now it wishes to hunt underwater, so it must deconstruct its eyes and rebuild them into something more adapted to underwater hunting, except it's previous eye already had traits also used to hunt underwater, such as a large pupil and high number of photoreceptors, so it's waiting both an unnecessary amount of energy and an eye structure that was already mostly fitting for the task, with the biggest matter being its ability to operate in water and the percentage of cones and rods in it.

You see, looking at a creature's eyes, how they work and how they're positioned can tell you a a few things about it, sometimes even hinting how it lives (example: creatures with forward facing eyes usually need good depth perception, and is a trait seen both in many predators as well as in some arboreal creatures which need to be able to calculate the distance between 2 branches). Going a bit away from earth biology as we know it, the potential eyes of your "perfect predator" and it's very name seems to tell me one thing: your creature is most likely a carnivorous shape-shifter, which can and will change its overall shape according to the environment it's in and what it's hunting, which is the only way I can see it being capable of giving any predator which is already highly adapted to their niche a run for their money: mimicking their millions of years worth of adaptations on the fly so that it can have a chance to outcompete them to begin with. However since it's a science-based question I'll stop approaching this scenario, as no creature over 50 cm long (because I'm not sure about certain smaller creatures) on earth, as far as I know, can actually change its entire structure on the fly and to such a degree like this hypothetical hunting machine does, with the closest to a living example being the mimic octopus (which can mimic the appearance and behavior of several creatures in its habitat on top of its camouflage abilities, but that's about the limit of how much it can "become" the creatures they mimic).

Now, putting aside how the rest of its body works and simply assuming its vision is the most important factor on whether it can hunt something or not, it still doesn't look practical, simply because we're talking earth biology here. Even if we're talking about a bioengineered creature, I still think a single pair of eyes which can change :

1- while several eyes are much more costly to maintain than 1,they also ensure you're always ready to make up for said cost. If you need to hunt a creature, whether it's in land, in water, in bright or dark conditions, it will always be ready to use the eyes it needs. Meanwhile if the single pair creature needs to leave the water to hunt on land for some reason, it will need to first adapt its eyes, which takes a good amount of time and also a good amount of energy (remember it's basically destroying the previous eye structure and forming a new one in every change), and while I can't tell exactly how costly it is or how long it'd take due to not remembering any good real life comparisons, it sounds superficially like a reasonable disadvantage for not too big of a difference in energy efficiency, especially if it needs to change its eyes often enough to have developed this ability to begin with, assuming a natural evolution approach. The only advantage I'd see here is if it was bioengineered, and simply had it but didn't use it too much that it became too costly, at which point it might have been better to just make different versions of the creature adapted to different conditions.

2- animals often don't only use their eyes to see the world. For this let me use one of my favorite animals: the vampire bat. It is considered to have good vision, especially at night, but it also has great hearing, which is good enough to both let it echolocate its way through the darkness as well as to find animals it has fed on previously simply by the prey's breathing. Once it finds the prey, it will use infrared sensors on its nose to locate blood vessels closer to the skin surface, which it will cut open and use to drink the animal's blood. In this simple example he have a naturally occurring creature using 3 different sensing organs/structures to hunt. Truth is: few creatures will rely solely on a single sense to find food or to live its life. You want eyes which can see ultraviolet and infrared? Why not leave ultraviolet to the eyes while letting the infrared to a pair of pit organs? Do you really need to have good night vision or can you make up for the lack of it with echolocation? If you can't even see your prey, why not listen for or sniff for it? Simply handling every aspect of navigation and hunting to the eyes alone sounds like a poor choice of design, and is not something we actually see often in nature, which helps demonstrate how it's not always a good idea. Even some owls, usually known for their great vision, will also rely on their ability to hear in 3 dimensions to hunt prey hiding under the snow.

Now: whether it can actually happen: I don't think a pair of eyes which can just digest and reform themselves according to the environment the creature's in are an efficient alternative, nor do I think it can occur considering earth biology alone. The closest thing from this alternative which could actually work in reality, as far as I see (ha? Haaaaa?), is to have a creature which, via a weird evolutionary history (which likely evolved an ancestor which had to live and navigate between drastically different environments) or simply via bioengineering, ended up having multiple pairs of eyes, with each pair adapted to a different environment (in your creature's case, around 3 to 4 pairs I'd say).

In regards of my vision of a perfect eye: ideally one much like the one you wanted, capable of changing according with the environment the animal's in, but on a more realistic perspective, the perfect eye is an eye which attends the needs of the creature, and which works in conjunction with other senses to form a full picture.

Not the answer you're looking for? Browse other questions tagged science-based reality-check creature-design evolution genetic-engineering .

5
How would different kinds of eyes (polycoria, differently shaped pupils, etc.) work?
2
The Rods and Cones on Equal Terms
8
Convergent Eye Structure in Aliens?
28
A fast aquatic predator with multiple eyes and pupils. Would these eyes be possible?
10
Anatomically Correct Color-Adjustable Eye
5
Can a Robotic Eyeball Be Created that Perfectly Replicates Human Vision?
0
Can a flying predator have slit-like pupils?
7
Vampire vision comparable or superior to human vision at night
5
How much can I expand human color perception by adding new photoreceptors?