Destruction of a Trojan Asteroid by an RKV

During the Great War between two nations, one sent an RKV (Relativistic Kill Vehicle) towards an enemy factory as a message to show their power but not kill needlessly. The base was in a Lagrange point that contained several asteroids greater than 10 km diameter. The asteroid that was hit was around 100km in diameter and roughly the average density of an asteroid (2000kg/m3).

The end result: the asteroid split and debris was sent out and created a small asteroid field, similar to what you see in Star Wars as opposed to the sparse distribution of our Asteroid Belt.

Safe to assume it's completely gone

This diagram (source) helps indicate the gravity wells of the respective lagrange points and the relative stability of the system. Your trojan asteroid is at the L4 or L5 mark: 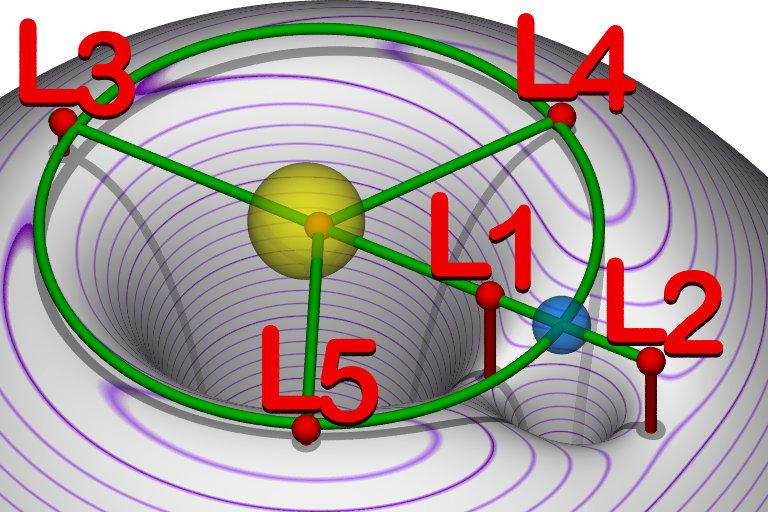 Conceptually, L4 and L5 is at the top of a giant hill. If chunks of the asteroid are accelerated away from L4 or L5 following such a collision greater than the escape velocity of the asteroid, they will likely fall into one of the other two wells within your 100 year timeline.

When someone gets shot in a Hollywood movie, they sail across the floor, or spin around, or do something that generally has no bearing on reality. What actually happens, because the mass of the slug is so much lower than the mass of the human being, is stand there until their body's perception of the damage catches up, then they fall over. The more energy you put into the slug, the more likely it's going to simply pierce the body. Oh, there's a boat load of collateral damage along the way — but the back of the body won't see a cone-shaped hole (much less be blown apart) unless the slug is somehow explosive.

And that's what an RKV is — explosive. When it hits the planet it starts turning things into hot, expanding plasma. But the same fundamental rules of physics (even at relativistic speeds) apply. There's only so much mass to convert to energy and there's only so much time before the mass exits the asteroid. And, IMO for the sake of your story, you want something to exit the asteroid.

You want, simplistically, a projectile with layers of different density materials so that they convert into energy, creating plasma, as the projectile goes through the asteroid. And you want that to happen intentionally. For example, if you design the layers such that the majority of the mass is converted near the center of the asteroid, then you get a very thorough and satisfying destruction of the asteroid. The last bit of mass wants to exit the asteroid to ensure the distribution.

But that means you have the equivalent of a shaped charge and can control — to a degree — the direction of destruction. In other words, if all the mass converts on the surface, you'll blow the asteroid to pieces, but most of the pieces will go sailing off into space away from the planet. If most of the mass converts on the other side of the asteroid then the explosion blows all those pieces toward the planet (assuming a straight-line projection, which obviously isn't true). My point is, you do have some control over where the pieces of the asteroid go.

There are two problems with what I just said. The first is that even if the RKV magically converts no mass to energy, it's creating a whomping lot of heat converting the mass of the asteroid into energy — mostly in the form of super-heated plasma through the process of friction. That conversion to energy isn't controllable and will generally create an expanding cone with the short end toward space and the wide end toward the planet, forcing the asteroid away from the planet. (Granted, this process at relativistic speeds might be fast enough that the cone-shape doesn't effectively form. In that case the model is one of an expanding cylinder.)

The second significant problem is that the angle of approach has as much to do with that explosion as the conversion of the RKV mass to energy. If you want those pieces to stay in orbit around the planet, then ideally you want to strike the asteroid on a tangent to the rotation of the planet. This might get in the way of your story. It would likely mean (well, relativistic speeds, so maybe not) that the base can see it coming. Maybe. How fast is that RKV going and how are you keeping it along an arc near a planet at such short distances? The faster you go, the more time you need to make a turn. But... angle of approach, which complicates the shot. But at least more of the pieces will stay in orbit around the planet. Except...

Gently hitting an asteroid with an RKV such that it carefully splits apart and remains within the lagrange point is, frankly, unbelievable. Which means that while everything I just said might be interesting, I suspect it's also moot.

An object in motion stays in motion unless acted upon by an outside force.

A lagrange point is a location where gravitational forces are somewhat balanced such that things can "hang out" there without the necessity of orbiting and neither be lost to nor sucked in by the planet.

And you just gave them momentum.

But you shouldn't let any of this stop you from telling a good story. It's your world. If you want the RKV to just barely burrow to the center of the asteroid and go "pop" such that the pieces remain in the lagrange point — do it! The number of readers who realize how unlikely that would be are so low that you shouldn't care about them. Besides, they're willing to let a lot of things slide for the sake of a good story.

Not the answer you're looking for? Browse other questions tagged gravity orbital-mechanics astrophysics kinetic-weapons or ask your own question.

8
How would the sudden destruction of Mars affect Earth?
5
Designing a binary asteroid pair
2
What direction is my asteroid coming from?
4
The Source of Gravity Based Destruction
6
Energy costs of giving Mars and Venus moons: moving gas giant moons vs. capturing a rogue planet?
5
“Landing” a small asteroid on Earth
4
Asteroid in the asteroid belt suddenly gains the gravity of the earth
7
Concerning asteroids and a trojan habitable planet